Squishy is among the oldest and most ubiquitous enemies of the Kirby series, making its first appearance in Kirby's Dream Land, the first game of the series, and appearing in most main series titles since then. Squishy's classic look is of a white squid with two thin eyes, though in more recent titles, it has gained more distinguishing features, including a cream body color and blue spots on its head. It can operate both on land and in water, as well as occasionally fly through the air. On land, it usually jumps or waddles about, attempting to collide with Kirby. In the water, it will swim in bursts, rather than at a continuous pace. It does not yield any Copy Ability when swallowed.

Sometimes, Squishy is replaced by a more formidable enemy that mimics its behavior, called Flotzo. This is the case in Extra Game in Kirby's Dream Land, and in Revenge of the King in Kirby Super Star Ultra. In earlier titles, Squishy could be seen swimming in water or flying through the air. Starting with Kirby's Return to Dream Land, however, these enemies became strictly aquatic swimmers, and are no longer able to fly, instead becoming grounded if found outside of water.

Squishy makes its debut appearance in the very first Kirby game. Here, it can be found in the Float Islands stage, where it can be seen swimming through water, jumping out of water, and floating through the air. Subsequent titles would remove Squishy's ability to fly through the air like this.

Squishy is worth 400 points when defeated. In the Extra Game, it is replaced by Flotzo. 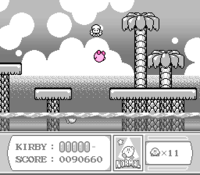 Kirby leaping past a Squishy in Kirby's Adventure.

Squishy returns in this title and its remake, serving as an amphibious foe who is just as at home on land as in the water. It retains its ability to leap, and can waddle around on dry land as quickly as a Waddle Dee.

Squishy is a comparatively rare enemy in Kirby's Adventure and Kirby: Nightmare in Dream Land, appearing in only a few stages. Strangely enough, it is not found anywhere in Ice Cream Island or Orange Ocean, despite being an aquatic foe who would be at home in those levels. Squishy can be found in the following levels and stages:

Squishy (known here as Squishy Squid[1]) makes an appearance in Poppy Brothers' Land. It initially appears inside a thought cloud of one of the Kirbys on the board. If the Kirby is hit while Squishy Squid is in there, it will be released into the middle of the board, where it can help Kirby reach the higher board.

Squishy Squid also makes an appearance in the mini-game of the same board, as the goalie on a soccer field. Kirby's job here is to try and get past the squid and into the goal. If the squid catches Kirby, it will throw him back toward the bottom of the board. 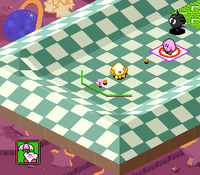 Kirby aiming for a Squishy in Kirby's Dream Course.

Squishy appears as a common enemy in Kirby's Dream Course. It does not provide any ability when defeated, and always remains stationary, like many other enemies in the game. In this game, it functions the exactly the same as Kabu, Broomhatter, and Waddle Dee.

In Kirby's Dream Course, Squishy can be found in the following courses:

Squishy appears as the opponent of Stage 5 in this game. It plays by attempting to line up blobs such that they string together in fours, creating chains of eight total.

Squishy appears in this game, occupying the same role that it did in previous main-series titles. It is once again just as at home on land as it is in water.

Squishy can be found in the following levels and stages:

In this title, Squishy appears as a pre-boss enemy in Stage 2, and is worth 5000 points when defeated. It is followed by a Big Squishy boss.

Squishy returns in both of these games as a common enemy, largely unchanged in basic look and behavior from its previous appearances.

In Kirby Super Star Ultra's Revenge of the King, Squishy is replaced with a similar enemy called Flotzo. Squishy also appears on a card in Kirby Card Swipe.

Squishy makes an appearance in this game, bearing a more yellow hue than usual. It behaves largely the same as in previous games.

In Kirby's Dream Land 3, Squishy can be found in the following levels and stages:

Squishy makes an appearance in Kirby Tilt 'n' Tumble. Since there are no "underwater" sections in this game, Squishy instead attacks by popping out of opaque water pools to try and ambush Kirby. It usually either sits in place or will charge forward, but can be easily defeated by ramming it with a burst of speed from the raft.

Squishy returns in this title, bearing its behavior (though with a slightly changed color) from Kirby: Nightmare in Dream Land. There is only one Squishy in the entire game, however, appearing in Moonlight Mansion - Room 17. Kirby must swim and stay afloat in a certain region underwater, and that Squishy will slowly swim up.

Squishy appears as a somewhat common enemy in Kirby: Canvas Curse, usually found in water. It has the same look and behavior as it always has.

In Kirby: Canvas Curse, Squishy appears in the following locations:

Squishy appears in the Kirby Mass Attack Sub-Game Kirby Quest, showing up as an opponent along with Flotzo and Sweet Stuff in Stages 23 and 33. It has 80 HP.

In the main Story Mode, there is an enemy that is very similar to Squishy called Squister. These two are not to be confused with each other.

Squishy makes its first appearance in 3D in Kirby's Return to Dream Land. From this game onward, Squishy returns to having a yellow-ish tint as in Kirby's Dream Course and Kirby's Dream Land 3 and now has blue dots on the top of its head.

In Kirby's Return to Dream Land Squishy can be found in the following levels and stages:

Squishy remains the same as in Kirby's Return to Dream Land, except now it has the ability to jump between the foreground and background.

In Kirby: Triple Deluxe Squishy can be found in the following levels and stages:

In Kirby: Planet Robobot Squishy can be found in the following levels and stages:

Squishy appears in this title as a common enemy. It can be seen holding still, waddling about, or jumping in great leaps. It is worth 100 points when defeated solo, with multiples of that awarded for appropriate combos.

In Kirby Star Allies Squishy can be found in the following levels and stages:

Squishy in Kirby and the Forgotten Land.

Squishy returns as an enemy in Kirby and the Forgotten Land, with a similar look and the same general behavior as before. Notably, Squishy now has a subtle "cheek" blush, similar to Kirby, and its spots are more colorful.

In Kirby and the Forgotten Land, Squishy can be found in the following stages:

Squishy appears as a monster in the episode Dedede's Raw Deal. Here, it is much larger than its video game counterpart (although it initially appears as a sushi topping). It is sent to attack Kirby after he eats a sweet potato, which gives him the hiccups and makes him unable to inhale, and thus unable to fight back properly. Squishy attacks Kirby by grabbing him with its tentacles and throwing him around. It can also shoot balls of lightning at him, which makes it similar to Master Green in this appearance. Lastly, Squishy has the ability to fly through the air, though this ability is not used until it tries to flee.

After Kirby is scared by Tiff out of his hiccups, he is able to inhale one of these lightning shots to gain the Spark Copy Ability. Using this, Kirby deals a rapid volley of electric blasts which defeats Squishy, turning it into many cuts of calamari that rain down onto the ground. In the Japanese version, Squishy is capable of speech, though it mainly just repeats the phrase (translated) "Squid Spark".