Noddy is a sleepy enemy with no arms and a night cap who appears frequently in the Kirby series. In every game it appears in, Noddy is well known for inducing the Sleep ability when swallowed by Kirby. It, unlike many other enemies, does not try to attack Kirby, but can hurt him if he walks into Noddy, or if Noddy accidentally walks into him.

Noddy resembles Kirby but has yellow feet, no arms, a slightly different shade of pink and wears a different color night cap, usually orange and yellow. Noddy's eyes are also more round and spread out on its face than Kirby's and has an off-white cheek blush as opposed to Kirby's rosy pink or magenta.

Noddy is not inclined to move very much. It prefers not to walk off of ledges and will not try to jump. As expected, Noddy spends most of its time asleep, making it very easy to avoid. Noddy is capable of jumping if possessed by Ghost Kirby, but interestingly enough, it assumes its 'sleeping' pose while jumping.

Kirby sleeping aside a few Noddys in Kirby: Nightmare in Dream Land.

Noddy made its debut appearance in Kirby's Adventure and also appeared in the remake, Kirby: Nightmare in Dream Land. Here is where its look and characteristics were established. Noddys appear in several colors, including green.

Noddys are very uncommon enemies, though large numbers of them are found in Rainbow Resort. Noddy can be found in the following levels and stages: 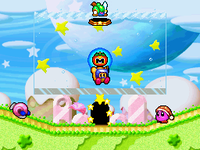 Kirby swimming near a Noddy in Kirby Super Star Ultra.

Noddy reappears in Kirby Super Star and the Nintendo DS remake, Kirby Super Star Ultra. Noddy is found in every main game except Gourmet Race. In Milky Way Wishes, Noddy is one of the few enemies that can provide an ability when swallowed, and swallowing two at once allows Kirby to get a Mix, bypassing the Copy Essence Deluxe requirements for that mode.

In Kirby Super Star Ultra, Noddy also appears on one of the cards in Kirby Card Swipe.

Noddy appears in this game, and can usually be found sleeping on courses in Air Ride mode.

In Kirby Air Ride, Noddy can be found in the following places:

Noddy returns in these games, appearing and functioning exactly as it did in Kirby: Nightmare in Dream Land.

In Kirby & The Amazing Mirror, Noddy can be found in every major area of the Mirror World except for Moonlight Mansion, Cabbage Cavern, and Olive Ocean.

In Kirby & The Amazing Mirror, Noddy can be found in the following rooms:

In Kirby: Squeak Squad, Noddy can be found in the following levels and stages:

In-game capture of Noddy from Kirby's Return to Dream Land.

Noddy appears in this game, acting much like it has before and sharing a more-or-less unchanged look throughout. Given its status as an enemy that provides a limited-use ability, it does not see much time in the spotlight unlike its more permanent-ability comrades.

In Kirby's Return to Dream Land Noddy can be found in the following levels and stages:

Noddy appears in the New Challenge Stages Sub-Game, unchanged in its look and behavior from its appearance in Kirby's Return to Dream Land. 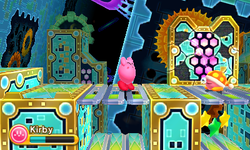 Kirby taking a break near a sleeping Noddy in Kirby: Triple Deluxe.

Noddy appears in these games largely unchanged from its appearance in Kirby's Return to Dream Land.

In Kirby: Triple Deluxe Noddy can be found in the following levels and stages:

In Kirby: Planet Robobot Noddy can be found in the following levels and stages:

While Noddy still gives the Sleep ability in Kirby Star Allies, Kirby cannot use Friend Hearts on it, and it is not available as a playable character. Attempting to toss a Friend Heart at one will turn the Noddy into a Sleep Ability Item for Kirby to pick up and use.

In Kirby Star Allies Noddy can be found in the following levels and stages:

Noddy in Kirby and the Forgotten Land.

Noddy returns as an enemy in Kirby and the Forgotten Land, providing Sleep as usual. Noddy is usually found sleeping, but may slowly lumber in Kirby's direction when startled.

In Kirby and the Forgotten Land, Noddy can be found in the following stages:

In Kirby's Dream Buffet, Noddy appears on a Character Treat, using its artwork from Kirby: Nightmare in Dream Land.

In The Pillow Case, King Dedede receives a gift from Night Mare Enterprises for being a loyal customer. This gift happened to be pillows that make whoever sleep on them have nightmares about Kirby, and, eventually, make them want to get rid of him. Later in the episode, they find out that the reason the pillows do this is because there are Noddys inside them.

Noddys here have a different color scheme to those in the games, having a yellow body and pink hat. They are also significantly smaller, and able to bounce around rather quickly when startled. After being uncovered by Meta Knight, the Noddys from the pillows bounce into the wilderness.

Noddys also appear in the episode Flower Power, where it is revealed that they are spawned by the flower monster Pukey, in order to lure victims affected by the sleeping sickness induced by the Noddys into its gaping maws. King Dedede describes the Noddys as the Pukey Flower's "berries", which travel far from the host plant to lure victims in.