This article is about the whales in Kirby: Right Back at Ya!. For whales in a more general context, see Whale.

The Whales are two giant creatures which appear in the Kirby: Right Back at Ya! episode A Whale of a Tale. They wind up off the coast of Dream Land when the baby whale goes missing from its mother. Due to the baby's size, it is initially confused by those observing it as the mother, and King Dedede tries to harass it in various ways, first by ramming into it with his whaling ship, then by trying to attach a submarine deck to it. Eventually, the baby whale is able to reunite with its mother, and the two leave Dream Land.

The whales appear to be based on real-world sperm whales in both look and behavior, though they are significantly larger than their real-world counterparts. The baby whale is large enough to swallow King Dedede's cruise ship whole without issue, and the mother whale is a similar scale larger than her child. Though not capable of speech, the whales do appear to understand what other characters say to them. The mother whale also has grass, bushes, and palm trees growing on her back, which makes her resemble an island at first.

The inside of the baby whale is a livable ecosystem full of trash and largely empty of internal organs. This is not realistic, as a real-world sperm whale's stomach is a largely anoxic environment similar to those of other creatures.

Role in A Whale of a Tale[edit] 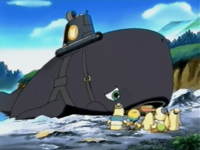 King Dedede transforming the baby whale into a submarine

Main article: A Whale of a Tale

In A Whale of a Tale, the baby whale first appears in Dream Land's harbor, having been separated from its mother. Due to the baby's impressive size, it is initially confused for the mother by the observers after Kine tells them that a baby whale has gone missing. King Dedede brings a cruise ship into the harbor and invites everyone to board, but later reveals the ship to be a whaling vessel intent on catching the whale. However, before any real harm can be done to the whale, it swallows the ship whole, stranding everybody inside.

After Kine negotiates with the whale, it lets everyone out in exchange for cleaning the garbage out of its stomach. It is later revealed, however, that King Dedede and Escargoon had the trash recycled to build a submarine deck that is strapped to the whale and forces it to follow the King's commands. After poorly steering the whale, they come within sight of an island out at shore, which reveals itself to be the mother whale. After knocking everyone over with a massive wave of water and knocking the submarine deck off of the baby whale, the two whales reunite and swim away from Dream Land, foiling King Dedede's plans.