Grizzo is an enemy which debuted in Kirby's Dream Land. He resembles a large yellow bear and walks on all fours. Additionally, he wears a headband, and on his back, he sports a pair of red stripes. In early appearances, he is a standard enemy, but his first 3-D appearance in Kirby: Triple Deluxe marks him as a large enemy.

Grizzos first appear in Kirby's Dream Land. Here, their official artwork shows them to be light blue with a yellow headband, as well as omitting their stripes, although the latter are clearly visible in the enemy's sprite. Grizzos are only encountered in Green Greens, where they hop around, reducing Kirby's health by two bars should they manage to collide with him. They are sometimes seen bearing Poppy Bros. Jr.s on their back, which does not change their behavior.

Defeating a Grizzo that is being used as a mount enables the rider to continue on its own; likewise, inhaling or otherwise eliminating the rider does not harm the Grizzo. Despite their large size, Grizzos can be inhaled just as easily as most other enemies, and only take a single hit to defeat. 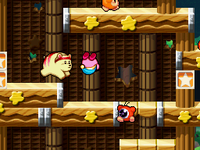 In Kirby Super Star and its remake, Grizzos reappear as common enemies. Here, they are usually depicted with pale yellow fur, as well as red or pink headbands and stripes. They are often found sleeping, though most of them wake up once attacked. When awake, they act similarly to their Kirby's Dream Land incarnation, but are able to charge at Kirby at a very high speed. While they cannot carry other enemies anymore, Grizzos now possess an enormous amount of health, which can make them very time-consuming to defeat. However, in spite of their sturdiness, Kirby can inhale them as easily as most other enemies, although he receives no Copy Ability by swallowing them.

In the Revenge of the King stage of Kirby Super Star Ultra, Grizzos are replaced by the tiger-like Galbels.

In Kirby's Epic Yarn and Kirby's Extra Epic Yarn, Grizzos appear solely in Whispy's Forest late in the game. They behave similarly to their previous incarnations in the Kirby franchise. Here, however, they can charge through Star Blocks.

Grizzo returns in Kirby: Triple Deluxe, though somewhat infrequently. He moves and attacks in a similar manner to his earlier appearances, but can only be inhaled after an extended time into the inhale. He is often seen sleeping, blocking off certain desirable paths or positions.

In Kirby: Triple Deluxe Grizzo can be found in the following levels and stages:

Grizzo returns in Kirby: Planet Robobot, unchanged in function from his previous appearance. There are some cyborg variants, however.

In Kirby: Planet Robobot Grizzo can be found in the following levels and stages:

In Kirby Star Allies, Grizzo returns unchanged from his previous appearances and cannot be made into a friend.

In Kirby Star Allies Grizzo can be found in the following levels and stages:

Grizzo does not appear directly in Kirby's Dream Buffet, but he can be seen on a Character Treat depicting his sprite from Kirby's Dream Land.

Grizzo, as seen in Kirby and the Big Panic in Gloomy Woods!

Grizzo briefly appears as a cameo in the second volume of the Kirby novel series, Kirby and the Big Panic in Gloomy Woods!. Here, his physical appearance is identical to his game design. He appears wandering in the darkness of the Gloomy Woods area within Dream Land during the night, where he comes face-to-face with King Dedede, who had become lost in the woods. Grizzo threatens him and prepares to attack, but is quickly dealt with after Dedede mistakenly smacks him in the dark, scaring him off. Grizzo is not seen again after this.