Beetley is a round creature with two small feet and a beetle-like crest who can be found as a minor enemy in Kirby: Triple Deluxe and Kirby Star Allies. He grants the Beetle ability when swallowed by Kirby.

In many ways, Beetley looks similar to Bronto Burt, but he bears a different color scheme, has more indented eyes, and a beetle's crest on his head. Despite having wings, Beetley does not typically fly, instead choosing to pace along the ground and try to impale any intruders he sees. Beetley, despite his carapace, is not the toughest enemy in the world.

In Kirby: Triple Deluxe Beetley can be found in the following levels and stages:

Beetley returns in Dedede's Drum Dash Deluxe, where he can be seen hovering over the drums in some stages, and will try to swipe at King Dedede when he comes near. As such, Dedede will need to move carefully to avoid crashing into Beetley and incurring a penalty.

In Kirby: Planet Robobot, Beetley appears as one of the game's collectible stickers. He does not appear as an enemy. 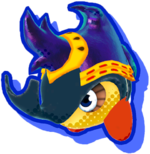 Beetley returns in Kirby Star Allies, where he can now be recruited as a friend. Once recruited, Beetley has all of Beetle Kirby's attacks, and can perform Friend Abilities like Friend Throw.

In Kirby Star Allies Beetley can be found in the following levels and stages:

In Kirby's Dream Buffet, Beetley is depicted on one of the Character Treats, using his artwork from Kirby: Triple Deluxe.