Poppy Bros. Sr. is a Mid-Boss that appears in several games of the Kirby series, debuting in the first installment, Kirby's Dream Land. He resembles Poppy Bros. Jr., but is bigger. He also has slightly longer and more hooked feet than his smaller counterpart and possesses a flat white shirt collar, as well as ligaments connecting his feet.

Poppy Bros. Sr. first appears in Kirby's Dream Land, as the mid-boss in Green Greens. He jumps around mainly in one place, periodically throwing singular bombs at Kirby. On rare instances, he gradually increases the range of his jumps until he reaches the other side of the screen, but always returns to his initial position afterwards. To defeat him, Kirby has to inhale his bombs and spit them back at him three times. In the Extra Game, Poppy Bros. Sr. is able to throw three bombs at a faster rate than normal, and execute an unpredictable dashing attack.

Poppy Bros. Sr. reappears in Kirby's Adventure and its remake, Kirby: Nightmare in Dream Land. Here, he acts mainly the same as he did in his first appearance. However, he is much more likely to perform larger jumps, and if he manages to jump over Kirby, will continue to attack him from the opposite side. To defeat him, Kirby has to spit his bombs back at him or use a Copy Ability. In addition, Poppy Bros. Sr.'s own bombs may hurt him if they explode near him. Inhaling and swallowing Poppy Bros. Sr. after defeating him grants Kirby the Crash Copy Ability.

Although Poppy Bros. Sr. is encountered many times throughout the game (Kirby sometimes having to fight two of them at once) Poppy Bros. Sr. is one of the only three Mid-Bosses in the game to not be fought in any of the Arenas, likely due to giving the player a one-use Copy Ability.

Poppy Bros. Sr. (named Poppy Brothers[1] or simply Poppy[1]) appears as the boss of Poppy Brothers' Land. He attacks by bounding between two small platforms and throwing bombs at the flippers to temporarily disable them. Once hit three times, he splits into two Poppies and continues the fight. Each of them must then be hit three more times to defeat them.

in Kirby's Avalanche, Poppy Bros. Sr. is the first opponent of the Normal game mode. He plays similarly to Waddle Dee, as he does not ever turn his Puyos.

Poppy Bros. Sr. reappears in Kirby's Block Ball as the boss of Stage 4. His attack pattern and movement is very similar to his fight in Kirby's Pinball Land, though he does not split into two. He is worth 50000 points when defeated.

Poppy Bros. Sr. reappears in Kirby Super Star and its remake, Kirby Super Star Ultra. Instead of always throwing one bomb, he is also able to throw three bombs at Kirby at once and may attempt to ram into him like in Kirby's Dream Land's extra game, but not as fast as in said game, in addition to being able to jump over Kirby like in his Kirby's Adventure appearance. Also like in Kirby's Adventure, Poppy Bros. Sr. is vulnerable to his own bombs. In these games, he yields the Bomb ability when swallowed. 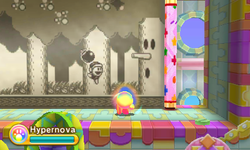