The game begins with a cut-scene showing Kirby venturing through a grassy plain wearing an explorer's kit (a beige hat and backpack), presumably looking for treasure. In his melodious strolling, he fails to notice a deep pit in his path, and walks right into it, falling down in cartoonish fashion. When he regains consciousness at the bottom, Kirby finds himself in a huge cave, thus beginning the adventure proper. Kirby's goal from this point onward is to find a way back out, and maybe obtain some valuable things along the way.

There are a total of 60 Treasures to collect in this game. Collecting them is not necessary to complete the game mode, but obtaining every treasure is required for 100% completion. The game progresses through four primary stages (in the order listed below), with a Boss lurking in each one. The stages are linked to each-other via Cart tracks. Each stage also has a Rest Area, where Kirby can heal up and the player can save the game progress. Once the final boss in the cave - Wham Bam Rock - is defeated, Kirby can then return to the beginning to find a Warp Star leading out of the cave. 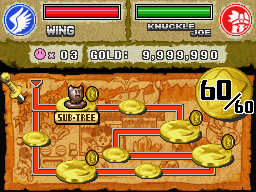 A complete map of The Great Cave Offensive, as seen in Kirby Super Star Ultra.

In the Super Smash Bros. series[edit]

An image showing the layout of The Great Cave Offensive in Super Smash Bros. for Wii U.

The Great Cave Offensive appears as a stage in Super Smash Bros. for Wii U. It is a very large stage, filled with various winding tunnels divided into four primary sections, based on each stage in the main game. Included in this stage are Rotating Cannons, Carts and red hot Danger Zones, the last of which will KO any fighter who touches them with a damage level at or over 100%.

There is also a much simpler version of this stage (known as Ω form) which consists of a single flat platform over a pit, giving it a very similar shape compared to the Final Destination stage.