Windwhipper is a giant windmill-shaped monster who appears in the Kirby: Right Back at Ya! episode One Crazy Knight. It is sent by King Dedede to attack and antagonize Sir Gallant. After the monster breaks Sir Gallant's will and spirit, Kirby steps in and defeats Windwhipper using the Mirror Copy Ability.

Windwhipper is a massive creature which resembles a wooden windmill, but with arms and Kirby-like red feet. Its arms have smaller turbines on them which can shoot rotor-shaped blades that can be steered in mid-air. Its main turbine can be used to create a reflective surface by spinning rapidly. This action can also cause a gust of wind to pick up, though this gust is not particularly strong.

Windwhipper resembles a monster from the Sir Gallant comic books that defeats the titular protagonist in combat. This fact is used to antagonize the role-playing Sir Gallant when it is sent after him.

Role in One Crazy Knight[edit] 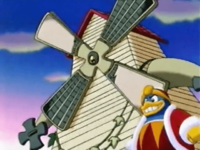 Windwhipper is brought in by King Dedede in order to get revenge on Sir Gallant for attacking him earlier in the episode One Crazy Knight. It attacks Sir Gallant by pelting him with its rotor blades, knocking him down. It then spins its mirror blades to show Sir Gallant his reflection, causing his delusion and his spirit to shatter catastrophically. Later, Kirby steps in to fight Windwhipper in Sir Gallant's stead. Kirby inhales Windwhipper's rotor blades to gain the Mirror Copy Ability. From there, Kirby uses various mirror techniques to confuse the monster, and then finishes it off by slicing it clean down the middle using a Mirror Cut attack.