100% completion is a term referring to the act of completing every objective in a game or activity, whether they be required for normal (any%) completion, or optional side-objectives. This designation may be formal or informal, and in the former case, may not actually require performing every task the game offers (an example being playing the Sub-Games in certain Kirby titles). Aiming for 100% completion is often regarded as more difficult than completing with a lower percentage, though the process can also result in collecting bonus items such as Vitality hearts which make the game easier.

Most titles in the main Kirby series have some sort of indicator of the player's progress toward 100% completion, which may be a percentage in of itself, and may also bestow an honorary title or emblem onto the player's save file depending on this percentage. Titles that track percentage also typically give the player a reward of some sort should the 100% mark be reached. 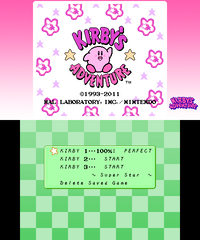 A 100% completed save file in Kirby's Adventure (3D Classics version).

To reach 100% in this game, the player must complete the main game and press all of the Big Switches. Doing so will unlock the Extra Game. Completing the Extra Game does not affect the save file percentage, but the player's rank title will change and the Sound Test will be unlocked.

The following is a list of each rank title the player is given, and at what percentage:

There is no in-game tracker of completion in Kirby's Dream Course. However, an informal 100% could involve collecting gold medals on all single player courses in both the Main Game and Extra Game.

To reach 99% in this game, every Rainbow Drop must be collected, and every Bonus Chance must be completed before finishing the main game.

The last Percent is awarded when Kirby rescues Girl blob/Chao in one of the Animal Friend bags (1 in 8 chance of appearing instead of Gooey).

Upon reaching 100%, the player is awarded with some extra game options on their file. The Sound Test and Boss Endurance modes are unlocked. In addition, all of the Bonus Chances can be played in sequence.

The following are the percentage gains toward 100% Completion for each task in Kirby's Dream Land 2: A 100% completed save file in Kirby Super Star.

To reach 100% completion in Kirby Super Star, all the main games must be completed, with both secret areas unlocked in Dyna Blade (Kirby does not need to visit either of the Trial Rooms or Stage E), all 60 Treasures collected in The Great Cave Offensive, and all 19 Copy Essence Deluxe pedestals collected in Milky Way Wishes. From there, The Arena must also be completed.

Completing the Arena grants access to the Sound Test.

There is no formal percentage gauge for Kirby's Star Stacker for Game Boy, but if all difficulties of Round Clear are completed and Insane difficulty is unlocked in the Challenge and Time Attack modes, Kirby will be given a crown and Star Rod on the title screen. 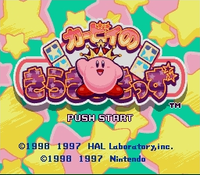 As with the Game Boy version, Kirby's Star Stacker for Super Famicom is marked as "complete" when Kirby gains a crown on the starting screen. The requirements to make this happen are as follows: 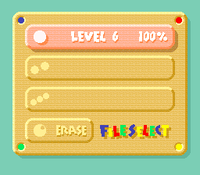 The Sound Test is unlocked after defeating King Dedede, regardless of which ending is obtained.

To reach 97% completion, all Heart Stars must be collected, and the game completed with them, which in turn unlocks MG-5.

To reach 99%, MG-5, which is a rush with all 5 Minigames, and Boss Butch have to be completed as well.

The final 1% is awarded after finishing a game of Jumping (unlocked after beating MG-5) with a score of 10 or above. Doing so will unlock a ? option in the OPTION menu, which lets the player watch all cut-scenes in the game, either separately or one after another.

In Kirby 64: The Crystal Shards, defeating Miracle Matter, regardless of which ending is obtained, will unlock the Sound Check.

To make the save file display 100% completion, every Crystal Shard must be collected, and the game completed. This unlocks the Boss Battles mode and the option to view all the scenes from the game one after another on the Theater.

While every difficulty of 100-Yard Hop, Bumper Crop Bump and Checkerboard Chase can be unlocked and beaten, all of the Enemy Info Cards can be collected, and the Boss Battles mode can be beaten, none of these feats have any influence on the 100% meter.

To reach 100% completion, the game must be completed after collecting all 32 Red Stars in both the normal mode and the Extra Stage. Doing this will change the background color of the title screen to pink.

The 100% completion screen for the Normal Game in Kirby: Nightmare in Dream Land.

The 100% completion screen for the Extra Game in Kirby: Nightmare in Dream Land.

To reach 100% completion, both the Main Game and Extra Game must be completed with every Big Switch pressed. Meta Knightmare does not have to be completed, but can be considered an informal goal after clearing the game.

To reach 100% completion, the Checklist for all three modes must be completely filled in. Use of purple checkbox fillers is allowed, but not using them can be considered an informal 100%.

The 100% completion image from Kirby & The Amazing Mirror.

To reach 100% completion, every room in every world must be explored, every Big Switch must be pressed, and every Treasure Chest must be opened, in addition to defeating the final boss. Playing the Goal Games is not required.

Reaching 100% completion rewards the player with a prompt from the game featuring an illustration of all four Kirbys in celebration. It also unlocks the Boss Endurance mode. 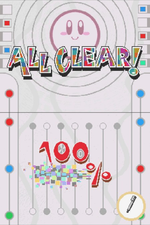 Merger of the screens presented upon 100% Completion of Kirby: Canvas Curse.

To reach 100% in Kirby: Canvas Curse, all 250 Medals must be collected. To accomplish this, the following tasks must be performed: 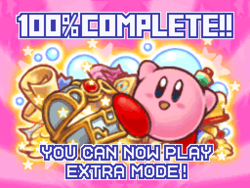 The screen that appears after obtaining 100% completion.

To reach 100% completion, all 120 Treasure Chests must be obtained in the Main Game, and the game completed. While not required, after achieving 100% completion, the Extra Mode and Boss Endurance subgame are unlocked, and could be considered an informal 200%. 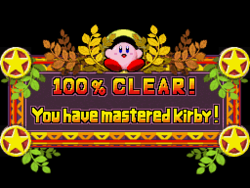 The screen that appears under the Kirby Master video.

To reach 100% completion in Kirby Super Star Ultra, all the main games must be completed, with both secret areas unlocked in Dyna Blade, all 60 Treasures collected in The Great Cave Offensive, and all 19 Copy Essence Deluxe pedestals collected in Milky Way Wishes. From there, The Arena and The True Arena must also be completed. Helper to Hero only needs to be completed once.

To earn 100%, each stage must be completed with a Medal of any rank, with all Treasures found. In addition, Kirby must fully upgrade Quilty Court, complete all of the neighbors' games, and obtain all the extra Furniture, Music, and Fabric. Decorating Kirby's Pad is not required.

In Kirby's Extra Epic Yarn, additional requirements to the ones listed above include collecting all 55 extra pieces of furniture by saving all 250 Life Pieces in Devilish Mode and completing all 36 Fuse Bead Mats by playing Dedede Gogogo & Slash & Bead. 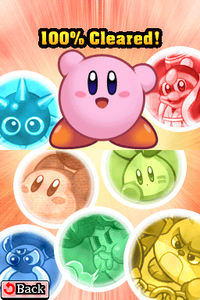 To earn 100% completion, all 186 Medals must be collected, and the Checklist must be filled in. Doing so will reward a congratulatory screen labelled "100% Cleared!" in the Game Album.

After 100%ing the game, a star can be seen next to the save file, to mark the player's achievement.

While not required for the game's acknowledgement of the 100% completion, other self-imposed conditions can include completing all of the Sub-Games.

A crowned save file.

If 100% is achieved and both The Arena and The True Arena are cleared, the save file's Kirby icon will be crowned and the Kirby Master video will be unlocked in the Theater.

Kirby gets the King Trophy in the New Challenge Stages Sub-Game.

To reach 100% completion in the New Challenge Stages Sub-Game, every stage must be completed with a Platinum rank, and the total score must be enough to earn a King Trophy.

Beating the Magolor Races with every ability could be considered an informal 100%, but it is not required to get the trophy. 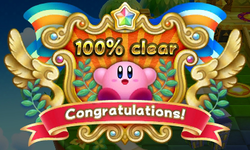 The title screen goes through subtle changes depending on the player's progress through the game. After completing Story Mode, the flowers on the Dreamstalk bloom; after completing Dededetour!, King Dedede appears flying in the background; after reaching 100% completion, Kirby appears in Hypernova form. Reaching 100% completion also rewards the player with a short Kirby Master video. 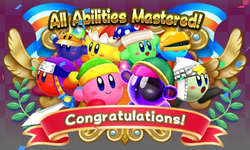 "You finished Very Hard mode using every Copy Ability! You are a Kirby Fighters master!"

To reach 100% completion, all of the Rare Outfits must be unlocked. Additionally, the game needs to be cleared on Very Hard at least once, with any ability, to unlock Shadow Kirby as a color change. Doing both of these will affect the title screen: the Copy Abilities will change to their rare variations, and Shadow Kirby will appear alongside the others. 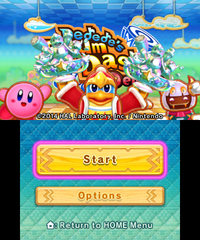 Pictured is Dedede holding up the two Platinum Trophies earned from earning a Platinum medal on each stage in Dedede's Drum Dash Deluxe.

To complete this game 100%, all 7 stages (and all 7 EX versions) must be cleared with a Platinum rank. Like with Kirby: Triple Deluxe, the title screen varies depending on the player's progress through the game, with different skits of King Dedede, Kirby, and Taranza hand puppets being shown. After reaching 100% completion, King Dedede will show off the two Platinum Trophies on the title screen, signifying the player's achievement.

A 100% save file in Kirby and the Rainbow Curse.

To complete this title 100%, the player must complete the Story Mode, clear every stage with a Gold Medal, collect every Treasure, collect all the pieces of the Secret Diary, and complete Challenge Mode with gold medals. All the Figurines will be unlocked in the process of doing the former steps.

After 100%ing the game, a Crown will appear on the Kirby icon for the respective save file. 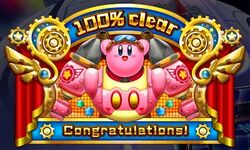 To reach 100% completion, all 100 Code Cubes must be collected, the Main Game completed, all stickers collected, Meta Knightmare Returns completed, all encounters won in Team Kirby Clash, all stages complete in Kirby 3D Rumble, and The Arena and The True Arena completed.

Reaching 100% completion rewards the player with the "Exclusive Performance Video" in the Theater, which is a full performance of The Noble Haltmann. Additionally, the UFO will also appear in the Copy Ability Testing Area, allowing Kirby to use the UFO ability without the need of scanning a Kirby amiibo. 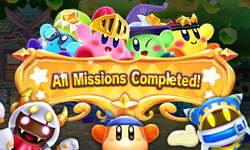 Buying 3000 Gem Apples may also be considered a requirement, but only if the player wishes to spend the money. 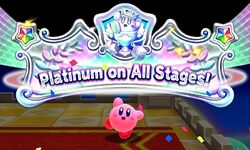 The screen awarded for Platinum on all stages.

To reach 100% completion, a Platinum trophy must be earned on all stages and the Secret Path. Doing so presents the player with a completion fanfare screen. 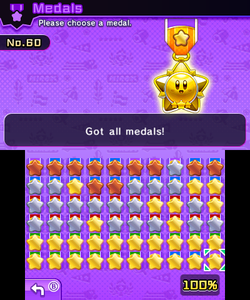 To earn 100% completion in this title, all 60 Medals must be attained. This does not require the downloadable Copy Abilities, amiibo or multiplayer (online or otherwise).

To obtain 100% completion in this title, the following must be performed:

Doing the above rewards the player with a completion fanfare image, as shown on the right.

Completion of Heroes in Another Dimension and The Ultimate Choice's 'Soul Melter EX' difficulty are not required, but rewards are still offered for their separate completion.

The following are the percentage gains toward 100% Completion for each task in Kirby Star Allies: 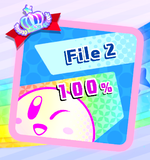 A crowned save file in Kirby Star Allies.

To make the save file's Kirby icon crowned (Version 4.0.0 is required), the following must be performed: 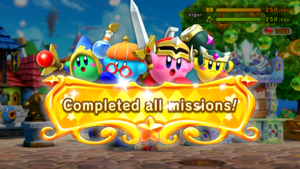 An informal 100% includes growing the Gem Apple tree to its maximum size. 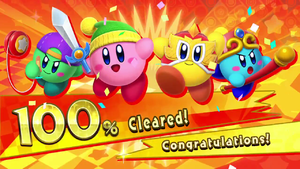 The 100% cleared screen for Kirby Fighters 2. 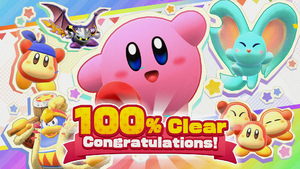 The splash screen shown for attaining 100% completion in Kirby and the Forgotten Land.

In order to attain 100% completion for Kirby and the Forgotten Land, the following tasks must be accomplished: