Togeira[Japanese title] is a rage-fueled flying spherical robotic monster which appears in the Kirby: Right Back at Ya! episode Sweet and Sour Puss. It charges its power by embedding itself inside a host and siphoning the host's feelings of anger, causing that person to become completely passive even as they are subjected to all manner of punishment. Once Togeira has siphoned enough rage, it bursts from its host and attacks using powerful explosive needle missiles.

The Japanese name of this monster is used due to it being left nameless in the 4Kids dub.

Togeira is a round robotic entity that is somewhat larger than Kirby. It is depicted as a hollow ball with angry yellow eyes and a meter indicating how full of rage it is, with the rage itself manifesting as a searing red liquid inside. On the outside, it continually emanates steam and smoke and is covered in spikes which can be launched and regrown rapidly. These needle missiles have homing properties, and can explode on impact, making Togeira very dangerous. These missiles can be inhaled by Kirby to give him the Needle Copy Ability.

Before Togeira can fight, it needs to charge up its rage. To do this, it implants itself inside a host (shrinking down in order to accomplish this) and siphons any feelings of anger the host may have, causing them to become totally passive. Once enough anger is siphoned, Togeira begins to emanate its built-up rage which momentarily causes the host to burst out in all the anger that had been built up to that point. From there, it only takes a little more anger to cause the monster to burst out of its host.

Role in Sweet and Sour Puss[edit] 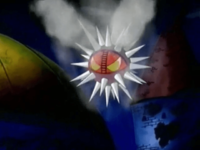 Togeira preparing to attack Kirby after emerging from King Dedede

In the episode Sweet and Sour Puss, Togeira implants itself inside of King Dedede, causing the normally outrage-prone King to become completely docile, to the point where not even the whole of Cappy Town whacking him with mallets will make him upset. As the Dream Landers continue to punish King Dedede to see if he will react or not, the rage meter on Togeira builds and builds, particularly when Dedede is made to endure Chef Kawasaki's cooking and whacked repeatedly by Escargoon and Kirby. That a monster was inside King Dedede is not learned by the other characters until it is too late, and Togeira emerges from the punished King fully charged and ready to fight.

Once free, Togeira targets Kirby and attacks him with a volley of explosive needle missiles. Kirby manages to avoid these attacks and inhales some of the missiles to gain the Needle Copy Ability. Using this ability and the Warp Star, Kirby is able to block and avoid further attacks from Togeira. Eventually, Kirby manages to trick the monster into impaling itself with its own missiles, which causes it to explode, bathing the entire sky above Castle Dedede in bright light for several moments.