Fridgy is a giant woolly mammoth-like monster which appears in the Kirby: Right Back at Ya! episode Prediction Predicament - Part I. It attacks by using its girth to slam into foes and shooting freezing bolts out of its trunk. Fridgy is called in by King Dedede to freeze Kirby so that he cannot turn into the fiery apparition in Dedede's nightmares, but is ultimately defeated by Kirby after he gains the Fire Copy Ability from Meta Knight's torch.

Fridgy is a very large bulbous creature with pale blue fur covering most of its body with green-ish accents around the base. Its top has mammoth-like characteristics, with large ears, two long tusks, and a trunk with three nostrils. Fridgy does not have limbs, but instead slithers along the ground like a snail. Fridgy has a very thick brush of hair covering the top of its head which obscure its eyes (assuming it has any).

Fridgy's main power is the ability to shoot freezing globs out of its trunk which can very quickly coat its targets in ice. When threatened, it can also create a continuous stream of ice from its trunk. Notably, Fridgy's ice blasts cannot be inhaled. Fridgy can also crash through walls and jump in the air to attack using its girth. Fridgy is very weak to fire, and will melt into water if set alight for long enough. 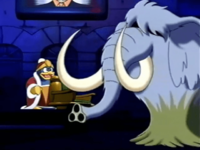 Fridgy sets off after Kirby after being called into Castle Dedede.

Fridgy appears in Prediction Predicament - Part I, where it is called into Dream Land by King Dedede to dispose of Kirby after becoming paranoid that Kirby will turn into a giant infernal monster and attack him. Fridgy proves to be a dangerous monster as Kirby finds himself unable to directly counter any of its attacks and is chilled and buried in ice by it. Kirby is forced to run from Fridgy until Meta Knight steps in and tosses Kirby a torch so he can gain the Fire Copy Ability. Using this ability, Kirby is then able to quickly subdue Fridgy by setting it ablaze, which causes it to melt into water.