Bell is a Copy Ability which gives Kirby a large bell hat with a pink star on the front and blue ribbon tied to the handle, with two additional handbells to use as weapons. The Bell ability is primarily used to create large damaging sound waves and pounding foes in rapid succession, but the bells themselves can also be thrown to deal damage from afar. Additionally, Kirby can hide inside his bell hat for a more effective guard, which will retaliate against attackers when struck. The Bell ability is among those which can be used underwater. Bell's sole provider is the elusive bell enemy Ringle, who can only be occasionally found floating in the air or walking along the ground.

Bell debuts in this game and is obtainable from the enemy Ringle. Bell is a fairly versatile ability for combat; it allows Kirby to attack from a distance, use a more powerful Guard technique, and attack underwater with it. Kirby also appears to be enjoying himself while he bangs on the bells to create huge sound waves, as a smile can be seen on his face during some of the attacks. However, Bell is one of the less versatile abilities for puzzle-solving, having no elemental attacks or special objects to interact with.

Bell appears as a selectable copy ability in this game, but it cannot be used unless the player has save data for Kirby: Triple Deluxe on the same Nintendo 3DS system. It functions the same as it did in the previous game.

Bell returns as a playable ability in this game, with largely the same move-set as it had in its previous iterations (excepting the underwater moves, as there is no water in the game). It is unlocked upon reaching Fighters Rank 37, making it the final Copy Ability to unlock in the game.

In Kirby's Dream Buffet, Bell Kirby appears on a Character Treat, using his art from Kirby: Triple Deluxe. Bell does not appear as an ability in the game proper. 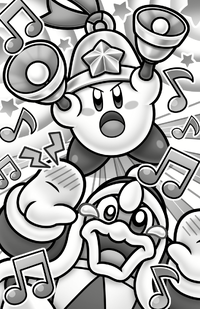 Bell Kirby brings down King Dedede in Kirby and the Big Panic in Gloomy Woods!

In the Kirby novel series, the Bell ability appears in Kirby and the Big Panic in Gloomy Woods!, where Kirby obtains it from Ringle. Unlike previous Copy Abilities in the series, Kirby uses multiple skills from its moveset, such as Tinker Melody and Bell Block.

In Kirby and the Big Panic in Gloomy Woods!, Kirby stumbles upon large, mysterious ruins, and rushes there to take a rest from collecting the Stardust Fruits with Meta Knight, Waddle Dee, Kerota, Keroji, and Kerolina. They warn him to avoid the place as a loud bell sounds from it, but Kirby ignores them. Ringle angrily jumps out at him, but is inhaled quickly. Kirby gets the Bell ability, and uses it to make lots of noise, much to his delight. Broom Hatter then enters the scene, and realizes what Kirby did to Ringle. He rushes at Kirby, but Meta Knight quickly assures him that Ringle is unharmed. Broom Hatter explains that he and Ringle have the job of guarding the precious Stardust Crystal, as he guides the group into the ruins. After Broom Hatter explains all this, the group runs into King Dedede and the Woodkeeper. Dedede immediately assumes everyone is after the crystal, and turns against them. As the chaos increases, Kerota, Keroji, and Kerolina attempt to sneak away with the Stardust Fruits, as they had planned all along. Kirby quickly notices this, angrily shakes his bells, and directly hits them with an extra loud tone. Kirby gets confused at their reaction, and Broom Hatter tells him that Ringle's bell can also be weaponized. Kirby then uses his bells against King Dedede, and blows him away. Dedede doesn't give up, and slams his fists down at Kirby. Kirby retreats into his bell for protection, and Dedede strikes the bell. The king's hands swell up with immense pain from this. Kirby deals the final blow with a Quick Finale. After Kirby's triumph, he looks around to see that everyone is knocked out from all the bell sounds, except Broom Hatter, who is used to it. At Broom Hatter's request, Kirby drops his Bell ability, releasing Ringle. The group settles everything, until they notice that the Stardust Crystal and Woodkeeper are missing. Kirby, Dedede, and Meta Knight then leave the ruins to recover the stolen crystal.