This article is about the character from Kirby's Dream Land 3. For a similar character who appears in other games and might possibly be Ado herself, see Adeleine.

Ado is the boss of the Cloudy Park level from Kirby's Dream Land 3. She is a human girl who came to Pop Star in order to practice painting.[1] Ado bears a strong resemblance to Adeleine, both in looks and mannerisms, but whether or not they are the same character is currently ambiguous.

After Ado runs out of paintings to send toward Kirby, she gets fed up and charges at him with her paintbrush. She can only take a single hit, and even a Slide or Air Bullet will do her in. Ado will also be taken out even if she manages to hit Kirby. When defeated, she tumbles off to the right.

Doodle of Ado from the True Ending credits roll.

After Kirby uses the Heart Stars to purge the area of Dark Matter's influence, he can come back to see Ado, who will be much friendlier. She will paint a number of different things at random, then erase them. These paintings include:

While not mentioned by name in Kirby: Triple Deluxe, Ado is depicted in two keychains: "Sweet Stuff Drawing" and "Boss Butch" (which depicts her along with the rest of the regular Dream Land 3 bosses). 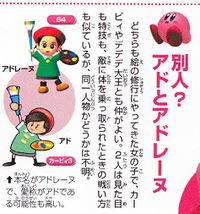 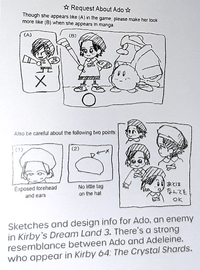 After the release of Kirby 64: The Crystal Shards for the Nintendo 64, there was much debate about Ado's relationship to Adeleine, a similar character who appears in said game, with pre-release material suggesting they were likely meant to be the same character during a point in development. In Japanese, Adeleine is spelled "Adorēnu" (アドレーヌ), so "Ado" can be interpreted as simply a shortened version of her full name. The book 20th Anniversary Kirby Pupupu Encyclopedia, published by Shogakukan in 2012, addresses the many similarities of the characters, and suggests that Ado could be a nickname for Adeleine, but ultimately states that it is simply unknown if they are the same person or not.[2]

A similar artbook published by Kadokawa in 2017, Kirby Art & Style Collection, also includes a piece of concept art that appears to have been sent to manga artists after Kirby's Dream Land 3's release. In the artwork, two designs for Ado are shown—one resembling her in-game sprite, and another resembling Adeleine—and guidelines are shown to indicate that artists should draw her in the latter design rather than the former.[2] Because of this, many manga appearances of Ado resemble Adeleine, and some interpreted the two as a singular character after Kirby 64 was released. Early concept art for Kirby 64 also shows Adeleine resembling this design, with a cross-shaped button on her smock rather than a circular one. However, a caption below the artwork states that it only concerns Ado, and notes that "there's a strong resemblance between Ado and Adeleine", gelling with the earlier statement in the Pupupu Encyclopedia.[3] A different book published by Kadokawa in 2019, the Kirby Illustrated Character Encyclopedia, contains a similar statement about Ado and Adeleine as the Pupupu Encyclopedia, while the Kirby Character Encyclopedia released by Kadokawa in 2022 lists Ado and Adeleine separately.

A tidbit worth noting is that both characters are shown in supplementary material to call other characters by the same nicknames, such as "Kir-kun" for Kirby and "Dede no Dan'na" ("Mr. Dede") for King Dedede.[3]

While recent Japanese media has described them as separate characters that only might possibly be the same, both Nintendo of Europe and Nintendo of Russia have stated that Adeleine appeared in Kirby's Dream Land 3, via the descriptions of their YouTube videos featuring the trailer for Adeleine & Ribbon's appearance in Kirby Star Allies. Specifically, it seems that all of these were translated from the English UK version of the video. However, this detail is notably absent on both the respective Nintendo of America and Nintendo of Japan equivalents. Additionally, in Star Allies, Adeleine has a move known as Ado's Painter ("Ado Painter" in Japanese), allowing her to paint the same bosses as Ado could in Kirby's Dream Land 3. This can either be seen as evidence supporting the two as the same character, or it could simply be referencing Ado while retaining her as a distinct character. Another indirect nod to Ado comes from the CPU nickname "Ado-Chan" in Kirby's Dream Buffet; the same game features Adeleine as a costume, suggesting the nickname to be a deliberate reference.

Within Nintendo 3DS eShop and Nintendo Switch titles, internal designations may provide an inside clue as to how the character is at least treated among developers. In Kirby Fighters Deluxe, Dedede's Drum Dash Deluxe, Team Kirby Clash Deluxe, and Kirby's Blowout Blast, a recurring remix of Adeleine's introduction cutscene from Kirby 64 contains the string N64_Ado; furthermore, Adeleine's texture files from Kirby Star Allies DLC and Super Kirby Clash are denoted as Ado, despite the model folder itself being named Adeleine. In the case of Star Allies, the fact that other Dream Friends do not use shorthand makes the usage of Ado for Adeleine seem particularly deliberate, and it is important to note that the vast majority of modern filenames adhere to official transliterations over literal romanizations. Additionally, Japanese Twitter posts by HAL consistently do not mention Ado in text or depict her in artwork; for example, in Adeleine's Dedede Directory post in 2020, King Dedede's introductory statement translates to "It's 'Adeleine', with her trademark red beret!", and does not otherwise allude to Ado or Kirby's Dream Land 3. Furthermore, Ado is the only Kirby's Dream Land 3 boss that did not get a Dedede Directory post. 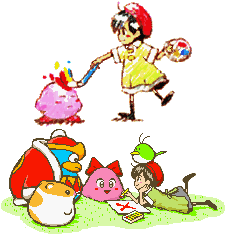 Various pieces of in-game artwork featuring Ado. Note how her design differs from her official artwork.