Dark Matter is one of the primary antagonists of the Kirby series, making major appearances in two games to date, namely Kirby's Dream Land 2 and Kirby's Dream Land 3. It also makes a minor appearance as the final boss of Kirby Quest, a Sub-Game of Kirby Mass Attack. This Dark Matter appears to be a single high-ranking member of a greater species, but it still defers to its master, Zero.

Dark Matter has two primary forms; one such form is that of Dark Matter Blade, which gives him a somewhat humanoid appearance with spiky hair, armor, and a cape, as well as a visor with a single eye. Its most common form is that of a shadowy sphere encircled by small orange or purple balls, and sporting a single eye (referred to as Real Dark Matter in Japanese).

It is capable of possessing other life forms and making them bend to its will, an ability that it frequently takes advantage of to possess Kirby's friends and rivals (notably King Dedede), often forcing them to fight him. While being possessed by Dark Matter, some creatures obtain enhanced and sometimes bizarre abilities. It can also control dark clouds that serve the same purpose on a larger scale, doing so in Kirby's Dream Land 3.

Dark Matter also shows up in Chapter 4 of Kirby Quest from Kirby Mass Attack. It's the final enemy encountered in this Sub-Game. Its appearance is similar to that of its Kirby's Dream Land 2 incarnation, but is bigger and has orange balls as opposed to purple.

Dark Matter (referred to here as !? in the game's False Ending) debuted in Kirby's Dream Land 2. Here, it tried to take over Dream Land by breaking the rainbow bridges between the Rainbow Islands and possessing some of its citizens. It can only be fought in this game if Kirby has collected all Rainbow Drops. Otherwise, defeating King Dedede will end the game and lead to the False Ending.

According to an unofficial Japanese player's guide published by Keibunsha, Dark Matter is lonely, and targeted Dream Land out of jealousy:

This guide is not officially published by Nintendo, so it is not necessarily considered canon. However, the January 2019 issue of Nintendo DREAM affirms that, at least in-house, the HAL Laboratory developers considered this to be Dark Matter's backstory.[2] 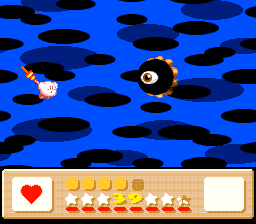 Facing off against Dark Matter in Hyper Zone, in Kirby's Dream Land 3.

After being defeated in Kirby's Dream Land 2, Dark Matter once again tries to take over Dream Land alongside Zero, this time using a dark cloud. The official Japanese guide confirms that this Dark Matter is the same entity from the previous game.[3] It can only be fought in this game if Kirby has collected all Heart Stars. After being defeated, the people possessed celebrate together. Otherwise, defeating King Dedede will end the game and lead to the False Ending.

Dark Matter is faced as the first opponent in Hyper Zone. It fights similarly to its second form in Kirby's Dream Land 2, using dark lasers and projectiles consisting of its orange orbs to attack. After being defeated, Zero appears immediately after as the true final boss of the game.

While Dark Matter does not directly appear in this title, instead being replaced by the Dark Matter cloud, its "Real Dark Matter" form appears as a painting that Adeleine creates during her boss fight.

In Kirby: Canvas Curse, Dark Matter appears as a painting in Paint Panic.

Additionally, Dark Matter was originally set to appear as a ball character, along with other bosses from previous games, like Lololo & Lalala, Zero, and Nightmare's Power Orb. However, the idea was scrapped, and it doesn't appear in the final game.[4]

Dark Matter is the Final Boss of Kirby Quest, being fought in Chapter 4, Stage 40.

Dark Matter makes a cameo in Team Kirby Clash Deluxe and in Super Kirby Clash, where a set of Swordsman Dark Matter-themed weapon (Dark Matter Blade) and armor (Dark Matter Gear) for Sword Hero is sold in Magolor's Shoppe. The sword is covered with purple aura, the armor resembles the appearance of the dark swordsman (complete with flowing "hair" and a living single eye), and the shield resembles its true form.

In Super Kirby Clash, Dark Matter also appears as a sticker, represented in his swordsman form.

In Super Smash Bros. Ultimate, Dark Matter appears as a ★★★★ primary spirit in its Blade form. Its type is attack, and it possesses 3 support slots. It has level 1 stats of 2,159 attack and 1,876 defense, along with 5,398 attack and 4,691 defense when leveled up to level 99. It can be obtained either by battling it in World of Light, battling it in the Spirit Board, or purchasing it from the Shop.

While not appearing in the anime itself, Dark Matter makes a brief appearance in the Kirby of the Stars Pilot as one of the enemies which Kirby must battle, taking on its appearance from Kirby's Dream Land 3. It is quickly dispatched using the Ice ability.

There are many other creatures and objects which are either similar to or directly related to Dark Matter. They are as follows:

In Japanese, these entities belong to a group called the Dark Matter Clan (ダークマター族).

These entities do not belong to the Dark Matter Clan, but are confirmed to be related to Dark Matter: