This article is about the monster in Kirby: Right Back at Ya!. For the enemy in the games, see Whippy.

Whippy is an evil clown monster who appears in the Kirby: Right Back at Ya! episode Cowardly Creature. He is the ringleader of the "Young Monsters of the Future" monster training school, and is sent by Night Mare Enterprises to subdue and take over the escaped monster Phan Phan. Whippy then sends Phan Phan after Kirby and attacks him, but Kirby counters by gaining the Throw Copy Ability and using it to capture Whippy and toss him into outer space.

Whippy is a small clown monster who dresses in a white and green striped outfit, has green hair and a green clown nose, and wears a small red party hat. Whippy does not appear to have eyes - with only red cross-shaped make-up where his eyes should be - and he has sharp teeth beneath his red clown lips. His hands are disembodied, with no arms to connect them.

Whippy first subdues Phan Phan by reeling it in with his whip, and then using an electric shock to turn the elephant hostile. From there, he attacks Kirby by riding on Phan Phan and tossing spiky balls for Phan Phan to throw at Kirby. Whippy is an expert juggler, able to juggle all manner of objects including knives, and also attacks directly using his whip. Whippy is susceptible to being grabbed and tossed by Throw Kirby due to his small size. 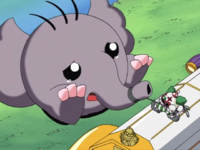 Whippy is first shown in Cowardly Creature as the ringleader of the "Young Monsters of the Future" program run by Night Mare Enterprises, but is not formally introduced until he is sent through the Monster Delivery System to apprehend and control Phan Phan. Once he has control of the elephant, he sends it after Kirby, under the idea that Kirby would not be willing to fight his new friend. Whippy appears to be winning this battle at first, but Kirby eventually inhales one of Whippy's spike balls and gains the Throw Copy Ability. He then uses this ability to grab Whippy from atop Phan Phan and toss him around, before finishing him off by throwing him out into space and into a black hole.