Morpho Knight, titled Reborn Butterfly and Fluttering Dream Eater, is a surprise boss who debuts in Kirby Star Allies, at the end of Guest Star ???? Star Allies Go!. It is a butterfly of paradise[1] from another dimension[2] which transforms into a masked sword wielder as a result of feasting upon the soul of a powerful being. In Guest Star The Three Mage-Sisters and The Ultimate Choice's Soul Melter EX difficulty, a stronger form called Morpho Knight EX (titled Dark-Winged Disaster) is fought instead. It also makes a secondary appearance as the final boss of the isolated isles of Forgo Dreams in Kirby and the Forgotten Land after the butterfly casts judgment on Soul Forgo.

Morpho Knight is an enigmatic character. Little is known about its motives, other than its desire to "judge" powerful entities, absorbing their souls in the process. The same can be said about its personality (if it even has any), though it is commonly referred to as a "fluttering fiend". Morpho Knight is primarily associated with death, rebirth, and the underworld — its design and flavor text reference many cultures' concepts of life after death, such as Ragnarök, Sukhavati, Hades, and the phoenix, among many others. It utilizes fire as its element of choice in combat.

Before absorbing any entity, Morpho Knight displays the same body as various red and orange butterflies seen across the series. In this form, it is rather small, with its wings being yellow-orange on their insides and red on their edges, though whether the wings smoothly fade from red to orange or have a hard separation between them varies. Its body is mainly orange. It also emits glowing fire sparks - a unique trait not shared with other red and orange butterflies.

After transforming, Morpho Knight gets a Kirby-like body shape, similarly to Galacta Knight and Meta Knight, but its body is completely black with white eyes and pauldrons, and yellow gloves and boots. Despite having gloves and shoulder pads, it has no visible arms in Kirby Star Allies, similar to Sir Kibble and Blade Knight; however, it has arms in Kirby and the Forgotten Land. Its red mask and wings have a butterfly motif to them. It also carries a serrated red sword, which it can split in two or enlarge when necessary. Morpho Knight's sword in Kirby Star Allies combines the motifs of butterfly wings (the guard, with an eye on it) and the phoenix (the blade, which looks like a bird feather). Several of its unused designs have the guard part featuring the Master Crown.[3] The eye in Morpho Knight's blade bears a striking resemblance to the eyes on Void Termina that the Star Allies Sparkler needs to hit in order to damage Void Termina. Instead of the eye being red, however, it is blue. Likewise, Morpho Knight EX's blade has a red eye in the middle, possibly being the exact texture of the eyes on Void Termina.

Morpho Knight's Japanese name is バルフレイナイト (Barufurei Naito). Barufurei is a corruption of the English word "butterfly" (バタフライ, batafurai).[4] Baru appears to be derived from the loanword "valkyrie" (バルキリー, barukirī), referring to the Norse deities who choose warriors to ascend to the afterlife in preparation for Ragnarök (the "day of judgment"). Relating to this, the furei may be derived from the Japanese name for the Norse goddess and leader of the valkyries, Freyja (フレイヤ, Fureiya); "Valfreyja" (ヴァルフレイヤ, Varufureiya) is an obscure alternate name for the goddess. Naito is the English word "knight". 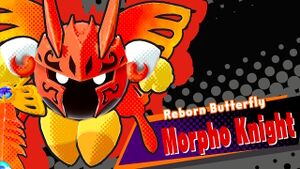 Morpho Knight debuts in Kirby Star Allies. It is primarily faced at the end of Guest Star ???? Star Allies Go!, where it absorbs Galacta Knight and uses his power to transform into a knight of doom.

Morpho Knight's Japanese pause screen description is slightly different: rather than describing it as "a pure being twisted by a dark past," it is described as "an unknown entity, never meant to be fought, lost in the darkness of history." This may be a reference to its planned appearance in the canceled Kirby for Nintendo GameCube. This is also the case in the Korean and Chinese versions.[5][6]

Morpho Knight EX's pause screen description is much more elaborate in the Japanese version. It is explained that the power it received from Galacta Knight has grown and fully become its own. This is also the case in the Korean and Chinese versions.[7][8]

Similar to the Meta Knight boss battle in Star Allies, Morpho Knight's sword-based attacks can be interrupted by the Sword ability (including Friends like Blade Knight, Meta Knight, and Dark Meta Knight), which creates a sword clashing effect and stuns it for a while, enabling its other opponents to strike its vulnerable backside.

When its Health falls below 60%, Morpho Knight enters its second phase, taking 1/5 damage during phase shifting. Now, the boss can split its sword in two, and use a wider variety of upscaled attacks which cover a large portion of the screen. It can also hypnotize Friends with sound waves, turning them against Kirby and other allies, though their heroic personality is recoverable. This form of attack is shared with Void Termina's Final Core (Phase 4) and Void Soul.

When Morpho Knight is defeated, it gracefully disintegrates into a cloud of red butterflies and vanishes. 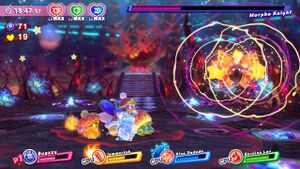 A still from the battle with Morpho Knight.

The following lists all of Morpho Knight's attacks. Attack names are conjectural unless otherwise noted. Attacks in red are used during the second phase only.

Unlike most other bosses in the game, Morpho Knight doesn't attack in a set order every time it's fought. Specific attacks will always be performed at set intervals while all the others are performed randomly.

These attacks are always performed randomly:

For phase 1, Morpho Knight attacks in a fixed order on loop as follows:

Upon entering phase 2, Morpho Knight attacks in a fixed order on loop as follows:

One of the strongest gear sets for Sword Hero (called the Morpho Gear) is available for purchase in Magolor's Shoppe. This gear gives Sword Hero Kirby a replica of Morpho Knight's helmet and sword. 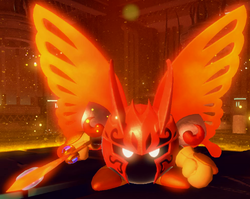 Close-up of Morpho Knight from Kirby and the Forgotten Land

Morpho Knight returns in Kirby and the Forgotten Land, as a surprise final boss in the isolated isles of Forgo Dreams. Similar to Kirby Star Allies and just like with Galacta Knight, it first appears fluttering at Soul Forgo and making contact with it, absorbing its power and bringing forth the scarlet-clad knight.

Its flavor text is more accurate to the Japanese, Chinese and Korean versions than Kirby Star Allies, and all refer back to the pause screen description for Morpho Knight EX, which describes how it may land in "a dream world".

Interestingly, it uses the term "一頭の夢見鳥", which translates as "a butterfly" or "one of the butterflies". It also describes this butterfly arriving "as if lured". The English localization translates this as "drawn toward".

The figure description for Chaos Elfilis states that this final boss of the Colosseum was created from the fusion of Fecto Forgo and Morpho Knight.

The very last Evolved Copy Ability, Morpho Knight Sword, is based off its armor and blade. 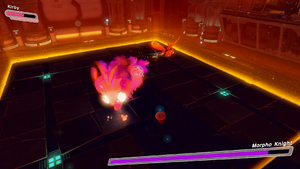 The following lists all of Morpho Knight's attacks (attack names are from the Kirby and the Forgotten Land Perfect Support Guide). Attacks in red are used during the second phase only.

Much like in Kirby Star Allies, Morpho Knight doesn't attack in a set order every time it's fought. Specific attacks will always be performed at set intervals while all the others are performed randomly.

For phase 1, Morpho Knight attacks in a fixed order on loop as follows:

Upon entering phase 2, Morpho Knight attacks in a fixed order on loop as follows:

Morpho Knight does not appear directly in Kirby's Dream Buffet. However, Kirby can take on its appearance using a costume and a color based on it. They can be unlocked upon reaching a Gourmet Rank of 99 and 100, respectively. 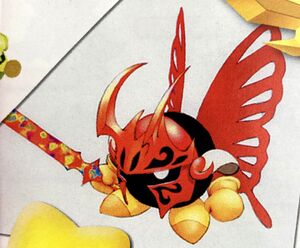 Morpho Knight's concept art for Kirby for Nintendo GameCube. Note that the sword differs in design compared to the final version.

It is a common misconception among the Kirby fandom that Morpho Knight is based off Meta Knight's early design — this is not true. Morpho Knight was originally a boss for the canceled title Kirby for Nintendo GameCube.[4] Its concept art can be found on Meta Knight's page in the booklet from Kirby's Dream Collection Special Edition, which might be the source of this misinformation (though from where the "early design" part came from is unknown). Given this connection to Meta Knight, Morpho Knight's English name can be seen as a pun, as both names fit into the word "meta-morpho-sis" and follow each other. In its original design for Kirby for Nintendo GameCube, Morpho Knight wields a straight sword, which was changed to a serrated sword in its final design.

Morpho Knight was brought back as a surprise boss for Kirby Star Allies. Series director Shinya Kumazaki didn't want to take the easy way out and have Galacta Knight as the secret boss again, as he thought that it would no longer be a surprise to players. Morpho Knight was given a butterfly form to enter the battlefield, to contrast butterflies normally being seen as "a symbol of peace" during the happy, peaceful endings of Kirby games. In addition, it is also a reference to ancient Japanese mythology, where butterflies symbolized life after death.[4]

In Kirby Star Allies, Morpho Knight is unique in that its battle music can change depending on its opponent.