This article is about the stage in Kirby's Dream Land and Spring Breeze. For other uses of "Green Greens" and similar things, see Green Greens (disambiguation).

Green Greens is the first stage in Kirby's Dream Land, and the first in the Kirby series. It also appears in the first stage of Spring Breeze in Kirby Super Star and Kirby Super Star Ultra. As its name implies, the stage takes place in a region of Dream Land dominated by green plants, with relatively simple terrain and basic enemies. This stage features a mid-boss encounter with Poppy Bros. Sr., and the boss of this area is Whispy Woods, appearing in his most basic form.

Green Greens is the prototypical "grass and forest" stage that has become standard for the first stages/levels of most Kirby games, and has been referenced several times in subsequent games and media (with the most common example being reusing or adapting the stage music).

In all three versions of the stage, Green Greens begins with a cutscene where Kirby is chasing some butterflies, but then the wind sends both Kirby and the butterflies tumbling away. This scene ties in to the name "Spring Breeze", and the general statement of Kirby's origin ("blew into Dream Land one day on a spring breeze").

Green Greens is the first stage of Kirby's Dream Land, and introduces numerous mechanics, enemies, items, and aesthetics that would be reused over and over again throughout the Kirby series. The music of this stage has also become iconic, to the point where it features in some capacity in nearly every game in the series.

The stage itself is characterized with a natural feel, with grasslands, forests, and hollow trees. Poppy Bros. Sr. makes his first appearance here as a mid-boss, and Whispy Woods likewise debuts here as the stage boss.

Kirby approaching the iconic "IN" door in the first section

Green Greens consists of five distinct areas (referred to technically as "rooms"), with one of these rooms being an optional side area, and one being the boss area where Whispy Woods is battled.

After the cutscene plays, Kirby is dropped at the left end of the first area, which is a long and mostly flat walk through a grassy plain with tall round hills in the background and popsicle-stick-shaped stumps popping out of the ground in places. As Kirby makes his way to the right, he will need to deal with a number of enemies using his inhale or air bullets, with most of the enemies being Waddle Dees and Bront Burts. He will also need to take to the sky at least once to get over a tall barrier on his path. The latter half of this area features a round-trip door with "IN" written over it that will take Kirby to the aforementioned optional side area and give him access to some Pep Brews. From here, after hopping over a bottomless pit, Kirby can grab onto a Warp Star at the end of the path and use it to fly into a forest in the background.

The second main room starts with Kirby landing in a flat area where he has to battle Poppy Bros. Sr. before proceeding. The path from here is mostly flat, and requires Kirby to deal with enemies such as Cappy, Poppy Bros. Jr. and Grizzo before reaching a doorway leading into a big hollow tree.

The third main room, inside a hollow tree trunk, tasks Kirby with jumping up through the tree by going though thin floors. A number of enemies will attempt to get in the way here, so a measure of timing is needed to get by unscathed. Further up, Kirby will need to use his hover again to reach the door at the top.

In the last room, Kirby needs to drop down from some wooden decks to reach a flat area where Whispy Woods sits to the right. Kirby must battle this stationary obstacle and defeat him in order to obtain the first sparkling star and finish the stage with a dance.

In Kirby Super Star and its remake, Kirby Super Star Ultra, Green Greens appears as the first stage of Spring Breeze, which is a remake of Kirby's Dream Land. The basic layout of Green Greens remains the same, but it is a little bit shorter and contains enemies that could not be found in the original version.

Like with Kirby's Dream Land, the Spring Breeze version of Green Greens consists of five rooms and has the same basic structure, but the rooms themselves are for the most part shorter or otherwise changed. The main differences are as follows:

The following are direct references to Green Greens in later Kirby games:

The sixth stage of Rainbow Resort is a shortened homage to Kirby's Dream Land, with its first couple rooms being based on Green Greens in particular.

In addition to the stage itself being in Spring Breeze, the first stage of Revenge of the King - Purple Plants - is based on Green Greens, though it has been made longer and more difficult.

A portion of the unfurled tapestry from Lollipop Land, which depicts Green Greens.

In the second stage of Lollipop Land, a tapestry can be found that - when unfurled - depicts the Green Greens stage from Kirby's Dream Land in its original monochrome sprite-based look.

The first level of Kirby's Blowout Blast is inspired by Green Greens, and uses the same stage music, though it instead features Lololo as the boss.

The last area of Extra Planet δ is an homage to Green Greens, taking its basic aesthetic, layout, and music, and also mimicking the monochrome look.

When playing Guest Star ???? Star Allies Go! as Marx, the first level features a recreation of the first room of the Spring Breeze version of Green Greens from Kirby Super Star. 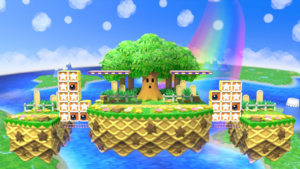 Green Greens, as it appears in Super Smash Bros. Ultimate.

Green Greens appears as Kirby's main stage in Super Smash Bros. Melee. Whispy Woods appears at the center of the stage, and may blow either left or right at any time, blowing characters in that direction. He also occasionally drops apples, which may be used as a projectile or eaten to recover health. The level consists of two thin platforms, floating in midair above the main ground platform. There are two shorter platforms floating left and right of the main platform, and Star Blocks and Bomb Blocks fall into the gaps between these platforms. The stage reappears as an unlockable stage in Super Smash Bros. Brawl. It is unchanged from its appearance in Melee. The stage can be unlocked by playing 20 Vs. matches against Kirby.

This stage appears again in higher fidelity in Super Smash Bros. Ultimate. Here, it has a 'Battlefield' and 'Omega' form, and stage hazards such as the falling blocks and Whispy's gale can be disabled.

Despite the stage itself only appearing in two original games, its theme song has been reused in almost every game since and is the second most recurring track in the series, being beaten out only by King Dedede's Theme. It's considered the main theme of the Kirby series and has been mostly unchanged since its debut. However, since Kirby Super Star, the theme is sometimes extended much like Dedede's, now incorporating parts of Kirby's Triumphant Return.

Nature's Trail of Badness
A great place to start your journey, this natural setting is full of rolling hills, fleecy clouds, and bushy trees. But don't let the scenery distract you because while the animals may look cute and friendly, they can be very troublesome and dangerous.