Sirica is a young space-faring warrior who appears in Kirby: Right Back at Ya!, making her primary appearance in Crusade for the Blade. She is the daughter of the deceased Star Warrior Garlude, and initially comes to Dream Land on a mistaken quest to avenge her by recovering the sword Galaxia from Meta Knight, who she believes betrayed Garlude to obtain it. After attempting to claim the Galaxia, she learns the truth from it, and hands the sword to Kirby in order for him to defeat the monster Kirisakin.

Sirica is a white-skinned alien-girl with long white hair and light violet eyes, and peach colored blushes. She wears a leaf green bandanna around her head that is tied into a bow in the back. Her clothing consists of an orange suit, a long pale green collar, with a brass colored line down the middle of it, and a hole in the back of it, it goes from her neck to both of her shoulders. Her gloves and shoes are brown, each with two brass-like pieces attached to them. She wields a copper-red and gray weapon/tool that has a small green screen on it, the end of the handle bears the logo of Night Mare Enterprises. It is also able to transform into any of the following: A flamethrower, a grappling hook, a bazooka, a machine gun, and a sword.

Sirica initially appears to be driven solely by vengeance and rage, and senselessly attacks anyone who gets in the way of her and Meta Knight and his sword. This behavior is driven by a desire to avenge her mother Garlude, who she initially believes was betrayed and left to die by Meta Knight. After attempting to claim the sword, she is told the truth of what happened, and has a change of heart, nearly sacrificing her own life so she can toss the Galaxia to Kirby. After the monster Kirisakin is slain, Sirica is finally able to make peace with the past, as the monster responsible for her mother's death is no more.

Role in Crusade for the Blade[edit] 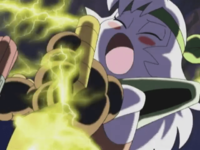 Sirica being shocked after attempting to claim the Galaxia in Crusade for the Blade.

Main article: Crusade for the Blade

In Crusade for the Blade, Sirica lands in Dream Land using her space ship in order to hunt down Meta Knight and reclaim his sword Galaxia. After terrorizing King Dedede and the other Castle Dedede residents, she finds Meta Knight and wounds him, though she is fought off by Sword Knight and Blade Knight. After Meta Knight and his friends flee to Kabu Canyon to tend to their mentor's wounds, Sirica finds them again and attempts to claim the Galaxia, but the sword rejects her. At that moment, the monster Kirisakin which was called in by King Dedede finds them as well and attacks. After failing to subdue the monster, Sirica grabs Galaxia again and is informed of the true story of her mother's death by the sword. She tosses Galaxia to Kirby who uses it to defeat Kirisakin and avenge Sirica's mother. With this done, Sirica leaves Dream Land in peace.

Sirica makes only two more small appearances in the anime after Crusade for the Blade, in the episodes Combat Kirby and Fright to the Finish. She appears on the Halberd's main screen alongside Knuckle Joe and Sir Arthur and his men and informs Meta Knight that she has joined in their battle to finally topple Night Mare Enterprises. She does this by commandeering a Destroya and helping to fight the other ships off.