Trash Basher is an anthropomorphic garbage can monster which appears in the Kirby: Right Back at Ya! episode A Trashy Tale. It is sent by Night Mare Enterprises to spew garbage in Dream Land in retaliation for King Dedede sending his trash through the Monster Delivery System earlier in the episode. Trash Basher is later defeated by Cleaning Kirby, who then proceeds to clean up the garbage it spewed in and around Cappy Town, though leaving much of the garbage in Castle Dedede for the King to deal with.

Trash Basher is a large creature shaped like a metal garbage can with arms and legs and gloves and shoes. Trash Basher has two dour red eyes positioned on its "lid", with the opening into the can acting as its mouth. On the rim of its lid, Trash Basher has two small tufts of hair which form a spiky mustache. Trash Basher attacks by spewing garbage from its mouth which it can lob great distances. Although Trash Basher can hold a lot more garbage than would intuitively fit in its body, its trash is not infinite, as it eventually runs out while fighting Cleaning Kirby.

Role in A Trashy Tale[edit] 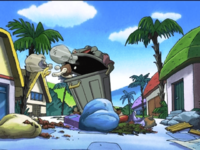 Trash Basher appears in the episode A Trashy Tale, where it is sent to Dream Land free of charge by Night Mare Enterprises in order to get revenge on King Dedede by spewing trash everywhere. After mucking up the castle, Trash Basher makes its way to Cappy Town and starts turning it into a dump. To stop it, King Dedede kicks Kirby in to deal with the monster, but Kirby finds himself unwilling to inhale the creature or its garbage and runs for it. Eventually, Kirby is cornered by Trash Basher, but Meta Knight steps in and tosses Kirby a broom so he can gain the Cleaning Copy Ability. Using this ability, Kirby makes quick work of Trash Basher after forcing it to exhaust its trash, and then batting the monster away, where it is destroyed in a magical sanitary explosion.