Dark Matter Clone is a surprise Boss encountered near the end of Meta Knightmare Returns in Kirby: Planet Robobot. It is not the real Dark Matter, but fights much like its incarnation in Kirby's Dream Land 2.

After defeating President Haltmann 2.0, Meta Knight, presuming his work finished, makes a triumphant pose. Then, the supercomputer Star Dream activates behind him. The computer proclaims Meta Knight to be the new admin, and as such, vets him through a special credential process dubbed "Sword_Master.EXE", where he must prove his worth as a swordfighter. The first challenge Star Dream sends is the clone of Dark Matter in his Swordsman form. 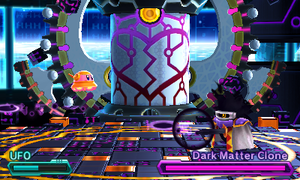 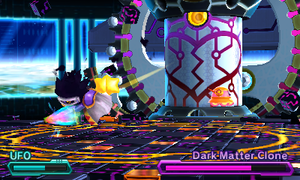 The following lists all of Dark Matter Clone's attacks in Kirby: Planet Robobot.

For phase 1, the Dark Matter Clone attacks in a fixed order on loop as follows:

When Dark Matter Clone is reduced to half health, it pauses for a brief moment, regains composure, and a single large eye appears on its torso, resembling Dark Matter's characteristic eye. 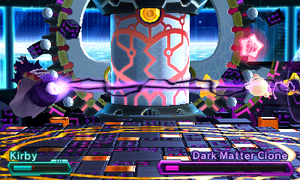 For phase 2, the clone starts with these attacks:

Afterwards, the Dark Matter Clone attacks in this order on loop:

Once Dark Matter Clone is defeated, it dissolves back into the purple goo from whence it was formed, collapsing tumultuously in on itself before exploding.

Dark Matter Clone's theme is titled Reproduction of Darkness (暗黒の復刻 in Japanese). It's an arrangement utilizing Dark Matter's themes of both forms from Kirby's Dream Land 2.