This article is about the enemy. For the Copy Ability, see UFO.

UFO is a sleek silver flying saucer-shaped enemy known for his erratic flight patterns and relative rarity. This enemy typically lurks in hidden rooms throughout the Kirby series, and often only appears once in the stage, not reappearing like other enemies tend to. UFO's usual attack strategy is to rapidly fly in from a distance and then hold position in the air for a brief moment before flying off again. He may also fire lasers, similar to the Laser Ball. Once ingested, he gives Kirby the UFO Copy Ability, which allows the pink puffball to shoot lasers or a beam at his foes.

In the Goal Games of Kirby's Return to Dream Land, Kirby: Triple Deluxe, and Kirby: Planet Robobot, UFO flies in to give Kirby rewards when he reaches the appropriate levels. UFO can also be seen carrying items such as crystal ore in the Kirby Battle Royale battle mode Ore Express.

UFO's first appearance was in Kirby's Adventure, and his first appearance with his modern design was in the remake, Kirby: Nightmare in Dream Land. He is often found in hidden side-chambers, and once he vanishes or is defeated, will not appear again unless the stage is exited and re-entered. Only on rare occasions is UFO found out in the open in regular stages. Unlike most enemies, UFO has a special sound he emits when flying around.

In Kirby's Adventure, UFO somewhat resembles UFO Kirby, which may go in part to explain why he was redesigned in Kirby: Nightmare in Dream Land.

UFO can be found in the following levels and stages:

UFO appears in this game as part of the middle board of Wispy-Woods Land. He appears based on certain slot machine results, and travels between the two holes. If collided with, he is defeated, yielding either 1000, 1500, or 2000 points. He also appears in the ending enemy parade after defeating King Dedede, dropping a Warp Star for Kirby to start again. 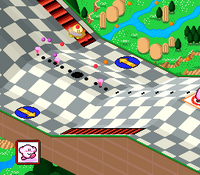 Kirby aiming for a UFO in Kirby's Dream Course.

UFOs are among the enemies that Kirby can collide with on courses in this title. When he bumps into one while not in possession of another ability, he will transform into a flying saucer, allowing him to move freely about in the air, though unable to move up or down while in saucer form.

In Kirby's Dream Course, UFO can be found in the following courses:

UFO appears as a rare enemy in this game, only appearing in stage 11-3, and is worth 600 points on defeat. He drops the Block Flip item. When defeated, UFO's head detaches from his body.

UFO has a more prominent role in the Air Hockey bonus game, where he serves as Kirby's opponent. When UFO scores, he will laugh, revealing him to have a mouth.

UFOs make an appearance in Kirby Tilt 'n' Tumble, being much larger and bluer than usual. They are often found in open sky, where they move in erratic patterns and make a characteristic whirring sound. They take two hits from an Air Bullet to defeat, and always drop a Balloon when defeated in these open air situations. UFOs can also be found holding position or on patrol paths closer to the ground.

In Kirby Tilt 'n' Tumble, UFO can be found in the following levels and stages:

As in Kirby: Nightmare in Dream Land, UFOs are uncommonly found in some of the rooms around the Mirror World, being found in Cabbage Cavern, Mustard Mountain, Olive Ocean, Peppermint Palace, and Candy Constellation. They behave the same as usual. 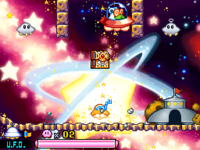 A bunch of UFOs appearing alongside Doc in Kirby: Squeak Squad.

UFO retains his character and rarity in this title, though his value is somewhat diminished by the presence of Doc, who can also provide the UFO ability.

UFO can be possessed by Ghost Kirby. When possessed, UFO can be made to fly around, fire a laser blast, and veer in a random direction briefly whenever the 'jump' button is pressed.

UFO can only be found in Gamble Galaxy - Stage 3. Many of them in this stage appear alongside Doc in the final room.

UFO appears in yarn form in Kirby's Epic Yarn and Kirby's Extra Epic Yarn, though the lack of Copy Abilities makes him a neutral creature. He appears rarely in Space Land, though he can appear in large numbers during the Rocket and Star Shooter sections. If Kirby uses his Yarn Whip to roll UFO into a ball, throwing the ball will create three homing projectiles that target nearby enemies.

In Kirby's Extra Epic Yarn, UFO can be found in Stage 4 of the Sub-Game Slash & Bead. Meta Knight can destroy UFOs by slashing them with his sword or using his Special while they are on screen.

UFO can be found in the following levels and stages in Kirby's (Extra) Epic Yarn:

In Kirby's Return to Dream Land, UFO appears in the Goal Game to deliver rewards to the player characters if they reach a certain height. UFO also appears in the the Scope Shot Sub-Game. In Scope Shot, UFO will sometimes fly across the screen, and can be shot down for 1200 extra points.

This is UFO's first 3D appearance in the Kirby games.

UFO, as he appears in Kirby: Triple Deluxe.

UFO once again appears in the Goal Game in Kirby: Triple Deluxe. His sprite from Kirby: Nightmare in Dream Land is also depicted in a Keychain.

UFO appears for the first time as an enemy in 3D in the Copy Ability Testing Area once the game file is completed 100%. He provides the UFO ability as usual. Using the Kirby series Kirby amiibo also grants the ability.

UFO also appears once again in the Goal Game, with his role unchanged from before.

UFOs appear in the Ore Express battle mode, in the Twisty Tunnels and Logjam Pass stages. They carry ores and need to be struck to drop them.