The Star Rod is a magical scepter that serves as the symbol of Dream Land and acts as the heart of the Fountain of Dreams, supplying it with the power to send pleasant and peaceful dreams to all of the residents of the kingdom. According to legend, the large glowing star that forms the tip was a fragment from a star that had fallen into Dream Land long ago, and the Star Rod itself created the Fountain of Dreams.[1] When King Dedede shatters the Star Rod into seven pieces, the fountain ceases to function, and it becomes Kirby's task to gather all the pieces from King Dedede's friends and put it back together again. Once the restored Star Rod is in Kirby's hands, he can swing it to fire Star Bullets at rapid pace or strike close-up with a spinning jump attack; both of which he uses to battle and defeat Nightmare.

The Star Rod made its first and most significant appearance in Kirby's Adventure, where its seven scattered pieces need to be collected from each level boss in the game before it can be reassembled for Level 8: The Fountain of Dreams, where it is then used as the Last Battle Ability against Nightmare. Since then, its subsequent appearances in the Kirby series (outside of the remake of Kirby's Adventure) have been little more than references and cameo appearances. Aside from this, the Star Rod appears as an item in the Super Smash Bros. series and also appears in the anime series Kirby: Right Back at Ya!, where it is used to defeat eNeMeE. 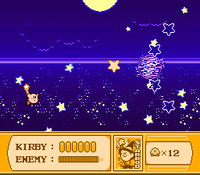 In Kirby's Adventure and Kirby: Nightmare in Dream Land, Kirby uses the Star Rod as the Last Battle Ability against Nightmare, both in his "Power Orb" and "Wizard" forms. In each of these fights, the primary move that Kirby can perform with the Star Rod involves him swinging it to fire a Star Bullet forward, which deals damage on impact. When Kirby is on the ground fighting Nightmare Wizard, he can also attack by performing a spinning jump from the ground with the Star Rod out to hit more directly, though this does not do as much damage as the Star Bullets. Unlike other abilities in Kirby's Adventure and Kirby: Nightmare in Dream Land, Kirby keeps the Star Rod even if he is hit or defeated (granted he has any extra lives left), only parting with it in the epilogue once Nightmare is defeated.

The Star Rod does not appear as an ability in any other Kirby game, but it does appear as an item in the Super Smash Bros. games (details in section below). 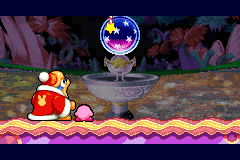 The Star Rod serves as the central collectible item in both Kirby's Adventure and Kirby: Nightmare in Dream Land, as Kirby's main goal is to find each of the seven scattered pieces of the Star Rod from each of the level bosses. The scattered pieces resemble the whole Star Rod, but are monochrome—each displaying only the color representing their corresponding level. Collecting the level's Star Rod piece after defeating the boss is a necessary prerequisite for moving on to the next level, and Kirby is obligated to do a victory dance after picking one up.

Once the Star Rod is fully reassembled, Kirby uses it in place of his usual Copy Ability to battle Nightmare in Level 8: The Fountain of Dreams. It can fire an unlimited number of Star Bullets at rapid pace in order to deal with this looming threat to Dream Land. Once Nightmare is finally vanquished, Kirby then flies back to the Fountain of Dreams on his Warp Star and deposits the Star Rod back atop the fountain where it belongs.

As in Kirby's Adventure, Star Rod pieces are collected after defeating the bosses of the main levels of Kirby's Pinball Land. Here, however, they are little more than cosmetic, as the Star Rod itself is not reassembled at any point.

In Kirby's Block Ball, Kirby can be seen holding the Star Rod in the cutscene shown if the player passes the Border Line in a stage. The Star Rod is also seen being held by Kirby on the file select screen upon achieving 100% completion.

In Kirby Super Star and Kirby Super Star Ultra, at the end of each level in Milky Way Wishes, as well as in the opening cutscene, the Star Rod can be seen in the background on the Fountain of Dreams. It is not interacted with directly at any point.

In Kirby's Star Stacker for Game Boy, Kirby can be seen holding the Star Rod in an alternate version of the title screen that is unlocked upon achieving 100% completion.

The Star Rod, alongside the Magical Paintbrush and the Triple Star, as one of Kirby's rare Stone transformations in Kirby's Return to Dream Land

In Kirby's Return to Dream Land, the Star Rod reappears as a Stone transformation, alongside the Magical Paintbrush and the Triple Star.

In Kirby: Triple Deluxe, the Star Rod appears in keychain form, using its sprite from Kirby: Nightmare in Dream Land. It is a rare keychain, and can be found in Fine Fields - Stage 1 (making it the first rare keychain in the game).

In Kirby Fighters Deluxe and Kirby Fighters 2, the Star Rod makes a cameo appearance in the Fountain of Dreams stage, appearing in the background. Additionally, during the battle with Team DDD in Kirby Fighters Deluxe, when King Dedede energizes himself with the Fountain of Dreams, he gains a new hammer called "Star Rod Hammer Dedede Custom" which he uses to battle Kirby. This hammer resembles a cross between the Star Rod and Dedede's standard hammer, having a blocky, golden, star-emblazoned mallet with a swirling white-and-pink handle.

The Star Rod makes a small cameo appearance in the Kirby Star Allies Celebration Picture "A Dream Above The Clouds".

In Kirby Star Allies, the Star Rod can be seen in the Celebration Picture, "A Dream Above The Clouds". It is found to the left of Rick.

In Kirby's Dream Buffet, artwork depicting Kirby with the Star Rod from Kirby's Adventure is used for one of the Character Treats.

The Star Rod being used to fire a star projectile in Super Smash Bros. Ultimate

In all installments of the Super Smash Bros. series, the Star Rod appears as an item which fighters can use in battle. Here, it can be used either to hit the opponent directly, or to shoot stars at the opponent by using a side tilt or side smash. In contrast to the Star Rod's infinite power in the Kirby games, it only has enough power in it to fire 16 stars here. After all 16 stars are used, the item can still be swung at close quarters to strike opponents, and will immediately vanish when it hits the ground after being tossed or dropped. Also, in Super Smash Bros. Melee , when the item is used by Captain Falcon, the Star Rod releases five stars at once, and if used by Sheik, it fires two.

Additionally, representations of the Star Rod appear in collectable material throughout the series, as follows:

The Star Rod makes an appearance as the final Copy Ability that Kirby uses in the main anime series Kirby: Right Back at Ya!, appearing in the episode Fright to the Finish. Kirby obtains this ability by inhaling his Warp Star when it is tossed to him by Tiff while in a dream that eNeMeE is haunting. Using this ability, Kirby is able to conjure a wave of star-shaped projectiles that envelop eNeMeE and destroy him; the ability described by eNeMeE himself as his only weakness.