Stone is a Copy Ability that debuted in Kirby's Adventure, and is primarily obtained by absorbing a rock-based enemy, or even rocks created as debris from boss attacks. Its primary use entails Kirby transforming into an immobile stone that is immune to most attacks and will slide down slopes and crush enemies or pound stakes beneath. Depending on the game, he may simply appear as a stone version of himself, or he may appear as one of several statues, which change in each game. Kirby can also obtain the Stone ability through Copy Essences or Copy Essences Deluxe. 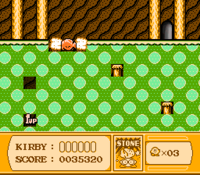 Stone makes its debut along with the concept of Copy Abilities themselves in Kirby's Adventure. This game establishes Stone as an ability that causes Kirby to transform into a rock, and plummet downward, becoming all but invulnerable and dealing damage on impact, as well as sliding on slopes. Kirby only has one form here, that being a pink-ish rock with a level bottom and two closed eyes on it. It is provided by Rocky.

Stone returns in Kirby's Dream Course, where it functions similar to the Needle ability. When used, Stone causes Kirby to stop moving, and this can also be used in mid-air to force Kirby to fall straight down. However, if Kirby lands on a slope, he will slowly slide down it. The ability is obtained from Rocky.

Notably, in the 2P Game, when Stone is used, it will be held during the opponent's turn, even if a different ability was acquired while using the Stone form. Additionally, while in Stone form, attacks from the other player can be resisted. Stone cannot be used to protect against hazards such as Gordos, however.

Stone returned as an ability in Kirby's Dream Land 2, where it functioned as before.

Throughout Kirby's Dream Land 2, there are specific blocks which can be broken only with the Stone ability. They are depicted as fragile-looking.

Stone appears as one of the four abilities in this game, obtainable from Rocky or an Ability Changer item. When Kirby uses this ability, he transforms into a stone and falls straight down, crushing lesser blocks along the way until he hits a harder object or the paddle. The Burning ability can be said to be the opposite of Stone in this game, since it travels straight up rather than straight down for the same effect. 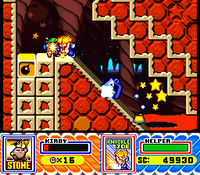 In Kirby Super Star and Kirby Super Star Ultra, Stone can be obtained from Rockys and the boulders appearing during the battle against Fatty Whale and Wham Bam Rock. Kirby's visual appearance changes by turning brown and wearing a helmet with a tail on top.

Upon using the ability, Kirby randomly turns into one of a wide variety of objects. In the original Kirby Super Star, Kirby can turn into the default pink rock from Kirby's Adventure, a star block, an eight-ton weight, a stone statue of himself, a Macho Statue, and rare gold statues of Mario and Samus Aran; the remake adds Mount Fuji, an iron fist, statues of Rick, Kine and Coo, a Thudd, a Brick Block, and the rare gold Dream Hatcher (HAL Laboratory's logo). While transformed, Kirby is completely invincible, but cannot move unless sliding down a slope. Pressing the B button while in stone form returns Kirby to his usual self.

With the stone ability equipped, Kirby can create a Rocky as a helper, which possesses the same skills as Stone Kirby does.

Stone appears again in Kirby's Dream Land 3, where it functioned much like in Dream Land 2. The inclusion of more animal friends gave more possibilities for combinations:

Throughout Kirby's Dream Land 3, there are specific blocks which can be broken only with the Stone ability. They are marked with the Stone icon on them.

In Kirby 64: The Crystal Shards, Kirby's stone form is more mobile, since he keeps his limbs.

Stone appeared in Kirby 64: The Crystal Shards, where it took on a slightly different form. Here, instead of simply becoming a stone and falling, Kirby would turn into a rounded boulder, fall to the ground, then morph into a stone version of himself and start walking around. In this form, he was invulnerable, but could not jump, and would roll automatically down hills. Stone could additionally be combined with other abilities or itself to produce varying results.

Stone appears as an ability in Kirby & The Amazing Mirror. In this game, Kirby's Stone transformation resembles the rounder version in Kirby's Dream Land 2 and Kirby's Dream Land 3, which rolls down slopes quickly. In addition, its color will change depending on the color of the Spray Paint that Kirby has. Stone can be obtained from Rocky and Giant Rocky.

The Smash ability can also use the Stone Change, which functions the same.

Stone Kirby returns in Kirby: Canvas Curse, once again provided by Rocky. In this appearance, Kirby transforms into a well-polished faceted stone gem and falls straight downward, defeating enemies and crushing metal blocks below. Stone Kirby cannot ride up a Rainbow Line while in Stone form.

Stone Kirby sliding down a slope in Kirby's Return to Dream Land.

After being absent from Kirby: Squeak Squad, Stone returns in Kirby's Return to Dream Land, where it can be obtained from Rocky and the Mid-Boss Moundo and has gained new moves that allow for it to be used in a more varied manner. Apart from the traditional power to turn to stone and slide down hills, Kirby may now transform into a bigger-than-normal statue and slam onto the ground with great force, as well as use a powerful low-range uppercut attack that knocks enemies into the air. The latter is also the first Stone move in the history of the series that does not transform Kirby's entire body. Stone Kirby gets a new hat starting in this game, which is a set of rocks on a purple, pink, and orange base with a pair of horns.

Similar to Kirby Super Star and its remake, Stone Kirby can transform into various sculptures, with greatly increased forms in Kirby's Return to Dream Land.

Stone returns in Kirby: Triple Deluxe, bearing the same characteristics it had in Kirby's Return to Dream Land. However, two notable changes were made. Firstly, Stone Uppercut was changed so that it can be charged to deal more damage. Secondly, if Kirby tries to dash while in Stone form, he will pivot in that form slightly. This can be done to change the angle from which the player can see the stone sculpture that Kirby changes into. This technique deals no damage, and is only there for cosmetic purposes.

Some changes were made to the forms that Kirby can take in Triple Deluxe, having a different list from Kirby's Return to Dream Land. 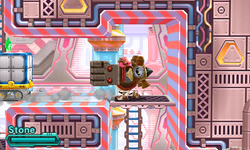 When combined with the Robobot Armor, Stone turns into a pair of heavy block fists that can be used to slam objects aside.

Stone returns in Kirby: Planet Robobot, receiving no change in its move-set.

Stone can be combined with the Robobot Armor to enter Stone Mode, which allows the suit to punch away heavy objects.

Some changes were made to the forms that Kirby can take in Planet Robobot, having a different list from Kirby: Triple Deluxe.

In Kirby Star Allies, when combined with a Blizzard attack, Stone Kirby transforms into the Curling stone and can slide much more quickly down slopes while leaving a trail of ice behind.

Stone returns in Kirby Star Allies, retaining its essential functions from previous installments. It can also be used in a number of Friend Abilities; most notably the varieties of Curling and Geokinesis.

Some changes were made to the forms that Kirby can take in Kirby Star Allies, having a different list from Kirby: Planet Robobot.

Kirby Star Allies is the first game in the series that adds new sculptures for the Stone ability via game updates.

In all of the installments of Super Smash Bros., Kirby's down special move is the Stone ability, and behaves exactly as it does in Kirby's Adventure. Starting with Melee, Kirby transforms into various objects: the default pink rock, a 100-ton weight, a spiked ball, a Star Block, a Thwomp from the Mario universe, Lip's garbage block from Panel de Pon, and in Ultimate, a Treasure Chest from The Legend of Zelda: Breath of the Wild. There are a few key differences in the Super Smash Bros. series, however: Kirby can only remain in stone form for a short period of time, he is vulnerable to grabs, and may he still be harmed if he is hit by a powerful enough attack.

Stone Kirby makes a few appearances in the anime series Kirby: Right Back at Ya!, first appearing in the second episode, A Blockbuster Battle. In the anime, Kirby gains a grayish coloration and hat similar to Stone's appearance in Kirby Super Star. When Kirby transforms, he turns into a large, pink, blocky version of himself which is able to walk around, similar to how Stone functions in Kirby 64: The Crystal Shards. Even without being actively transformed, however, Stone Kirby still packs a wallop with body slam attacks, as he is much heavier than he normally is.