Kirby is featured as the main protagonist of Kirby: Right Back at Ya!. He is an inexperienced Star Warrior, and is attempting to hone his skills after crash-landing in Dream Land. He is portrayed as more helpless than in the games, often running from danger rather than attempting to fight it, though this changes once he obtains a Copy Ability, becoming immensely powerful and performing feats that often dwarf his video game counterpart. His best friends are Tiff and Tuff, and Meta Knight acts as a type of mentor and guardian to the puffball. He is often antagonized by King Dedede and Escargoon.

Kirby is a small pink ball-shaped entity with red feet and beady blue eyes. Although Meta Knight explains that Kirby is hundreds of years old, he is still immature due to waking up 200 years before he was supposed to, looking and behaving like a toddler. True to this depiction, Kirby is a fair amount smaller than Meta Knight, as opposed to his video game counterpart, who is roughly the same size as him. Despite his demeanor, Kirby is quite durable, able to take substantial physical punishment, and can even swim in boiling hot water without any issue. Kirby is granted this extensive endurance by his Warp Star, which Meta Knight explains is the source of his power. In Kirby's Duel Role, Kabu explains that Kirby was a failed creation of eNeMeE; a powerful creature that he simply could not control, which is why Night Mare Enterprises seeks to destroy Kirby at all costs.

Though Kirby is a simple-minded character, he has a few important possessions to his name. The most important of these are his Warp Star (which can shrink down to the size of a trinket) and his starship, which allows him to travel through the cosmos. Kirby also has a house in Dream Land which was built for him by the residents of Cappy Town, though Tokkori often takes it over, prompting Kirby to sleep in the nearby tree instead.

Similarly to his video game counterpart, Kirby has a voracious appetite, and can eat much more than would intuitively fit inside his small body. This is demonstrated in episodes like Watermelon Felon, where King Dedede goads Kirby into inhaling a massive pile of fruits and vegetables which likely weighs several tons as supporting evidence for Dedede's fraudulent case against him. Tiff speculates in Beware: Whispy Woods! that Kirby can do this because his stomach leads to another dimension entirely, and Kirby is later shown in that episode to be able to search his inner stomach void to find things he has swallowed and regurgitate them. If Kirby swallows an object that has a specific power associated with it, he gains a Copy Ability which he can use to fight his enemies. Kirby can also spit objects back out which he inhales with destructive force, as seen in The Flower Plot when he spits King Dedede's cannon volley back at him. 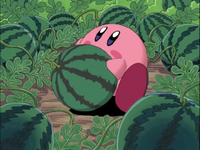 Kirby acts much like a small child, unable to speak in full sentences, instead repeating the babble word 'poyo'. The only other words he can muster are characters' names, the names of certain Copy Ability moves when using them, and the names of his favorite things, such as watermelons. Appropriately, Kirby is quite naïve, often wandering cluelessly into dangerous situations and as such, requires continuous supervision from Tiff, Meta Knight, and other characters. Despite this, Kirby does have some self-awareness, and is generally able to understand what people say to him. Kirby has a habit of mimicking other characters emotional expressions, even if he does not understand the emotion in question. An example of this is in Escar-Gone, where Kirby mimics Escargoon's heady sigh while at the beach with him. Another is in the episodes featuring Knuckle Joe, where Kirby imitates his tendency to rub his nose.

Kirby lives very much in-the-moment, lacking the ability to truly understand deception or to hold grudges. He only becomes angry when he is being attacked by a monster or is being directly insulted by another character, though this anger quickly dissipates once the conflict ends. By contrast, Kirby also has a very good memory, and can be extremely persistent when given a task to complete, as evidenced in episodes like The Thing About the Ring. Most of the time, he has a cheery disposition, and will stop to help or save someone in need. Indeed, his reputation as a hero is well-deserved, since he has saved Tiff and other characters from certain death many times. Kirby is a lover of food of all kinds, and will cheerfully eat even foods that the other characters find disgusting. As such, he is Chef Kawasaki's best customer.

Perhaps the most notable aspect of Kirby's personality is how it shifts depending on what form he takes. When he is in his normal form without a Copy Ability, he is often hesitant to fight, and will run away from pursuing monsters. Upon gaining an ability, however, he becomes bold and determined, and will fight head-on so long as it is clear that he can actually best his opponent. Generally, Kirby tends to act obliviously unless he or someone he cares about is faced with a dangerous situation, whereon he will tap into his inborn talents and step in to defend himself and/or others. Kirby's most notable personality flaw is his often mindless gluttony, which is frequently used by his enemies to entrap him in some form or another, and also tends to get him in trouble with the denizens of Cappy Town. 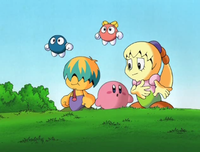 Kirby stands with his closest friends after defeating a monster.

Kirby's naivete and cheerful demeanor typically results in him being kind to everyone he knows, even if they have had a history of antagonizing him. Due to his temperament, however, Kirby cannot be said to have a particularly deep relationship with any of the other characters. 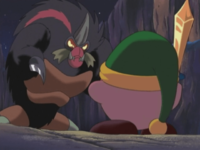 Kirby's main role in the story is to battle and defeat the monsters that are sent into Dream Land, in this case, battling Kirisakin using Sword.

Being the central protagonist and namesake of the show, Kirby is the one who steps up most often to resolve the conflict of any given episode, usually by defeating the monster(s) of that episode. The overall story of the show revolves around Kirby's journey to learn how to harness his natural talents as a Star Warrior so that he can defeat eNeMeE and free the universe from the tyranny of Night Mare Enterprises. In the process, he regularly trounces the monsters that King Dedede calls in to Dream Land for one reason or another. Despite Kirby's immense power and potential, he is in constant need of guidance and supervision due to his naivete and infantile nature, as well as his gargantuan appetite which often gets him in trouble with the local townsfolk.

As Kirby is unable to speak intelligibly, he is often on the sidelines of the plot for most episodes; when he needs to participate in the story, he will often have another character act as a proxy, usually Tiff. Due to his mysterious and potent abilities, he is most often used as a deus ex machina for other characters, in order to solve their problems in any given episode's story. On the flip-side, Kirby is also often inadvertently the cause of certain problems, which he usually has to fix later on. Throughout the course of the show, he is often the scapegoat of Cappy Town for many of the calamities that happen throughout the series, even if Kirby himself had nothing to do with the disaster. This is most notable in Episode 98: Cappy Town Down, where Kirby is momentarily blamed when a Destroya that was hunting him torched Cappy Town in the process. In these instances, Kirby's nearest friends step in to defend him, and the conflict is usually resolved.

Kirby appears in all 100 main episodes of Kirby: Right Back at Ya!, along with the Kirby of the Stars Pilot and Kirby 3D. For a full list of his appearances and role in each one, see this page.