Pukey Flower (sometimes shortened to Pukey, pronounced poo-key) is a carnivorous plant monster which resides in the heart of Babagahara's caves. It appears in the episode Flower Power, and serves as the main enemy to be overcome. Its main attack strategy is to spawn Noddys which cause sleeping sickness in its victims, then draws well-wishers to its lair to consume them. Its flower petals have the ability to wake targets of its Noddys, and its spines provide the Needle Copy Ability when swallowed by Kirby.

The Pukey Flower is a massive bulbous plant which grows in dark caves and gives off its own light. Its body consists of a large green bulb with spiny cactus-like protrusions on it which can open and close slowly, an enchanting pink flower in the center which acts as its light source, and eight vine-attached Venus fly trap-like mouths which can constrict its foes and swallow its prey. It is a formidable monster, able to subdue even a powerful warrior like Meta Knight, and it is also intelligent, able to identify weapons like the Galaxia and act to disarm their wielders. Unlike typical plants, the Pukey Flower can feel pain acutely, as evidenced when Tuff plucks one if its flower petals.

The Pukey Flower's primary feeding strategy is to spawn a swarm of Noddys which roam the countryside looking for creatures who will eat them. Once ingested, the Noddys induce sleeping sickness in the target, which can last for a century or more depending on severity. It then relies on the caretakers and/or relatives of the afflicted creatures to take them to the plant in hopes of using the aroma from its flower, which can wake the afflicted creatures, and then ensnares them once in range to consume them. 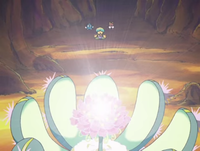 Tuff and Fololo & Falala discover the Pukey Flower in its den.

The Pukey Flower makes its appearance in the episode Flower Power. After one of its Noddys puts Kirby to sleep, Tuff and Fololo & Falala resolve to travel into Babagahara to use the flower's aroma to wake Kirby up, as Tiff and Meta Knight covertly follow. It is not until they reach the flower that Meta Knight reveals it to be a monster, and a trap set by King Dedede and Escargoon to get Kirby eaten.

The Pukey Flower attacks Tuff and Fololo & Falala first with its extending mouths, prompting Meta Knight to cut the three holding the kids off. Meta Knight must then struggle against the five remaining mouths and wait for Tuff to come in and help by plucking one of the Pukey Flower's petals and using it to revive Kirby. Once he is on his feet, Kirby inhales the spine-like protrusions on the Pukey Flower to obtain the Needle ability, and use it to sever four of the five remaining mouths while pinning down the bulb. The last mouth, clogged by a Noddy spat out by Kirby when he woke, tries to snap at Tuff as a last resort, but Meta Knight tosses a torch into its bulb, lighting it ablaze and killing it.