Marx is a mischievous, small, round, jester-like creature from Popstar who serves as the final boss and main antagonist of Milky Way Wishes from Kirby Super Star and its remake, Kirby Super Star Ultra. In this role, he feigns to be Kirby's ally and instructs him to summon the Galactic Nova to stop the Sun and Moon from fighting, but then steals Kirby's wish at just the right moment to gain immense magical power, prompting Kirby to battle and defeat Marx before he takes control of Popstar. Since this role, Marx would only make occasional cameos in various Kirby games before becoming playable for the first time as a Dream Friend in Kirby Star Allies.

In his default form, Marx is light purple and round with large eyes, no arms, a red bow tie, brown shoes, and a jester hat which has a style and color scheme similar to Mirror Kirby's hat in older games. His eyes are rather large and bulbous when compared to his body, and are very rounded. He typically has an open smile on his face, with two small fangs showing if he smiles wide enough. These fangs are more prominent when Marx shows his true form. Marx is often seen balancing and rolling around on an inflatable ball like a clown, and can punt this ball at his enemies to attack them in Kirby Star Allies.

Marx's true form has a large pair of wings made of glowing floating crystals which shift in color and are supported by two yellow arm-like appendages with claws on them. This form of Marx has a longer bow tie and much more menacing eyes. He also becomes somewhat larger in stature, at least when fought as a boss in Kirby Super Star. In Kirby Star Allies, Marx can assume this form at will in order to fly around and access his more potent moves.

Marx uses a variety of moves in battle. His main ability is teleporting, but he has many other attacks, as detailed below. 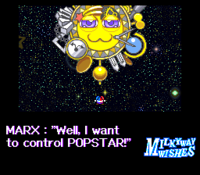 Marx wishing to Nova for control over Popstar.

Marx makes his debut and most defining appearance in Kirby Super Star and its remake Kirby Super Star Ultra as a character in Milky Way Wishes. Here, he appears before Kirby to inform him that the only way to stop the Sun and Moon from fighting is to gather the stars from each planet surrounding Popstar and use their power to summon the great comet Nova, who can grant the wishes of whoever summons it. While seeming innocent at first, when Kirby carries out this task and calls forth the Nova, Marx boots the pink puffball aside and steals his wish, making it known to Nova his desire to rule over Popstar. From here, Marx assumes his menacing true form and gloats to Kirby about having orchestrated the whole scenario to grab this opportunity at power, then leaves Kirby to float aimlessly in space. However, Kirby is able to rally the stars he collected and chase after Nova and Marx using the Starship. 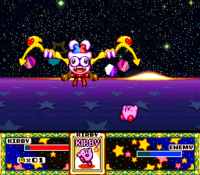 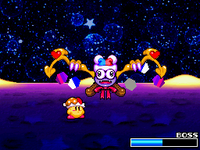 After the Galactic Nova stage is cleared, Kirby is automatically thrown onto an unknown planet where he must do battle with Marx in his powered-up state. In this fight, Marx uses a variety of outlandish attacks, including dropping seeds that rapidly sprout as spiky vines, shooting lasers from his mouth, and splitting himself in half to create a black hole. Despite these horrific powers, Kirby is able to overcome the traitorous jester and defeat him, sending him careening into the deactivated Nova to obliterate them both and restore peace to the Milky Way. Despite this seeming annihilation, Marx apparently survived and is now a friend of Kirby's (if his appearance as a Dream Friend in Kirby Star Allies is to be taken at face value).

In addition to his role in Milky Way Wishes, Marx is also fought as the last boss in The Arena. In Kirby Super Star Ultra, Marx has a role at the end of The True Arena mode. Here, it is revealed that, after his defeat at the ending of Milky Way Wishes, Marx's inert body began to absorb errant pieces from Nova as flashes of energy. With this new power, Marx is reincarnated as Marx Soul, the final boss of this mode. Marx also appears on a card in Kirby Card Swipe. 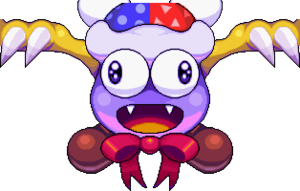 In Kirby Mass Attack, Marx appears in the sub-game Kirby Brawlball as the fourth and final boss. He is much bigger than in his previous appearances. His Shooter Cutter and Rush attacks serve as objects that can push Kirby down. His Marx Laser can freeze Kirby for a few seconds if he's caught in it. With his Black Hole attack, he will suck up random enemies, then shoot them out of his mouth. These enemies can't touch Kirby, but he can be sucked by the attack as well, which may cause the player to lose sight of him. His Seed Attack vines appear as obstacles in the field. Copies of his original form, known as the Minimarx,[from internal data] also appear in the field. Kirby can defeat him for two extra Kirby balls, though this can only be done up to five times.

In Kirby's Return to Dream Land, Marx makes two cameo appearances. One of Stone Kirby's transformations is of Marx on his ball. Marx proper can also be seen among the audience in the Kirby Master video.

In Kirby: Triple Deluxe, Marx again appears as a Stone sculpture, again riding his ball, but this time paired up with Magolor. He also appears among the audience in the Kirby Master video. Both Marx and Marx Soul appear as Keychains.

The "Marx's Hat" costume for Beam Kirby from Kirby Fighters 2

In Kirby Fighters Deluxe, the Beam Ability's Rare Outfit is made in Marx's likeness. When being worn, Kirby will wear Marx's Hat and a staff with a purple orb. This outfit returns in Kirby Fighters 2.

In Kirby: Planet Robobot, Marx appears as a sticker.

Marx fires the Team Attack laser with Kirby Piggybacking on him.

Marx appears as a Dream Friend in Kirby Star Allies, added with Version 2.0.0 of the game on March 28th, 2018. His appearance here marks the first time he is playable in the Kirby series.

Marx's attack style revolves around his ability to kick jester balls at his opponents and, while flying, use several attacks from his boss form. He is able to receive elemental powers from other allies which can further boost his arsenal.

When given a certain element, many of Marx's attacks take on additional effects which are reminiscent of some of his boss moves:

In addition, when Marx performs the Team Attack with his allies, it resembles the strange expression with which he fires lasers in Kirby Super Star and its remake, complete with a unique sound effect.

Kirby being attacked by Marx during the surprise boss battle in the credits for Heroes in Another Dimension.

Marx appears as a surprise bonus boss in the Happy Ending credits of Heroes in Another Dimension, where he utilizes all of his moves from the original boss fight. Interestingly, he is given his laugh from Kirby Super Star Ultra while the playable Marx uses his Kirby Super Star laugh. If he is not defeated by the time the credits come to a close, he flees.

He attacks in a fixed order on loop as follows:

The teleports in-between each attack are random.

In Super Kirby Clash, Marx has two gear in his likeness. These items are a weapon named "Marx's Staff" and an armor called "Marx's Hat". When paired together, these items are an almost exact match for the Marx's Hat costume from the Kirby Fighters games.

In Kirby's Dream Buffet, a Marx costume and color palette can be chosen for Kirby once they are unlocked. Additionally, Marx appears as a Character Treat, depicting his artwork from Kirby Super Star. 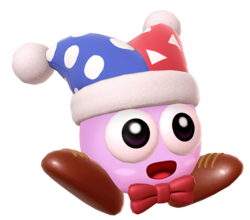 Artwork of Marx in his jester form from Super Smash Bros. Ultimate.

In Super Smash Bros. Ultimate, Marx retains his role as a boss and his moveset from Kirby Super Star (except the arrow attack), but has three new attacks which can greatly weaken the fighter's shield:

Marx's cutters and ice balls can be inhaled or reflected. After beating Marx, he bounces on the stage sporadically while screaming before he lands on the floor with his wings separated.

In Classic Mode, the only characters to fight Marx are Kirby, Rosalina & Luma, Inkling, and Sephiroth.

Additionally, a hat based on the one Marx wears can be worn by Mii Fighters.

According to Masahiro Sakurai during his "Mr. Sakurai Presents 'Sephiroth'" video for Super Smash Bros. Ultimate, Marx was initially much creepier than in his final appearance, to the point where he "wasn't suitable for all audiences", so changes had to be made to tone him down.[1] It is unclear whether this is referring to his original Kirby Super Star appearance or his Super Smash Bros. Ultimate appearance.

Marx's theme song is "Vs. Marx" (also titled "Meddlesome Marx"). Originally his boss battle theme in Kirby Super Star and its remake, his theme is remixed to make a surprise appearance in Kirby Star Allies when fighting Morpho Knight as Marx.