This article is about the sword-wielding foe with the magenta face mask and red plume, and should not be confused with Sword Knight.

Blade Knight is an enemy in the Kirby series that debuted in Kirby's Adventure along with his cousin Sword Knight. He is a swordsman of small stature that wears green armor with a red plume on his helmet. He attacks by swinging his sword and grants Kirby the Sword Copy Ability when inhaled.

Blade Knight wears a set of green armor with a red plume on his helmet which has a magenta face mask and a gold visor. He wears a blue belt around his body, white gloves, and brown boots. On his shoulder pauldrons, he has two gold symbols which resemble tridents on them.

Since Kirby's Return to Dream Land, Blade Knight is left-handed, but becomes right-handed like Sword Kirby when recruited as a Friend in Kirby Star Allies.

Kirby about to run down a Blade Knight using the Wheel ability in Kirby: Nightmare in Dream Land.

Blade Knight makes his first appearance in Kirby's Adventure and its remake, Kirby: Nightmare in Dream Land, along with Sword Knight. Both of them act mainly the same in this game and both provide the Sword ability when inhaled. In Kirby's Adventure, it can also be difficult to tell the two apart.

Blade Knight can be found in the following levels and stages: 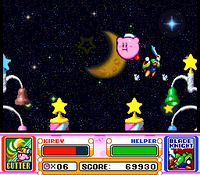 Kirby and a Blade Knight helper in Kirby Super Star.

Blade Knight appears in Kirby Super Star and Kirby Super Star Ultra as the primary source of the Sword ability, acting much the same as in his last appearance. He can be recruited as a Helper representing said ability, whereupon he will gain all of Sword Kirby's moves and gain an Infinity Jump, with a drawback being reduced maximum health compared to the pink puffball.

When Blade Knight is damaged in both games, a single eye is revealed underneath his face mask.

In the Kirby Quest Sub-Game from Kirby Mass Attack, Blade Knight and Sword Knight appear together with Meta Knight during certain battles, which references their roles in Kirby: Right Back at Ya!.

A Blade Knight from Kirby's Return to Dream Land.

Blade Knight makes his first 3-D appearance in Kirby's Return to Dream Land. His main objective is to either hold position or walk slowly and swipe at Kirby if he gets close enough. He also has a super variant called Super Blade Knight and a similar-looking Mid-Boss called Gigant Edge.

In Kirby's Return to Dream Land, Blade Knight can be found in the following levels and stages: 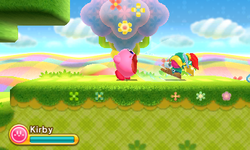 In Kirby: Triple Deluxe, Blade Knight can be found in the following levels and stages:

In Kirby: Planet Robobot, Blade Knight can be found in the following levels and stages:

In Kirby Fighters Deluxe, a Rare Hat based on Blade Knight can be unlocked for Sword Kirby. It is unlocked by completing Single Player mode with Sword.

Blade Knight appears in Kirby Star Allies, and is the main representative of the Sword ability, being recruitable as a Friend who can fight with just as much prowess as Sword Kirby. When recruited, Blade Knight can also have his sword infused with elements such as Sizzle and Bluster. Like many Friends, Blade Knight has less health than Kirby.

Blade Knight has his own adventure in Guest Star ???? Star Allies Go! and can be selected in The Ultimate Choice as a playable character.

Blade Knight can be found in the following levels and stages in Kirby Star Allies:

Blade Knight in Kirby and the Forgotten Land.

Blade Knight reappears in Kirby and the Forgotten Land, and once again provides the Sword ability. In addition to his regular sword swipes, Blade Knight can also perform the Sword Spin technique. He may be seen guarding a specific location, or may chase after Kirby.

In Kirby and the Forgotten Land, Blade Knight can be found in the following stages:

In Kirby's Dream Buffet, Blade Knight appears on a Character Treat, using his artwork as a Friend with Blizzard Sword from Kirby Star Allies.

Blade Knight appears as a Trophy in Super Smash Bros. for Wii U:

Artwork from Kirby: Right Back at Ya!

In Kirby: Right Back at Ya!, Blade Knight is an assistant to Meta Knight, and has the same basic job as Sword Knight. In the English dub, he speaks with an Australian accent. In that dub and several others, however, Blade Knight doesn't speak as coherent as he does in the Japanese version, sometimes to the point to where he can’t be understood at all by the viewer. Despite that, the characters in the show seem to understand him perfectly fine. This happens quite possibly because of his face mask.