Clown Acrobot[1] is an enemy that debuted in Kirby: Triple Deluxe. It yields the Circus ability when swallowed.

Clown Acrobot resembles a clown, except it has a spinning top-like bottom where its feet would be. It bounces along the ground with either a hula hoop or juggling balls, and apart from its surprising range, is not all that dangerous. Clown Acrobot is currently the only enemy to yield the Circus ability.

Clown Acrobot debuts in this game, granting the newly added Circus ability. It is first encountered in the Lollipop Land level.

In Kirby: Triple Deluxe Clown Acrobot can be found in the following levels and stages:

Clown Acrobot appears as a course hazard in Dedede's Drum Dash Deluxe, bouncing on some of the drums. King Dedede will need to avoid it while moving through the courses.

Clown Acrobot reappears in Kirby: Planet Robobot where it serves the same purpose.

In Kirby: Planet Robobot Clown Acrobot can be found in the following levels and stages: 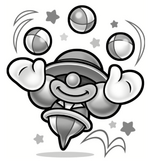 Clown Acrobot, as seen in Kirby Meets the Squeak Squad!

In the Kirby novel series, Clown Acrobot appears in Kirby Meets the Squeak Squad!. He calls himself a "superb acrobat", and is a master of juggling, able to juggle balls faster than the eye can see. When attacking, Clown Acrobot can rapidly throw his juggling balls at incredibly high speeds. He can take out as many balls as he wants with no limit. At some point, he had carelessly fallen into a trap door at an ancient temple, and was stuck in its underground rooms for a long time. He is hostile towards anyone he meets in the underground, but it is later revealed that he is normally a nice guy.

In Kirby Meets the Squeak Squad!, when Kirby and co. are in the temple's underground, they meet Clown Acrobot. He introduces himself as an acrobat, and juggles balls incredibly fast. He initially appears friendly, but then turns hostile, and throws a ball at Kirby. Kirby is knocked back, and Clown Acrobot continues rapidly throwing balls at everyone. Kirby furiously runs up to Clown Acrobot while dodging the balls, and then inhales him, gaining the Circus ability. When the group eventually makes it out of the temple, Kirby drops his Circus ability, freeing Clown Acrobot. Clown Acrobot is elated to be back at the surface, and thanks Kirby for saving him. Kirby wishes Clown Acrobot told him he was lost when they first met, but Clown Acrobot says it wouldn't be cool for a "superb acrobat" to say that, and then leaves.