This article is about the Sub-Game in Kirby: Triple Deluxe. For the canceled Game Boy Color game that can be abbreviated to "KF" as well, see Kirby Family.

Kirby Fighters is a Sub-Game from Kirby: Triple Deluxe. It is a fighting game where Kirby battles other Kirbys using various Copy Abilities until all opponents are defeated. It plays similarly to the Super Smash Bros. games, though it uses a traditional health meter and does not have any pits in the stage design. The player may play solo against CPU opponents, or may use local wireless to play with up to three other players, even if those other players do not have a copy of Kirby: Triple Deluxe. 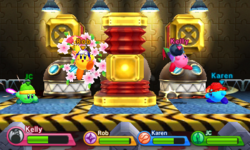 Screenshot of gameplay in Kirby Fighters with four human-controlled Kirbys.

The mechanics of Kirby Fighters are highly similar in nature to many traditional fighting games. The goal of each round is to deplete the health bars of all other Kirbys by attacking them and using certain items, while conversely blocking attacks and using healing items to avoid the same fate.

Rounds take place on a variety of stages based on various locations throughout the Kirby series, and fighters can select from a limited amount of copy abilities to use. Two primary modes exist - a single-player mode with seven rounds against a variety of computer-controlled opponents, and a multiplayer mode where players using different 3DS systems can play individual rounds against each other. The player can also play a single round with CPU-controlled characters instead of human ones in Training Mode.

There are ten Copy Abilities to select from in Kirby Fighters.

There are seven stages to battle on in Kirby Fighters, with each of them based on locations from various Kirby games.

There are eleven items that can be used in Kirby Fighters. 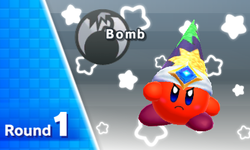 Screenshot from the beginning of the first round, which shows the player what Kirby's opponent(s) will be before the fight starts.

A regular pink Kirby fights against many CPU-controlled opponents in seven rounds. It is a time attack mode, with four difficulty levels - Easy, Normal, Hard, and Very Hard. Each difficulty level increases the difficulty of the CPU opponents that Kirby has to fight. Also noteworthy is the fact that the player can retry every fight if they fail, with the only penalty being that the timer does not reset. Thus, the ultimate goal is to complete this mode in as little time as possible.

Kirby's opponents go as follows. Note that with the exception of Shadow Kirby, the copy abilities are random, though they are never the same ability as the one Kirby has (again, excepting Shadow Kirby).

Items and hazards are enabled in this mode, but Ghost Kirby is not.

Upon completing Single Player Mode, the results screen is shown, with a rainbow-colored "CONGRATULATIONS!" text over Kirby with the winning ability doing a victory pose. The player's total time is shown on the top screen and the time it took to beat each round is shown on the bottom screen. The Copy Ability that was used to beat Single Player Mode will be marked with either a bronze, silver, gold, or rainbow medal, depending on the difficulty level.

Completing Single Player Mode with all abilities regardless of difficulty is required for 100% completion of Kirby: Triple Deluxe.

In this mode, the player can battle against nearby players who have 3DS systems. Extra copies of the game are not required, as Download Play allows anyone to join (albeit also limiting gameplay options when used).

Spots not filled by human players can be filled by CPU players, whose abilities and difficulty levels can be set. Furthermore, each player can set the color of their Kirby and their handicap, which changes their damage dealt and taken, among other effects. Items, hazards, and Ghost Kirby can also be disabled in the More Settings menu. The player can select which stage they can play on.

Each player or CPU's number of rounds won is displayed on the bottom screen.

Like in Multiplayer mode, each player or CPU's number of rounds won is displayed on the bottom screen.