List of Present Codes in Kirby and the Forgotten Land 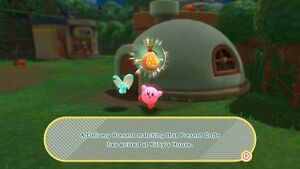 Similar to the passwords found in the Team Kirby Clash series, Kirby and the Forgotten Land features Present Codes which can be entered to receive rewards such as Star Coins, Rare Stones, Food Items, or Stock Items. Present Codes are submitted to Delivery Waddle Dee at Waddle Dee-liveries in Waddle Dee Town in exchange for Delivery Presents.

Despite official releases listing them as "English" and "日本語" (Japanese), Present Codes are not region exclusive and can be redeemed regardless of the console's region settings. However, in order to access Japanese keyboard options, the game must be loaded onto a Switch whose language is set to Japanese. Once the Code is used, the language can be changed at the user's preference and all rewards will be kept. An unopened Delivery Present will even remain next to Kirby's House to be opened in any other language.

Players who are familiar with Latin characters are able to enter Japanese language Present Codes using the Japanese romaji input option of the Nintendo Switch keyboard (日本語 ローマ字入力). This option converts wapuro romaji into Japanese script. For the purposes of this article, romaji representing hiragana (かな) are written as blue lowercase letters and romaji representing katakana (カナ) are written as green uppercase letters.

Some Present Codes from different languages are considered equivalent by the game with only the first one used granting any rewards.

These Codes are revealed in certain spots around Waddle Dee Town. If Elfilin is present, he will find the Present Codes and read them to Kirby, otherwise they are presented through narration. They are able to be redeemed without an internet connection, and will never expire.

These Codes are revealed by sources external to the game.