Sleep is a Copy Ability that first appeared in Kirby's Adventure. It is usually acquired from Noddy. When Kirby receives this ability, he stops and dons a night-cap, his eyelids grow heavy, and he falls asleep in the very spot he stands, then wakes up after a few seconds. Unlike other abilities, Sleep is almost universally a detriment to Kirby rather than a benefit, and its recurrence in the series can be seen as a joke (though some games give it some utility, with Kirby Battle Royale in particular granting it a full fighting moveset). In most Kirby series games, Sleep Kirby appears in the Game Over screen, either waking up, or continuing to sleep depending on whether the player chooses to continue, or quit.

In the debut game, Kirby's Adventure, Kirby did not change appearance when obtaining this ability. He merely fell asleep. Starting with Kirby Super Star, Kirby would obtain a spotted green cap, which he would take off once he woke up again.

In Kirby Air Ride and consistently from Kirby's Return to Dream Land onward, the color of the hat was changed to purple with yellow spots, presumably to help distinguish it from the Sword hat.

Regardless, the green sleeping cap reappears in some later games after the switch to purple was made. In Kirby: Triple Deluxe, the green sleeping cap makes a reappearance in the intro cutscene, when Kirby is sleeping in his house; the model was reused from Kirby Super Star Ultra. Green caps also appear in Kirby Battle Royale as a weapon for putting other fighters to sleep.

As Kirby is immobile during the sleep ability, there are no skills obtained when receiving it in most games.[1] In Kirby: Squeak Squad however, if Kirby gets the Ability Scroll for it, it will heal his damage a little bit during his slumber. In Kirby's Return to Dream Land, Kirby may prematurely wake up from sleep if the player shakes the Wii Remote or rapidly pushes the +Control Pad in different directions. This also works in Kirby: Triple Deluxe and Kirby: Planet Robobot, though only by mashing the Circle Pad or +Control Pad. Doing so causes a bubble to grow on his face, which will wake him up when popped. In Kirby Star Allies, shaking the controller or waggling the control stick will wake Kirby up like in past entries, but a Friend can also wake Kirby up by popping the bubble on his face.

There are also Sleep Copy Essences that exist in Kirby Super Star, Kirby Super Star Ultra, Kirby's Return to Dream Land and Kirby: Triple Deluxe. Some of these appear as a joke ability to restrict the typical choice of two copy abilities before a boss battle (such as in The True Arena). In other cases, they appear as an obstacle in areas with strong winds or currents, forcing Kirby to make difficult maneuvers to try to prevent touching the Copy Pedestals, as touching one will cause Kirby to fall asleep and return to the beginning of the area (or possibly fall to his death). Unlike other Pedestals, helpers/friends will not be changed by touching them (since there is no sleep helper), allowing them to easily bypass such segments. 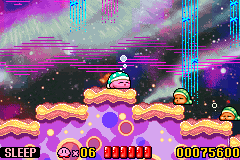 Sleep made its first appearance in Kirby's Adventure, and is obtained by inhaling Noddy or a red missile when fighting Heavy Mole. When gaining this ability, Kirby falls asleep for a few seconds and cannot be moved by the player until he wakes up. This ability is largely a novelty and does not aid Kirby in any meaningful way, and may hinder him if it happens during the Heavy Mole fight. 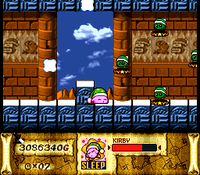 The Sleep ability is often used as a hazard in the Kirby series, by placing Copy Essences for it in ways that force Kirby to try and dodge them or be put to sleep.

Sleep returns as an ability in Kirby Super Star, here granting Kirby his spotted green cap for the first time. In addition to being obtainable from Noddy, Kirby can also get this ability by touching certain Copy Essences. Some stages turn this into an obstacle by creating challenges where Kirby has to avoid touching the Sleep Copy Essences or be forced to take a nap as he is pushed back to the start by gentle wind.

Sleep appears in Kirby Air Ride and can be obtained from Noddy, from a Copy Panel, or by using a Copy Chance Wheel or Mix. This appearance marks the first time the modern purple sleeping cap was seen. While sleeping, Kirby's Air Ride Machine will continue moving forward, but the player will be unable to input any directions, and any other racer that Kirby bumps into while snoozing will also be put to sleep. Mashing the Control Stick will cause Kirby to wake up faster.

There is a Checklist objective that requires the player to finish a race in first place in Air Ride while using the Sleep ability. This is most easily accomplished on Fantasy Meadows by using a Mix.

Sleep appears as an ability in Kirby & The Amazing Mirror and Kirby: Squeak Squad, functioning identically to the way it does in Kirby: Nightmare in Dream Land.

In Kirby: Squeak Squad, an Ability Scroll can be acquired for Sleep which allows Kirby to recover a little health while snoozing, giving Sleep a beneficial attribute for the first time in the series.

In Kirby's Return to Dream Land and subsequent main-series titles up to Kirby's Return to Dream Land Deluxe (but excluding Kirby and the Forgotten Land), Sleep appears as a regular ability provided by Noddy. In all of these games, while Kirby is snoozing, the player can mash directions (or shake the controller where applicable) to cause a nose bubble to grow in size on Kirby's face. If that bubble pops, Kirby will wake up earlier than he otherwise would have. The pop also deals damage to enemies and breaks blocks within range.

In Kirby Star Allies, there is a special action referred to as "Friend Wake-Up Call", which involves a Friend popping the nose bubble while Kirby is sleeping to wake him up early.

Having won the second Copy Ability poll, Sleep was added to the roster of battle abilities. As such, this appearance is the first to give Sleep Kirby a proper fighting move-set.

Attacks include hitting opponents with a pillow, blowing huge bubbles, and putting opponents to sleep by placing a cap on their heads. Sleep Kirby wobbles when he moves like he's sleepwalking, and when holding still, will dream of cake, slowly recovering HP in the process.

Being a downloadable ability, Sleep does not have any alternate Headgear, nor can it be used in Dedede's Cake Royale.

While Sleep is not an ability in Super Kirby Clash, two stickers depicting Sleep Kirby are available for use. One of them uses the LINE artwork, while the other depicts Kirby sleeping next to a sleeping Waddle Dee, taken from Kirby no Copy-toru!.

Sleep returns as an ability in Kirby and the Forgotten Land, but it behaves slightly differently than to previous appearances. Here, when Kirby gains the ability, the player can still control him to a limited extent for a moment: Kirby becomes drowsy and can only walk slowly, becoming slower and slower until he nods off, at which point the ability behaves as usual. However, unlike most previous games, sleeping will gradually heal health as Kirby sleeps, healing up to half a full health bar (12.5% times 4). There is also an Evolved Copy Ability based on Sleep called Deep Sleep. It allows Kirby to sleep in a bed, which fully heals him as he sleeps and gives him a random temporary bonus upon waking up, equivalent to the "Life Up", "Attack Boost", or "Speed Boost" items. Unlike Sleep, Deep Sleep allows the player to choose when to sleep, by pressing the B button, rather than it being automatic. It also doesn't restrict Kirby's movement in any way, and the bed even deals a small amount of damage to enemies colliding with it when it appears.

It is also worth noting that the bubble that Kirby blows in his sleep now properly comes from his mouth, as opposed to coming from his nonexistent nose in previous games.

While the Sleep Copy Ability does not appear in the anime series Kirby: Right Back at Ya!, something comparable does happen when Kirby inhales a Noddy in the episode Flower Power. He is put into a coma, and cannot be roused until he smells the pollen of the Pukey Flower. Despite being similar in most aspects to the Sleep Copy Ability, this instance should not be confused as such, since there is no transformation sequence, Kirby does not gain a hat, and none of the characters refer to it as an ability.