Kirby's Avalanche, known as Kirby's Ghost Trap in European languages, is a puzzle game developed by Compile, in collaboration with HAL Laboratory, that was released in 1995. It is a spinoff title and a direct modification of the Japanese puzzle game Super Puyo Puyo, except featuring Kirby characters. The game, which can be played with one or two players, revolves around stacking multi-colored blobs (otherwise known as Puyos) and matching chains of the same color. Due to its similarities to Super Puyo Puyo, this game was never released in Japan, making it the only Kirby game with this distinction. 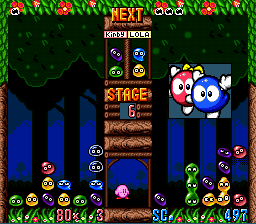 This game plays identically to Super Puyo Puyo, and as such, the rules in Kirby's Avalanche are the same. Two players each have their own playing field, a grid of 72 spaces (6 across and 12 high). Pairs of differently-colored Puyos (referred to in this game as blobs) fall from the top of the playing field and eventually touch the bottom. The goal is to drop and rotate the Puyos in such a way that four or more of the same color connect and touch each other from above, below or to the side, in any combination. This done, they will disappear from the playing field. Any Puyos above them will fall down and fill in the spots where the matched Puyos once were. If a player runs out of room in the playing field to place Puyos, that player will lose the game.

Clearing Puyos will send Garbage Puyos (referred to in this game as boulders) to the opponent's playing field. Garbage Puyos cannot be cleared when four or more of them touch, and can only disappear if a match of four colored Puyos is accomplished right next to them. Because of this, they are essentially meant to waste space and make matching Puyos more difficult.

It is possible to set up a chain reaction by matching four Puyos, and then letting other Puyos fall into spots where they will connect with more Puyos, clearing more of them one after another in succession. The more Puyos that disappear from the result of a chain reaction, the more Garbage Puyos will be sent to the opponent's playing field. Setting up a large enough chain will create the eponymous "avalanche"; so many Garbage Puyos will be dropped that the opponent has no chance to recover.

Some techniques found in later games of the Puyo Puyo series are not possible to perform in this game, such as "offsetting" (neutralizing Garbage Puyos by matching Puyos before they fall) or "double-rotation" (rotating Puyos vertically when trapped in-between columns of other Puyos).

There are four options on the main menu for Kirby's Avalanche: "Competition", "1P vs. 2P", "Practice", and "Options".

During the Competition mode of the game, Kirby faces a total of 16 bosses in the order presented. These bosses do not possess any special skills (other than minor aesthetic differences), but their playing styles vary slightly, generally becoming faster and more aggressive as Kirby advances through the game. Each opponent is equivalent to another opponent from Puyo Puyo, including their specific playstyle quirks.

Notably, in the cutscenes between each round, Kirby is shown trash-talking his opponents and speaking in full sentences. This is a very unique and strange occurrence; in most of the rest of the Kirby series, Kirby is not rude, and has rarely spoken outside of simple phrases, such as "hi". Instead, his behavior is more in line with the personality of Puyo Puyo's protagonist, Arle Nadja, who is replaced by Kirby in this game. As such, the game's storyline does not fall into the canon, and certainly does not reflect Kirby as a character in the main series.

There are three difficulty levels to Competition mode: Easy (otherwise referred to as the Learning Stage), Normal, and Hard. Waddle Dee, Bronto Burt and Waddle Doo are exclusive to the Learning Stage (and are the only opponents fought in that mode), while Poppy Bros. Sr., Whispy Woods and Kabu are exclusive to the Normal setting. Individual battles are referred to as Stages, or "Lessons" in the case of the first three opponents.

When Waddle Doo is defeated, King Dedede congratulates the player on their skill in the Learning Stage, then challenges them to try a higher difficulty. The high score table will be shown, and if the player got a high score, they will be prompted to input their initials. The game then returns to the title screen.

When King Dedede is defeated, the game displays a short ending cutscene, then the names of each of the characters, followed by the staff credits. If cleared with the COM Level set to Easy, Normal or Hard, the final message encourages the player to try the next COM Level, while if cleared on Hardest, the final message is a simple thanks for playing. Regardless of difficulty, at the end of the credits, a special code is revealed; holding A, B, X, and Y on the second controller during gameplay, then resetting the console with these buttons held, will unlock a special "custom" menu in the options. The best scores will then be shown; if the player got a high score, they will be prompted to input their initials. That done, the game returns to the title screen.

1P vs. 2P is the game's multiplayer mode, and requires two controllers to operate. Two players compete in a match of Avalanche. Player 1 will always be Kirby, while player 2 can be any of the opponents from Competition mode, selected at random. At the start of a match, each player can individually select their difficulty level on a scale from 1 to 5, which is represented by chili peppers: Mild, Medium, Spicy, Hot, and Cajun. This is another holdover from Puyo Puyo, in which protagonist Arle's favorite food is curry. The difficulty level affects how fast the player's Puyos fall, thus affecting reaction time. The number of rounds in each match can be adjusted through the Options menu. When a match is done, the game returns to the difficulty select.

Practice mode allows the player to play a single round of Avalanche without having to compete against an opponent. The goal is instead to last as long as possible and rack up a high score. Like 1P vs. 2P, the player can select their starting difficulty speed, with a choice between Mild, Spicy (which adds 40,000 points to the score), and Cajun (which adds 90,000 points to the score). Player 2 can join as well, though there is no incentive to compete other than for score, as Garbage Puyos do not appear. When both players receive a game over, the best scores are shown; if either got a high score, they will be prompted to input their initials. The game then returns to the title screen.

Options mode allows the player to adjust the game settings in the various modes, as outlined below. This also includes the sound test option to listen to the game's music and sound effects, and the input test option to ensure that the controllers' buttons are functioning properly. As mentioned above, some options are only available after entering a special code.

There are also further, unused special options that can only be accessed through a game-altering device, such as a GameShark. One of these options is an early form of the "offsetting" rule.[2]

The following is a list of staff who have worked on Kirby's Avalanche:

Everyone's favorite round, pink hero takes a break from swallowing his enemies to put your brain to work in this fast-paced puzzle game. Players take control of Kirby and match wits with well-known enemies from the Kirby series (including his archrival, King Dedede!) in an effort to win the First Annual Dream Land Avalanche Competition. This simple-but-addictive gameplay revolves around brightly colored blobs and boulders. When the right amount of matching blobs are stacked, they explode and rain down boulders on your opponent's field of play! Keep going until your screen is clear to move on to the next round. But be careful—the farther you advance, the faster the blobs fall, and the smarter the opponents get! Are you good enough to help Kirby become the avalanche king?