The Air Riders are a collection of soldiers who fight for Night Mare Enterprises by riding Air Ride Machines and wielding various weapons. They are sent after Kirby and his friends when they infiltrate eNeMeE's Fortress in Fright to the Finish, but they are first engaged in a dream battle that Kabu offers Kirby and Tiff in order to prepare them in Air-Ride-in-Style - Part I and Part II. Meta Knight explains that they are not monsters, but they are battled in a similar way regardless.

The Air Riders are small round creatures with anatomy similar to Kirby - though with short arms and gloves - who wear gray jumpsuits with black visors on the front. The only thing that distinguishes them visibly are the weapons they carry, the color of their gloves, and the letter on their foreheads which signify the Air Ride Machine they pilot:

They do not have dialogue, but in the Japanese version, they can be heard vocalizing when they are being defeated by Kirby.

Which Copy Abilities they can provide depends on the weapons they are using. These consist of the following: 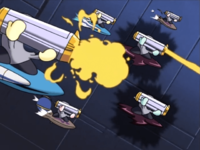 Several Air Riders attacking Kirby in Fright to the Finish

The Air Riders first appear in Air-Ride-in-Style - Part I and Part II, where Kirby is forced to battle four of them, each carrying unique weapons and riding a different Air Ride Machine. Kirby faces them down one-by-one by copying or countering their abilities and then mounting their respective vehicles. It is later revealed however that this entire battle sequence was a dream implanted in Kirby's head by Kabu in order to mentally prepare him to use Air Ride Machines later.

In the episode Fright to the Finish, Kirby encounters his first real Air Riders who attack him using missile launchers and flamethrowers. Using the dream training he received, Kirby quickly counters their attacks and rides their vehicles in order to defeat them and then pursue eNeMeE.