An Ability Item[1] is a special representative object which can be inhaled for a Copy Ability, which appears in Kirby Super Star, Kirby Super Star Ultra, Kirby Star Allies, and Kirby and the Forgotten Land. In those first two games, Kirby can create these items by discarding his currently-equipped ability while a helper is on screen, or if he uses the Normal Beam on his helper. In Kirby Star Allies, these items are mainly created by defeating the appropriate enemy with the Friend Star or by defeating a Mid-Boss. In Kirby and the Forgotten Land, these items take the place of Ability Stars.

Ability Items are created in different ways depending on the game, as follows: 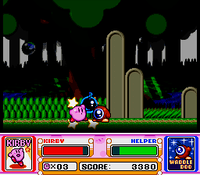 An Ability Item acts like most other items in Kirby Super Star and Kirby Super Star Ultra, in that it does not move of its own accord and will fall to the nearest available floor. Unlike most items, however, it will not automatically activate when Kirby touches it. Instead, it must be inhaled and swallowed to activate. The Ability Item can also be spat out as a Star Bullet, but it cannot be recovered afterward if used in this way. Additionally, if an Ability Item is left behind or left alone long enough, it will disappear, unlike other items.

Much like with Copy Essences, if a helper touches an Ability Item, it will automatically change into the corresponding helper for that item, and have its health fully restored. Transforming a helper with no health left into an item and then re-summoning it can be a useful method of saving the helper before it bursts out of existence.

Abilities that do not have items include: Cook, Crash, Mike, Paint, Sleep, Starship, and Wheelie Rider. 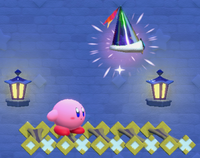 Kirby standing next to a Bomb Ability Item in Kirby Star Allies.

In Kirby Star Allies, there is an Ability Item which corresponds to every standard Copy Ability in the game. Instead of taking on the form of a representative object, the item resembles the corresponding hat which Kirby wears. Unlike in Kirby Super Star and its remake, Ability Items in this game float in the air for a moment after they are created, and then slowly drop back down. They then disappear after a few moments if not interacted with. If Kirby touches or inhales an Ability Item, he will obtain that ability. If he tosses a Friend Heart at it, the item will be made into an ally (assuming a corresponding ally exists for that Ability Item). If a non-Dream Friend ally touches an Ability Item that can be made into an ally, they will be turned into the ally corresponding to the item touched if the original ally and item differ in ability (otherwise, nothing happens). This cannot happen to the P1 character in Guest Star ???? Star Allies Go!, even if they are a non-Dream Friend.

In Kirby and the Forgotten Land, Ability Items take the form of hats or weapons inside bubbles. They stay in place after appearing, slowly drifting to the ground if created in the air, and will vanish after a short time. Similar to Kirby Star Allies, Mid-Bosses will drop their corresponding Ability Item upon defeat. Like Ability Stars, Kirby can inhale these and spit them out as Star Bullets, or swallow them to gain the ability.

When Kirby has an Evolved Copy Ability set, all Ability Items corresponding to it will have the appropriate evolved ability hat/item inside.