This article is about Kirby's house in Dream Land. For Kirby's apartment room in Kirby's Epic Yarn, see Kirby's Pad.

Kirby's house is a minor location in Dream Land. As the name implies, it is Kirby's place of residence, and where he goes to sleep at night. It was first seen in full in the manual for Kirby's Dream Course, and has since made only a few appearances in the game series, being much more prominent instead in the anime - Kirby: Right Back at Ya!.

Kirby's house is a fairly small white dome-shaped hovel, consisting only of a single room topped with a chimney, at least one window, and a door. The window has no glass in it (instead only consisting of a wooden frame) and the dome itself appears to be made out of stone or clay. Outside the house is a small sign with some stars on it, which presumably mark the building as Kirby's. Despite having this home, Kirby is content to have meals and sleep wherever he pleases outside, at least during the day.

According to an official Japanese profile written to tie in with Kirby 64: The Crystal Shards, Kirby's house was built for him by the residents of Dream Land after he recovered their stolen food from King Dedede in Kirby's Dream Land.[1] Inside the house, there is not much in the way of furniture or other belongings. The only notable furnishings are a bed, a fireplace, and a chabudai (a kind of Japanese tea table). Kirby also probably keeps his green Sleeping cap in here. According to an official Japanese-exclusive guidebook for Kirby's Dream Land 3, Gooey also lives in Kirby's house.[2]

Kirby is seen waking from his bed in his house in the manual for Kirby's Adventure, but his house is never seen from the outside. In both the original game and Kirby: Nightmare in Dream Land, this scene is also shown as an illustration accompanying the title screen prologue.

In Kirby: Nightmare in Dream Land, Kirby's house is shown directly as another illustration in the prologue. 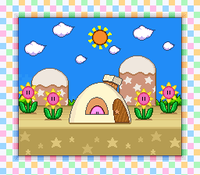 A screenshot of Kirby's house from the Japanese-exclusive intro cutscene.

Kirby's house appears in the game's manual and in the Japanese-exclusive opening cutscene. Its basic design was established here, and has remained relatively unchanged since.

At the beginning of the credits sequence after completing Milky Way Wishes, Kirby can be seen sleeping in his house.

Kirby's house appears in the opening scene of Kirby's Star Stacker, with smoke coming out of its chimney. Kirby emerges from behind his house riding on a Warp Star before leading to the title screen proper.

At the very end of the game, Kirby can be seen waving from his house's window. When playing in the normal mode, it is on this screen where the player is informed on whether or not they can play the Extra Stage if they collected all 32 Red Stars beforehand.

Kirby's house appears at several points in the introductory cutscene. It is lifted into the air by the Dreamstalk once it starts growing, prompting Kirby to begin his adventure into Floralia. Once the game is over, Kirby's house can be seen at the end of the credits sequence, back on ground level. 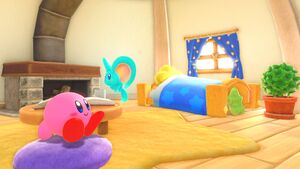 A replica of Kirby's house appears in Waddle Dee Town in Kirby and the Forgotten Land. It requires 50 rescued Waddle Dees to build. This is the first time the interior of the house can be fully explored in a game, and what is seen of it largely matches its appearance in Kirby: Triple Deluxe. As Kirby progresses through the game, up to ten photos commemorating his achievements will appear on the walls which can be viewed, and the house can be decorated using up to three figures collected from capsules in stages and in the Gotcha Machine Alley.

Using the bed, Kirby and Bandana Waddle Dee can recover all of their health, and a book beside a small cup can be found on a table which contains information about previous Kirby games. Lastly, the fireplace can be lit using a Fire-based ability, awarding 10 Star Coins once per game load, and the house can be entered through the chimney if Kirby jumps on top of it. 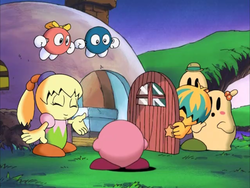 Kirby being shown into his new house by his close friends.

In the anime series, the residents of Cappy Town build Kirby a home to give him a permanent place to stay in Dream Land (and so he doesn't have to live with any of them). Kirby ends up sharing this home with Tokkori, who often takes control of the place, prompting Kirby to sleep in the nearby tree instead. Kirby's home is frequently destroyed during the show, but is always rebuilt in time for the next calamity.

In the anime, Kirby's house is reasonably furnished compared to the game series. It has drawers, lights, carpets and a television set.