This article is about the Copy Ability. For other uses of "Mirror" and mirror-related objects and beings, see Mirror (disambiguation).

Mirror is a Copy Ability which allows Kirby to project mirror images of himself, attack with magical glass-like projectiles, and reflect attacks back at his enemies. The Mirror ability first appeared in Kirby Super Star and is obtained primarily by swallowing Simirror. The hat for Mirror Kirby originally resembled that of the Beam ability, though with a red and blue color scheme and stars on both sides of the hat (though the red side of the hat is starless in-game). It was updated to its modern design in Kirby: Planet Robobot, changing the look and color of the hat and giving Kirby a more distinctive magic rod. 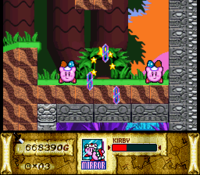 Mirror is among the more enigmatic and rare abilities in Kirby's arsenal, having only four proper game appearances and only one dedicated provider (Simirror). While Kirby has this ability, his dash is replaced with a magical smooth sliding motion where Kirby moves forward in a static pose without moving his feet. Mirror Kirby's primary attack involves him swiping with his scepter and then creating a magic barrier while throwing out elongated diamond-shaped projectiles. While this barrier is up, any projectiles thrown at Kirby will be reflected back, potentially hitting the enemy who threw them. This reflection property also applies to Mirror Kirby's special bubble shield raised when he is guarding. Mirror Kirby also gains an attack called "Mirror Body", which allows him to throw out mirror images of himself. In Kirby Super Star and Kirby Super Star Ultra, there is only one form of this attack, involving Kirby reflecting into two copies and flying outward on a line, then coming back. Additional forms were added in Kirby: Planet Robobot, allowing Kirby to create a ring of duplicate images or a string of upward-traveling ones.

Mirror Kirby has limited utility for solving puzzles in Kirby Super Star and its remake, since there are no dedicated situations that require reflecting projectiles. However, many of his attacks can strike objects through walls, though using Mirror Body for this can be tricky, and there are better choices for this task. In Kirby: Planet Robobot, Mirror gains some additional use due to there being a handful of puzzles that require reflecting projectiles to solve. In this game specifically, Kirby can also reflect projectiles tossed at him from a different plane, allowing him to counterattack enemies without having to use a 3D Warp Star to get to them first.

Mirror makes its debut appearance in Kirby Super Star, and also appears in its remake Kirby Super Star Ultra. The ability is obtained by inhaling the enemy Simirror, grabbing the appropriate Copy Essence, or through a Mix, though it can also be equipped in Milky Way Wishes through Copy Essence Deluxe. With Mirror equipped, Kirby can create Simirror as a helper. Kirby's visual appearance changes by becoming a lighter color and wearing a jester-style cap similar to Marx's hat.

While Mirror does not appear as a Copy Ability in Kirby: Triple Deluxe, a keychain depicting Mirror Kirby from Kirby Super Star can be collected.

After a long absence, Mirror returns in its first 3D iteration in Kirby: Planet Robobot, with the hat receiving a redesign to further distinguish it from Beam's hat. It is once again obtained from Simirror, and retains most of its functionality from Kirby Super Star, but also receives some upgrades. Two new moves allow Kirby to make multiple copies of himself in a large spread attack or a vertical strike, and all moves are now also able to reflect projectiles back to enemies on different planes. To compensate for these additions, the shield for Reflect Guard is not permanent as it is in Kirby Super Star.

While Mirror was not included among the initial roster of Copy Abilities for Kirby Battle Royale, a Copy Ability Poll was held on the various websites for the game, to determine which additional abilities the fans wanted to be added into the game. The Mirror ability won the first poll, and shortly after, it was confirmed that the ability would be added into the game as free downloadable content.

The Mirror ability was added into the game on December 13th, 2017, pre-dating Kirby Battle Royale's release in North America by over a month. Due to its late inclusion as a downloadable ability, it cannot be used in Dedede's Cake Royale, there are no pieces of alternate Headgear to unlock for it, and no medal objectives involve it specifically.

Mirror Kirby's moveset in this game is very simplified, but it retains its core properties and distinct dash animation. Mirror Kirby can use Reflect Force to deflect enemy projectiles, and has two different variations of Mirror Body to go on the offensive with. Mirror Body - Spin has him splitting into six copies and then spinning them together as a circle as they travel in any direction.

Mirror does not appear as a Copy Ability in Kirby's Dream Buffet. However, a Character Treat depicting Mirror Kirby can be collected, using his art from Kirby Super Star.

The Mirror ability makes two appearances in the anime series Kirby: Right Back at Ya!, in the episodes One Crazy Knight and Buccaneer Birdy. Mirror Kirby operates largely the same in the anime as he does in the games, though his ability to make mirror copies of himself is greatly increased in potency.

Notably, Mirror Kirby uses the exact same strategy in both of his appearances to defeat the Windwhipper and the Mole Monster. He starts by using his Reflect Guard to block an attack. Then he uses his Mirror Body to create clones of himself that dance around the monster, confusing it. After the mirror copies converge above the monster's head, Mirror Kirby finishes it off using a Mirror Cut to slice the monster clean in half.