Pyribbit is a boss first confronted in Kirby: Triple Deluxe. He is a massive ovaloid pyroclastic frog with a small tail who is often referred to as the "Volcano Lord". He resembles a giant horned toad, though he bears a crown and has no arms. His crown appears to be a smoldering caldera, out of which magma and igneous boulders can be spewed. He can also swim and survive in lava and breathe fire, along with having the ability to cause tremors and summon lava waves.

His English name is a portmanteau of the words 'pyro' (a Greek prefix for fire) and 'ribbit' (an onomatopoeia for a frog’s croak). This reflects the fact that the boss is a fire-breathing toad.

Pyribbit is the boss of Kirby: Triple Deluxe's fifth Level, Endless Explosions, and is also battled in Royal Road Stage 4 and in The Arena.

Pyribbit makes his first appearance when Kirby enters the boss door of Endless Explosions. After he makes his way inside, Kirby sees the giant frog-like monster sleeping. Taranza then throws a rock at Pyribbit, waking him up. Kirby catches the rock in his hands as it bounces back at him. However, Pyribbit assumes Kirby woke him from his slumber since the puffball is holding the rock, and they face off. In Dededetour!, Pyribbit is angered when King Dedede trips and accidentally tosses his hammer into the giant toad's face.

The following lists all of Pyribbit's attacks in Story Mode and The Arena in Kirby: Triple Deluxe. Attacks in italics are used in the second phase of the fight only.

Pyribbit spends most of his time off the stage, which can make him difficult to hit. As such, his fight tends to last longer than the prior bosses' fights. In his second phase, Pyribbit summons four stone platforms out of the lava that float in the air, and a volcano in the background. These become fixtures for Pyribbit to perform more attacks from.

Upon defeat, Pyribbit gets knocked into the background lava pit, where he then surfaces and starts roaring. The pillars the boss summoned during his second phase then inexplicably fly in toward the crying toad and crash into him, burying him beneath the surface of the lava and destroying him. The Grand Sun Stone then emerges from above for Kirby to collect. 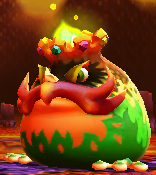 Pyribbit DX is a stronger version of Pyribbit who is fought in Dededetour! by King Dedede and in The True Arena by Kirby. He has a green body, a pink mustache, and a green flame lit on his crown instead of a regular flame.

The following lists all of Pyribbit DX's attacks in Dededetour! and The True Arena in Kirby: Triple Deluxe. Attacks in italics are used in the second phase of the fight only. Note that the attack names are conjectural: 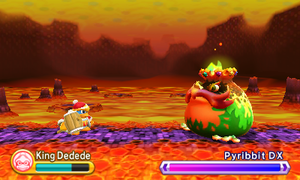 In phase one of Lvl. 5 of Dededetour! and The True Arena, Pyribbit DX attacks in a fixed loop as follows:

In phase two, he attacks in a fixed order on loop as follows:

In phase one for the lvl. 6 rematch in Dededetour!, Pyribbit DX starts with these attacks:

In phase two, Pyribbit DX starts with these attacks:

In Kirby: Planet Robobot, Pyribbit appears as the fourth boss of the Sub-Game, Team Kirby Clash. He fights in almost exactly the same manner as he did in Kirby: Triple Deluxe, but his health is much greater to serve as a challenge for four Kirby warriors. 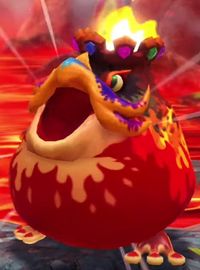 Pyribbit as he appears in Super Kirby Clash.

Pyribbit is encountered twice in Team Kirby Clash Deluxe and four more times in Super Kirby Clash. He fights faithfully to his original Kirby: Triple Deluxe incarnation in these fights, though some of his background moves have been toned down. He is exclusively fought in the Volcano region, where he can take advantage of the background props.

The following lists all of Pyribbit and Pyribbit EX's attacks in Team Kirby Clash Deluxe and Super Kirby Clash: