Tac (also referred to as T.A.C.) is an enemy in Kirby Super Star and its remake. He can empower Kirby with the "Copy" Copy Ability when inhaled. Tac's appearance consists of a dark blue robe with a green bag with a wind-like lines to steal Helpers or Copy Abilities. He has cat ears and visible eyes, but it is unknown what the rest of his face looks like. In Helper to Hero, Tac appears to have a middle tan, white clothing, and a red bag. In Kirby Super Star and its remake, Tac can be used as a Helper by discarding the Copy Ability and is also playable in Helper to Hero.

Tac's name spelled backwards is "cat", referring to both a copycat and a cat burglar, which also fits his appearance. 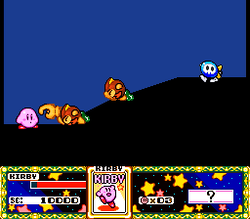 Kirby being assaulted by two Tacs on Planet ??? in Milky Way Wishes.

Tac appears as a common enemy in this game, who mainly attacks by running up to Kirby and attempting to steal his ability if he has one. Tac is able to run very quickly, making it easy for him to get away after stealing an ability, though it is easily thwarted by tricky terrain. It may also often be the case that Tac steals Kirby's ability, and then immediately falls into a bottomless pit, thus making the ability irretrievable. In addition, Tac is capable of stealing Kirby's Helper if the Helper is controlled by the CPU.

Compared to the Copy ability Kirby can use, Tac as a helper has a lot of unique attacks, which can be used to damage foes directly. He can also utilize a special Guard that makes him completely intangible. When guarding, only his face and ears are visible. 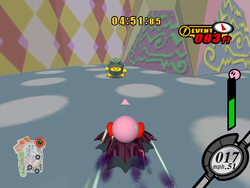 Tac appears as part of a random event in the City Trial mode. Here, he appears in a number of set locations, usually underground, and runs about at random. When he appears, the Kirbys are tasked to find him and smack into him with their vehicles to cause him to drop items he'd 'stolen'. Once enough time passes, or enough items are dropped, Tac takes off using some sort of jet-pack, sometimes dropping more items as he does so.

Tac makes an appearance in the Kirby Mass Attack Sub-Game Kirby Brawlball. Here, it occupies the top of the main pinball board and will occasionally steal items that happen nearby.

In Kirby: Triple Deluxe, Tac appears as one of the randomly-obtained keychains, depicting him as his sprite from Kirby Super Star.

In Kirby: Planet Robobot, Tac appears as one of the randomly-obtained stickers, using his artwork from Kirby Super Star.

In Kirby's Dream Buffet, Tac appears as one of the randomly-obtained Character Treats, depicting him as his sprite from Kirby Super Star.

Tacs appear as an enemy in both Smash Run for the 3DS version, and Smash Tour for the Wii U version.

In Smash Run, he functions much like he does in Kirby Super Star, this time stealing stat boosts from players instead of Copy Abilities. Defeating him before he flees the scene gives back all the stat boosts he has stolen from a player.

In Smash Tour, he sometimes appears on the game board and award multiple stat boosts if a player manages to catch one.