Gooey is one of Kirby's friends who appears primarily in Kirby's Dream Land 3, though he was first introduced in Kirby's Dream Land 2. He is a blue (sometimes purple or black) blob with a face and a long tongue. While he does not have any additional limbs, he can use his tongue to grab onto things, and stretch parts of his "body" to use as makeshift limbs when necessary. Gooey is the same species as Dark Matter, but unlike most Dark Matter, he has a friendly personality and no ill will. His appearance in Kirby Star Allies indicates that, though he is capable of speech, he knows little about himself or his identity.

Like Kirby, he can use Copy Abilities, but uses his tongue to grab enemies rather than inhaling them. Besides this, he has all of the same abilities as Kirby. In certain circumstances, he can also fly by becoming Mock Matter, which gives him orange petals more similar to the rest of his species. He originally appeared as a non-playable character in Kirby's Dream Land 2, but he is playable in Kirby's Dream Land 3 using a second controller, otherwise appearing as a CPU-controlled companion. Apart from this, he appears in Kirby Star Allies as a Dream Friend, and Kirby Fighters 2 as a Buddy, while making other smaller appearances elsewhere in the Kirby series. He has also made a few minor appearances in the Super Smash Bros. series.

Prior to Gooey's name being officially recognized in the west, he was generically referred to as a blob character[1], and in the non-Japanese versions of Kirby's Dream Land 2, he has a female counterpart known as the Girl blob. 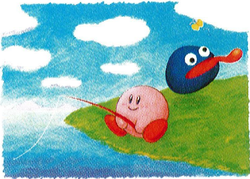 Despite being even more simplistic-looking than Kirby, Gooey has a very distinct personality which is portrayed through his expressions and actions. His body is little more than a loose deep-blue blob, which he shifts in a sort of gallop in order to bound around quite quickly, matching Kirby's pace. His eyes are wide and round with small pupils, and continuously spin asynchronously to each-other, suggesting that Gooey is constantly dizzy or disoriented. His mouth is typically a wide closed smile, though he frequently opens up to lasso some food or an enemy with his long Whip-like tongue. Much like Kirby, Gooey is capable of spitting out his foes as Star Bullets, swallowing them to gain their powers, and hovering through the air. He can also pair up with Animal Friends in the same way as Kirby. In addition, Gooey can take flight using his "Mock Matter" form, where he more greatly resembles Dark Matter, and can even fire Dark Lasers.

Gooey can generally be described as naïve and child-like; even more so than Kirby. Cutscenes in Kirby's Dream Land 3 suggest he has an insatiable appetite with little self-control, and is overly curious with his tongue, to the point where he once gets on ChuChu's nerves. Gooey can also be generally described as having a somewhat detached attitude from the world around him, as he is not typically phased by things that happen to him, and is not really inclined to understand much of anything about himself or his world, mainly acting on instinct. Despite this, he is generally good-natured, and follows Kirby's lead in saving Popstar.

Gooey makes his first appearance in Kirby's Dream Land 2, where he can emerge from the Protective Bags guarded by mid-bosses if Kirby already has the particular Animal Friend meant to come out from there. Acting as a collectible item instead of a helper, Gooey restores one full unit to Kirby's health meter when picked up, and needs to be picked up at least once in order for the game to be considered 100% complete. Gooey also appears in the Sound Test illustration. 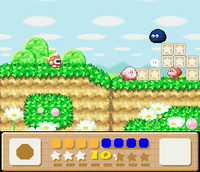 In Kirby's Dream Land 3, Gooey can be called by pressing the "A" button in exchange for a full unit of Kirby's health and is playable by a second player or the CPU, possessing four bars of health separate from Kirby's. Gooey can grab enemies with his long tongue, spit them out as a Star Bullet or swallow them to potentially gain a Copy Ability. He can also do this underwater, allowing him to attack without using the Water Gun. The only trade-off is that he cannot eat more than one enemy at a time. Gooey can also hover and slide or use an Air Bullet to attack enemies like Kirby. Kirby can inhale and swallow Gooey anytime to restore a full unit of health, which will also give Kirby any Copy Ability that Gooey may have had. Doing so removes him from the game until he is called again. Gooey is also eliminated if he runs out of health or if the player who leads him (player 1 if Gooey is controlled by the CPU) repeatedly presses the "A" button, but no health is restored to Kirby by using this method.

In Kirby: Planet Robobot, Gooey appears as one of the randomly-appearing stickers in the game, using artwork from Kirby's Dream Land 3.

Gooey using his "Dark Laser" to solve a puzzle in Heroes in Another Dimension in Kirby Star Allies.

Gooey appears as a Dream Friend in Kirby Star Allies, added into the game in version 2.0.0 on March 28th, 2018. He fights with his tongue, which can be used like a Whip and can also provide the Splash effect to his allies' weapons. He can also use a number of other techniques based on his abilities from Kirby's Dream Land 3, including his Burning move which can provide Sizzle and his Stone form which can be utilized in Friend Abilities like Curling. Lastly, Gooey is capable of turning into his 'Mock Matter' form and firing dark lasers and is also capable of using Friend Throw.

Like the other friends, Gooey has his own mode in Guest Star ???? Star Allies Go!, which incorporates some unique stage designs reminiscent of areas from Kirby's Dream Land 3, along with some more original areas that play to his moveset. He can also be selected in The Ultimate Choice and has a role in Heroes in Another Dimension. Gooey has slightly lower health than Kirby and most other Dream Friends, referencing how summoning him in Kirby's Dream Land 3 required removing a bar of Kirby's health.

Gooey makes a cameo appearance in Super Kirby Clash, appearing in the Castle Village behind the Gem Apple Tree after the "Toughest: Venom Kracko" Story Quest is cleared. Gooey also appears as one of the game's stickers.

Gooey appears as a playable character in Kirby Fighters 2, and is unlocked after attaining Fighters Rank 3. His move-set is largely the same as it is in Kirby Star Allies, though with modified damage values. One of the Story Items in Story Mode: The Destined Rivals (the "Gooey Badge") allows the player to deal three times the normal damage to any Gooey opponents when equipped.

In Kirby's Dream Buffet, Gooey is available as an unlockable costume for Kirby, and a color based on him is also available. The costume consists of Gooey riding atop Kirby's head, and it appears that it is in fact Gooey himself, rather than a prop, since the "hat" moves its tongue around and has the same dizzy eyes. Gooey also appears on a Character Treat, depicting his artwork from Kirby's Dream Land 3.

Gooey appears as a trophy in Super Smash Bros. Melee.

Gooey appears as a neutral type primary spirit in Super Smash Bros. Ultimate. He can be obtained either by battling him in the Spirit Board or by purchasing him from the vault shop. His Spirit Battle pits the player against a Kirby with the eighth color palette on the Dream Land stage, with a time limit of 2:00 and the condition that the enemy will tend to favor his neutral special.