Doctor Moro (pronounced 'more-oh' in the 4Kids version) is a mad-scientist monster who appears in the Kirby: Right Back at Ya! episodes Fossil Fools - Part I and Part II. His specialty is in genetic engineering, and using his laboratory and equipment, he is able to create giant Chimera Dinosaurs in mere moments using the DNA of other creatures and characters. By using King Dedede, Tiff, and others as unwitting pawns in his research, Doctor Moro ends up creating a hybrid of Kirby - which he proclaims to be his magnum opus - and nearly succeeds in wiping out the pink Star Warrior, but is foiled when Kirby gains and uses the Crash Copy Ability, destroying him and all of his dinosaurs.

Doctor Moro is a small elderly man who appears at first to be the same species as Tiff and her family, having similar anatomy to them, though his skin has a complexion more similar to that of the Cappies. He sports very thick long gray hair, as well as a bushy mustache that covers his nose and upper lip and stretches up his cheeks to his bangs, making him look somewhat like a dog. He wears large square glasses which obscure his eyes, and wears a formal white lab coat with a single button and a red tie and white shirt underneath.

Doctor Moro is highly intelligent, and an expert in the field of genetic engineering. Using his laboratory and equipment, he is able to create monstrous dinosaur-hybrids and rear them to maturity in mere moments. He is also highly skilled in the art of deception, as he is able to manipulate King Dedede, Tiff, and other characters into helping him toward his nefarious ends. Once his plans are set in motion and he no longer needs to fool them, Doctor Moro transforms into a more monstrous version of himself: his hair stretches upward and becomes spiky, and he grows fangs and claws. Despite this transformation, Doctor Moro does not engage in direct combat at any point.

Role in Fossil Fools - Parts I and II[edit] 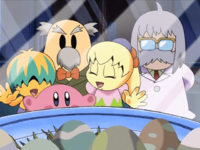 Doctor Moro first appears in Fossil Fools - Part I, being called in through Night Mare Enterprises by King Dedede in order to help him make real living dinosaurs. After securing King Dedede's support in building him a laboratory, Doctor Moro then approaches Tiff, Tuff, Professor Curio, and Kirby and asks them to help him in his research, telling them that he wishes to use genetic engineering to re-create dinosaurs. After securing their support, the team is successful in creating a batch of fertilized dinosaur eggs, but Doctor Moro and the eggs later disappear.

In Part II, it is revealed that Doctor Moro secretly infused the dinosaurs with DNA from King Dedede and Escargoon to create monstrous chimeras of those two, and later steals the genetic material of many other characters to make dinosaur-hybrids of them as well. Eventually, Doctor Moro manages to capture Kirby and steal his DNA in order to make the Kirby-saurus, which he describes as his greatest creation. Doctor Moro then surrounds Kirby and his friends with the Chimera Dinosaurs and nearly succeeds in wiping them out, but King Dedede carelessly tosses a bomb in for the Kirby-saurus to swallow which Kirby himself gets instead. Kirby gains the Crash Copy Ability from this bomb, and uses it to destroy Doctor Moro, all of his dinosaurs, and his laboratory in one great explosion.