This article is about the Copy Ability. For other uses of Jet, see Jet (disambiguation).

Jet is a Copy Ability primarily obtained by inhaling and swallowing one of the Capsule J series of enemies. It allows Kirby to fly at rapid pace in the air, as well as performing various jet-based attacks. Using this ability carefully, Kirby can make rapid progress using sudden bursts of movement while knocking away his foes in the process. He can also perform tackling techniques and light fuses using his jet's exhaust.

When Kirby gains the Jet ability, he is given a blue and white hat which resembles a miniature fighter jet. The "windscreen" of the jet forms a pair of goggles which Kirby can wear while flying, and the engines on back perform the propulsion that Kirby needs when using this ability. The flame from the jet's engines is characteristically blue in color as well.

Jet made its debut in Kirby Super Star where it is obtained from the enemy Capsule J or a Copy Essence Deluxe.

The ability allows Kirby to fly forward and attack with bursts of speed, and also move very quickly upward. The exhaust can also be used to light cannon fuses.

In the remake, Kirby Super Star Ultra, the original enemy/helper Capsule J has been replaced by Capsule J2, but Jet Kirby still functions the same.

Jet does not appear as an ability in Kirby: Triple Deluxe. However, a keychain depicting Jet Kirby can be collected, using his sprite from Kirby Super Star. 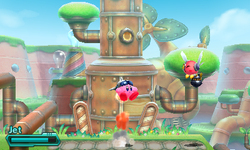 After a long absence from the Kirby series, the Jet ability returns in Kirby: Planet Robobot. It is acquired from the Capsule J3 enemy.

The ability operates in much the same way as in Kirby Super Star and Kirby Super Star Ultra, but has also been granted more attack options. However, many of its moves have been given tweaks to their attacking power and range. The unique Hover the ability has was also changed to rise into the air much faster. Additionally, the Jet Headbutt move can no longer be performed repeatedly to fly forward indefinitely, as Kirby will visibly tire after a few uses, reducing the distance and height he gains from each headbutt until he touches the ground.

Additionally, it is compatible with the Robobot Armor, transforming the Armor into Jet Mode which is required for certain sections of the game.

In this title, the amiibo for Fox and Falco can be used to obtain the Jet ability.

Although Jet is not in Kirby Star Allies as an ability from any enemy, Susie has some moves of the Jet ability in her move-set.

Jet is not an ability in Kirby's Dream Buffet. However, Jet Kirby is depicted on a Character Treat, using his artwork from Kirby Super Star.

The Jet ability makes two appearances in the anime series Kirby: Right Back at Ya!, in the episodes Delivery Dilemma and A Sunsational Puzzle. In both of these episodes, much more focus is placed on Jet Kirby's flying ability than his offensive capabilities. However, he does use the "Jet Cracker" technique to defeat the Delivery Man. In A Sunsational Puzzle, Jet is the first ability Kirby obtains in order to battle the Ozomashii, though he does not accomplish much before the ability is knocked off of him.