Revenge of Meta Knight is the fifth main game in Kirby Super Star and its remake. This game takes a much more serious tone than the other games in the collection, and tasks Kirby with stopping Meta Knight and the Meta-Knights from taking over Dream Land using their giant ominous flying warship, the Halberd. The game is split into seven chapters, and is unique from the other main games in that every stage has to be completed within a time limit.

Most of the game takes place aboard the giant mechanical battleship Halberd and as such, features murky metallic architecture and color themes, along with erratic fast-paced music and giant mechanical Bosses such as Heavy Lobster and the Combo Cannon. Additionally, the game features a real-time dialogue exchange between the crew members of the Halberd, who desperately try and ultimately fail to stop Kirby from destroying their ship, sending it careening into the ocean in a dramatic ending cut-scene. Completing this game will contribute to unlocking Milky Way Wishes. 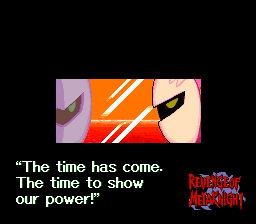 Meta Knight, as seen in the opening scene

Mustering forces and technology hitherto unknown in Dream Land, Meta Knight, his Meta-Knights, and a motley crew of various different types of creature gather and prepare to launch a gigantic flying warship called the Halberd, aided by a Waddle Dee known as Sailor Waddle Dee, and helmed by an anthropomorphic vulture named Captain Vul. Meta Knight believes that Dream Land has become corrupted and slothful, and intends to take the kingdom under his own name. Overhearing this plot, Kirby sets out with nothing but a Warp Star to try and stop it. He approaches the ship's deck just as it is preparing to take off, and lands with the intent to board the ship. Meta Knight and Vul order their crew to dispose of Kirby with the utmost haste as the pink spud makes his way to the back thrusters of the ship. There, a crustaceous robot called Heavy Lobster is dispatched to slow Kirby down, giving the Halberd crew just enough time to take off, blowing Kirby (and Heavy Lobster) off the dock and into the nearby ocean.

After Kirby climbs onto a remote island, he moves quickly to try and find a way to pursue the Halberd as it flies off to conquer Dream Land, starting with Grape Garden. He stumbles into a fight with Whispy Woods, and then Twin Woods, defeating them as quickly as he can. This done, Kirby acquires another Warp Star and takes off after the Halberd again, but he is shot out of the sky by the Halberd's main cannon, sending him careening into a forest near Candy Mountain. Still undeterred, Kirby worms his way out of the woods and climbs the mountain to enlist the aid of an old friend, the great bird Dyna Blade, who agrees to take the beleaguered puffball on her back to approach the Halberd a third time.

Dyna Blade takes on heavy fire from the Halberd as she approaches, ultimately taking a hit from the cannon's laser blast, but she succeeds in depositing Kirby onto the ship's deck, where he can do his work. The Halberd crew decides to lure Kirby to the foot of the Combo Cannon, which they believe will roast him. Kirby instead destroys it, dealing major damage to the bow of the ship. From there, Kirby makes his way to the wings. After a battle with Mr. Frosty severely damages the left wing, Captain Vul attempts to corner Kirby in the ducts using a repaired Heavy Lobster. Following a brief chase, Kirby lures Heavy Lobster into an open area, and then destroys the robot, the explosion from which destroys the right wing as well. Kirby then makes his way into the hull of the ship as the crew begins to panic. He finds the central Reactor of the ship, and uses its own laser cannon against it to disable the ship's power supply, and free all of the Wheelies that were being used to generate that power.

With the ship powerless and rapidly losing altitude, Kirby heads toward the helm, beating back any remaining crew members who had not evacuated already. Kirby finds himself in the captain's cabin, where he duels Meta Knight directly in a traditional sword fight. Meta Knight is forced to retreat momentarily when Kirby breaks his mask, and the cabin of the Halberd explodes. Kirby is flung away from the explosion, and tumbles down to a lower level of the ship, where he finds a stray Wheelie from the Reactor room. The two team up to ride off the wrecked ship, but a re-masked Meta Knight reappears, suddenly sprouts wings, and desperately tries to stop them from escaping. Kirby and Wheelie manage to flee just in time for the ship to crash into the ocean. With Kirby's work complete, he rides his Wheelie friend down a desert road and off into the sunset, while Meta Knight flies off to parts unknown.

Revenge of Meta Knight plays similarly to the other game-modes, but features a heavy mechanical theme with frantic music and a stylized H.U.D.. The main difference between this game mode and the others is the presence of a time limit in each chapter. If time runs out during gameplay, Kirby immediately loses a life and must restart the chapter or section.

Revenge of Meta Knight is a relatively short game-mode, but it is much more difficult than previous games, featuring tough enemies and relatively few 1-Ups. There are also many auto-scrolling areas and fights with Mid-Bosses and Bosses, many of whom require specific tactics to defeat. Bottomless pits, heavy winds, and other hazards are very prevalent, making traversal tricky, particularly through the tight corridors of the Halberd's interior.

Revenge of Meta Knight takes place in seven chapters, and the player can continue from the chapter they left off. Chapters are divided from each-other using short cut-scenes (with two chapters containing intermediate cut-scenes), which show Kirby's progressive devastation of the Halberd. For information about individual chapters, click the links in the following table:

Revenge of Meta Knight plays out largely the same between the two versions of the game, with all of the same enemies, bosses, and stage design (barring the replacement of Bounder with Gip). However, there are several significant visual changes made in the transition from Kirby Super Star to Kirby Super Star Ultra, particularly in the area of the cut-scenes and the dialogue.

Cut-scenes in the original version are handled with sprite-work, similar to gameplay proper. These scenes are also generally quick, lasting only a few seconds each. Cut-scenes in the remake are handled through pre-rendered 3-D scenes which are generally longer. Additionally, a scene near the end where Kirby falls from the cabin to find a Wheelie is handled in-game in the original, but is handled in a separate scene in the remake.

The dialogue exchanged between the Halberd crew is almost entirely re-written in the remake (with one effect being the severe reduction of the phrase "get Kirby" in the remake). However, the spirit of the dialogue is largely the same between both versions, with the only exception being an exchange between Meta Knight and his men in the final chapter. In addition, the remake adds several entirely new lines of dialogue in various places, often inserted in-between older lines. For a full run-down of the dialogue in both versions, see the Chapter pages. 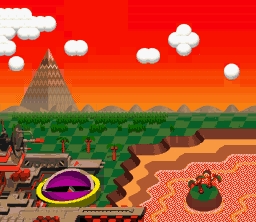