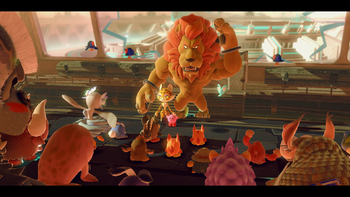 Scene from Forgo Land showing Kirby and Elfilin alongside many members of the Beast Pack.

The Beast Pack is an organization of animals and other characters from both Popstar and the New World which serves as the main antagonistic force in Kirby and the Forgotten Land. It was formed by Leon after Fecto Forgo possessed him as a way to find its lost half and merge with it to become whole. As explained by Leongar in Lab Discovera, the main objective of the Beast Pack was to gather energy and resources for the "Great One" so that it could allow them to transcend their world; doing so in a similar manner to the New World civilization which left all of its infrastructure behind after attaining "planetary warp" technology and leaving to a "land of dreams". Before long, however, it is revealed that this was a trick perpetrated by Fecto Forgo towards its own ends, and it attempts to absorb the Beast Pack into itself instead. After Fecto Forgo is defeated and Leon is recovered, the Beast Pack become friendly toward Kirby and the Waddle Dees who they had previously antagonized.

The Beast Pack - as its name suggests - is largely composed of various creatures which resemble wild animals. By in large, its members are incapable of speech and communicate through growls and body language, with Leongar being the only exception (though it is implied through the Leon and Carol figure description that his ability to speak was granted to him through his direct influence by Fecto Forgo). The creatures that make up the Beast Pack consist entirely of tetrapodal vertebrates, with most of them being mammalian in character, though a few belong to the reptilian, amphibian, and avian clades.

Leon is considered to be the leader of the pack, with Carol as his second in command, and Gorimondo and Sillydillo being the other high-ranking members; all four of which form the "Beast Council".

After a "warp-experiment incident" occurred, which had split specimen ID-F86 into two halves, the inhabitants of the New World later left using the spatial technology acquired from ID-F86. Over time, the native wildlife gained sapience comparable to the previous inhabitants, including Leon and Carol.

One day, Leon stumbles upon one part of ID-F86, Fecto Forgo, in the remains of Lab Discovera, and becomes possessed by its strong telepathic waves to serve as its medium. Leon changes his name to "Leongar" and forms the Beast Pack, and Carol, who is confused but faithful to her fellow beast, follows suit and takes on the name "Clawroline". As the two most influential members of the Beast Pack, the other animal inhabitants of the New World quickly follow their orders: to find Fecto Forgo's other half, Elfilin, so they can become one again.

Fecto Forgo, as part of its plan to obtain even more labor beyond the Beast Pack, opens a vortex above Popstar which transports the inhabitants of Dream Land and its surrounding areas to the New World. Once there, the Beast Pack begins to subdue the weaker residents of Dream Land (namely, the Waddle Dees), and recruit more powerful residents into the pack (either willingly — as with Bonkers, Gigant Edge, and Mr. Frosty — or unwillingly, as with King Dedede). Their attempt to recruit Meta Knight into the pack fails due to his stronger force of will.

The Beast Pack even manages to successfully capture Elfilin, but Kirby, who was also caught in the vortex, arrives in time to rescue him. When Elfilin explains the plight of the Waddle Dees, Kirby agrees to help, putting a wrench into the Beast Pack's plan. After Kirby confronts and defeats Leongar within Lab Discovera, Fecto Forgo reveals its true nature and subsumes many members of the Beast Pack to sustain itself. Even after it fuses with Elfilin to become Fecto Elfilis, Kirby still manages to defeat this monstrosity, resulting in the Beast Pack being formally disbanded.

However, Fecto Forgo keeps Leon captured within its dreams by scattering his soul into pieces and guarding them with illusory versions of the Beast Pack's former members. Kirby and Elfilin enter this realm and collect the pieces of Leon's soul, freeing him after a difficult struggle with a possessed Leon and a mysterious knight who feasted upon Fecto Forgo's soul. With help from the other former members of the Beast Pack, including Carol, Leon is returned to his old self, and all is well.

Excepting Fleurina, the Mid-Bosses of the Beast Pack are creatures from Popstar who came to the New World and were quickly recruited in, gaining a makeover in the process. Wild Edge is the only member who does not appear to intrinsically fit in with the other more animalistic members, though their "wild" makeover does help to cover that difference.