Castle Dedede is a famous structure in Dream Land, home to King Dedede, a retinue of Waddle Dee servants, and a number of other denizens depending on the game or setting it is featured in. Castle Dedede has taken on a number of different appearances throughout the series, but has centered around two essential designs. The first of these is the one that was established in Kirby's Dream Land - being a squared-off two-tiered castle with towers at each corner and a gate and windows which resemble a dour face. The second one is a more elaborate and large castle topped by a massive dome which is featured most prominently in Kirby: Right Back at Ya! and a number of games which released shortly after it. Starting with Kirby: Triple Deluxe, the classic look of the castle would return and continue to be used to the present day, last appearing in Kirby Star Allies.

In addition to inconsistencies regarding appearance, Castle Dedede is also often located in a number of different areas within Dream Land. It is most commonly found atop Mt. Dedede, but it can also be located in gentler grassier areas more akin to where Kirby's House is. Castle Dedede is often subject to partial or total destruction throughout the Kirby series, either at the hands of Kirby himself or from villains.

The final level of the game takes place inside Castle Dedede. Here, Kirby has to go through a series of doors and re-fight the first four bosses before he may face down King Dedede in a wrestling ring. Once defeated, King Dedede is sent flying out the dome of his castle. From there, Kirby uses the power of the Sparkling Stars to grow into a massive balloon and carry the castle across the land, dropping all of the food that King Dedede had stolen out the bottom to rain down on the hungry inhabitants.

As it is a truncated remake of Kirby's Dream Land, Spring Breeze also has its last stage set at Castle Dedede, with the scenario playing out much the same as before (but skipping straight to the fight with Dedede).

In Kirby Super Star Ultra, the last stage of Revenge of the King takes place inside Castle Dedede. Here, Kirby travels through more of the castle (which now has a primarily pink color scheme as opposed to its original orange), and fights off all of King Dedede's minions before facing the king again, now wearing a mask and wielding the powerful jet hammer. Despite this, King Dedede is sent packing once more. 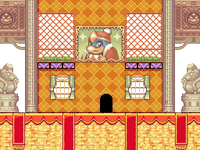 An image of the boss prep room for Prism Plains, which is inside the castle

The later stages of Prism Plains take place within Castle Dedede. Here, the castle resembles its appearance in the anime. Compared to Kirby Super Star, the castle's innards are much darker in color scheme, using earthy browns and reds.

The last stage before facing Yin-Yarn takes place inside Castle Dedede, also using its appearance from the anime. The stage starts out within the lower chambers of the castle, using a similar dark design motif to Kirby Super Star, before working up to the main halls and throne room, which closely resemble the castle's pink color scheme in Kirby Super Star Ultra's Revenge of the King.

Castle Dedede appears in the intro cut-scene. Here, it has been lifted into the air by the Dreamstalk along with Kirby's House. Kirby goes to check in on Dedede when Taranza comes in to steal the king from his Spear Waddle Dees on guard. After making off with Dedede, the castle itself is not seen again until the end of the credits sequence for Dededetour!, where it is safely back on the ground.

Screenshot from the ending of Kirby and the Rainbow Curse. Castle Dedede can be seen in the distance, placed atop an arching cliff like in the anime series.

Castle Dedede makes a brief cameo appearance in the ending cut-scene of Kirby and the Rainbow Curse.

The Play Nintendo comic "In the Name of Fashion" depicts the scene where Castle Dedede's colors are removed, revealing that King Dedede and Meta Knight were present on the castle's balcony throughout the game.

Castle Dedede appears briefly in the intro and ending cut-scenes for this game. King Dedede tries to fire cannons from his castle at the approach of the Access Ark, but a giant laser is fired at the castle which destroys it utterly. Later on, King Dedede and his Waddle Dees are found in the rubble, relatively unharmed.

In the sub-game Kirby 3D Rumble, Castle Dedede appears in the background of each level, at the right. It can only be seen if the player plays the game on a New Nintendo 3DS and moves the C-Stick so the camera faces towards the ground.

Castle Dedede appears in the intro cinematic. King Dedede is enjoying fair weather and refreshments when a Dark Heart lands on his balcony. King Dedede attempts to get a closer look, but is quickly enveloped in the heart's influence.

Kirby and his squad of star allies visit the castle in one of the stages, due to the king having stolen all of Dream Land's food yet again. Its interior in this game has an orange color scheme, with red, gold, and blue bunting that matches King Dedede's own motif. Once they reach the throne room, they see the king gorging himself on a pile of rotting food, and a battle ensues. Here, King Dedede becomes much more muscular, and breaks many floors of his own castle during the fight.

Castle Dedede, seen from the distance with the Halberd

The castle about to be engulfed Subspace by the Ancient Minister and his R.O.B. Squad.

Castle Dedede makes its only appearance in the Super Smash Bros. series in Super Smash Bros. Brawl. It appears only in The Subspace Emissary mode, where it somewhat takes an important role in the game's plot. Interestingly, Brawl's version of Castle Dedede is reminiscent of the gothic architecture from the 12th century. It is located in the World of Trophies, on top of a wasteland-like area, surrounded by mountains and dead trees. During the game's story, King Dedede puts Dedede Brooches on his captured trophies, but then is knocked out by pieces of the ceiling that fall on him. Later, the castle is sucked into Subspace using a Subspace Bomb by the Ancient Minister.

At the end of the game, Castle Dedede, along with other locations, is restored to its place. 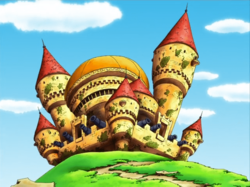 Castle Dedede as it appears in Kirby: Right Back at Ya!

In Kirby: Right Back at Ya!, Castle Dedede is one of the major landmarks in Dream Land and the home of many of the show's characters. As such, it makes several appearances as a setting for the episodes. Castle Dedede is perched atop a perilously steep cliff face overlooking Cappy Town with a long winding road leading up to it. The castle itself is home to a very large number of Waddle Dees (so many in fact that not even their Captain Waddle Doo knows how many there are) who act as servants in exchange for the living space. It is from within the castle that King Dedede and Escargoon call upon Night Mare Enterprises to send them more monsters using a built-in teleportation system. These monsters more often than not end up damaging or destroying the castle, though it is always rebuilt by the next episode.

In addition to those mentioned above, Castle Dedede is home to the following characters:

Notably, King Dedede himself inherited the castle from a line of unspecified ancestors. He tells Escargoon in one episode that the castle was built to look older than it really is, in order to enhance the family's perception as an ancient and noble dynasty.

Castle Dedede is not the only castle which Dedede has resided in. Other castles he has lorded over include the following:

Taranza escapes through the roof with King Dedede in Kirby: Triple Deluxe
Retrieved from "https://wikirby.com/w/index.php?title=Castle_Dedede&oldid=356044"
Categories: