Mr. Dooter (parsed Mr Dooter in the British English version) is a boss that appears in Raisin Ruins of Kirby's Return to Dream Land that resembles a cross between a magician and a genie. He wears a turban as part of his costume and his attacks are characterized in the style of a magician or street performer. He guards the Lor Starcutter's Right Wing.

Mr. Dooter's body is vaguely bowling-pin shaped, with a light blue complexion to his skin. His face consists only of two pairs of eyes, and he has no feet or arms, sporting disembodied gloves reminiscent of Magolor's physique. He wears a turban, as mentioned earlier, which sports a feather and a gem inset on the front, and his main dress is what could only be described as 'regal djinni wear', with gold accent and a red vest.

When his health is half-depleted, Dooter will cast a spell upon himself to increase his size, then will open up with more aggressive attacks.

In Extra Mode, Mr. Dooter has red skin with a blue-feathered turban and a black vest. Most notably, he is also sporting a mustache. 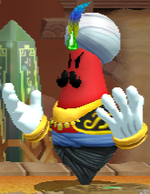 The following lists all of Mr. Dooter's attacks in the Main Game of Kirby's Return to Dream Land. Attacks in italics are used in the second phase of the fight only.

In Extra Mode, Mr. Dooter gains a variety of new and better attacks to use against Kirby.

Once defeated, Mr. Dooter will fall onto his back, his turban popping off. He will then explode, revealing the Lor's Right Wing.