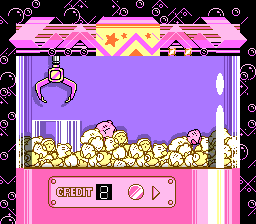 Crane Fever - one of the first Sub-Games seen in a Kirby title.

This article is about smaller separate game modes in various Kirby games, and should not be confused with the Minigame mode in Kirby's Dream Buffet.

A Sub-Game[1] (also known as a Bonus Game,[2] Sub Game,[3] Mini-Game,[4] Subgame,[5] or Minigame[6]) is a smaller separate game or activity contained within a game in the Kirby series. It typically has rules and gameplay completely different to the larger game it features in, and completing the Sub-Game typically is not required to complete the main game, but may offer bonuses like score or 1-Ups, or contribute to 100% completion. They may be accessed as bonus content within the main game itself, or be completely separate, and accessible from the main menu. Some Sub-Games have also been the source for larger standalone spin-off titles, particularly in later installments of the series.

Most games in the Kirby series include at least two Sub-Games. There are few, if any, Sub-Games that are considered to be part of the official Kirby canon, however.

The first game to feature distinct Sub-Games with completely different rules to the main game, these side activities could be found within the stage select area in the main game. Completing them rewarded Kirby with either points or 1-Ups, depending on how well he did in the game.

There are three different Sub-Games in Kirby's Adventure. They are:

In Kirby: Nightmare in Dream Land, the Sub-Games are almost entirely different, and can be played with up to 4 players. They are:

Each main course has a bonus game inset which can be accessed via Warp Star. There are three in all, which award extra points when played, and are as follows:

Kirby's Dream Land 2, in addition to its Goal Game, also has extra Sub-Games that can be played once by re-visiting the Bosses of each level, referred to as a Bonus Chance. Instead of fighting the boss as usual, Kirby and/or his animal friends will instead play a bonus game with them, the rules of which vary with each boss.

Kirby can play one of these if he touches a Warp Star found in the stages. The games are as follows:

Kirby Super Star and its remake Kirby Super Star Ultra could be considered to be entirely made up of Sub-Games, as the main story is split into several distinct installments, individually selectable on the main menu. There are a number of other smaller games, however, which do not appear to be in the same continuity, and are largely for fun. These games are as follows:

Each third stage in the main levels of Kirby's Dream Land 3 have a mini-game which involves guessing between various objects/sounds. Completing these is necessary to obtain the Heart Stars in the stages they appear in.

Once the game is complete, these minigames can be played in sequence in the menu - collectively called MG5. Completing this with a perfect score unlocks another game called Jumping, which is a challenge based on the Goal Game, having Kirby try to land as many times as possible without getting hit by a Tick.

There are three Sub-Games in this title, which are played completely separate to the main game, and support up to 4 players. They are:

Players in each of these games can choose between playing as Kirby, Adeleine, King Dedede, or Waddle Dee.

In Kirby Tilt 'n' Tumble, if Kirby collects a Blue Star then completes the stage, he'll be taken to the "Bonus Star!" sub-game gallery where he can choose to play any of the following sub-games:

Like with Kirby 64: The Crystal Shards, the Sub-Games present in this title are completely separate from the main game. They are:

These are also multiplayer-supported, with each player taking on a different color of Kirby. 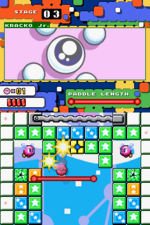 The Sub-Games in Kirby: Canvas Curse are unlocked by completing the second level of each in the Boss fights in the main game, and are similar to the Boss fights in question. Unlike in most games, Kirby will get a Game Over if he fails these Sub-Games. They are as follows:

In Kirby's Epic Yarn and Kirby's Extra Epic Yarn, there are a total of five unlockable Sub-Games that can be unlocked as more tenants are attracted to Quilty Court. Kirby may talk to a tenant to begin a Sub-Game with them. These Sub-Games are variations on regular stages, requiring the player to complete specific conditions.

The Sub-Games for Kirby's Epic Yarn are as follows:

In Kirby's Extra Epic Yarn, two additional Sub-Games are added, featuring King Dedede and Meta Knight, respectively. They are accessible from the main menu and are now required for 100% completion. They are as follows: 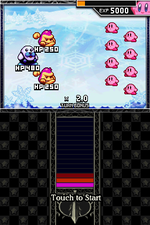 The Sub-Games in Kirby Mass Attack are unlocked in a separate menu by collecting medals and earning achievements. There are several, though some are smaller than others:

There are two primary Sub-Games in Kirby's Return to Dream Land, which can be played either from the main menu or from inside the Lor Starcutter. To unlock them from either location, Kirby and his friends must collect enough Energy Spheres to unlock each door.

These games are as follows, and can be played with up to 4 players:

In addition, there are a number of single-player Challenge Stages that are also unlocked using Energy Spheres, accessible only from inside the Lor, which task Kirby with using a certain Copy Ability (or items) to complete an obstacle course with as high a score as possible.

Completing these Sub-Games is a requirement for 100% completion, but not to complete the main game.

In Kirby's Return to Dream Land Deluxe, Ninja Dojo from the original game returns alongside seven other sub-games from previous games and three new ones. The sub-games are available within Merry Magoland and are as follows:

Notably, Scope Shot is absent in this game for unknown reasons, likely replaced by Gun Gun Blasters, as their Japanese names are similar and the new one is very reminiscent of the old one.

The New Challenge Stages Sub-Game can be considered to be an expansion of the concept from Kirby's Return to Dream Land, and comes with its own little side-story and credits roll. In addition to the usual stages, Kirby can also race Magolor at the end of each level.

There are two primary Sub-Games featured in this title, and completely separate from the main game. They are as follows:

Both of these titles must be completed to a certain satisfaction in order to achieve 100% completion of the game. These two Sub-Games were also used as the base to create the standalone spin-off titles, Dedede's Drum Dash Deluxe, and Kirby Fighters Deluxe.

Playing a Challenge Mode stage in Kirby and the Rainbow Curse.

In Kirby and the Rainbow Curse, a set of 48 distinct extra stages can be played, which are unlocked by meeting various objectives throughout the game. These stages feature a set of single rooms where the goal is to collect a Treasure Chest in 15 seconds or less. Most stages consist of four such rooms in sequence, referred to as One-Minute Challenges due to the combined maximum length of the rooms in these stages. The remainder are Survival Challenges where 12 rooms need to be played in sequence and failing to get a chest in time at any point forces a full restart of the stage. After completing (or failing) a stage, a Medal is awarded for that stage based on how well the player did, from none to Gold.

Like Triple Deluxe, there are two primary Sub-Games featured in this title, and are completely separate from the main game. They are as follows:

Both of these titles must be completed to a certain satisfaction in order to achieve 100% completion of the game. These two Sub-Games were also used as the base to create the standalone spin-off titles, Team Kirby Clash Deluxe, and Kirby's Blowout Blast.

This title features two very small Sub-Games, unlike its 3DS predecessors. They are as follows:

Both of these need to have all three difficulty levels unlocked to earn 100% completion in Kirby Star Allies.

In addition, Version 4.0.0 of the game adds a new more challenging adventure called Heroes in Another Dimension. This plays much like an Extra Mode, but features totally unique stages to the main story mode.

Playing Flash Fishing in Kirby and the Forgotten Land.

This title features three small Sub-Games. Due to Waddle Dee Town acting as the game's main menu, Kirby can freely walk up to and play them, provided he already unlocked them. They are as follows:

All of these need to have all three difficulty levels completed to earn 100% completion in Kirby and the Forgotten Land. The only exception is Flash Fishing: due to this sub-game only having one difficulty level, the player needs to reel in the Bling Blipper instead.

Recurring modes not considered to be Sub-Games[edit]

An Extra Mode may be considered to be a Sub-Game by some standards, but is effectively a re-playing of the main game with new rules and/or challenges. The first game to employ an Extra Mode was Kirby's Dream Land (then named "Extra Game"), which added more enemies to the game, reduced Kirby's maximum health, and gave the Bosses new attack patterns to increase the challenge.

Other forms of Extra Modes include time trials of the main story, most notably the series of Meta Knightmare modes that appear in three distinct Kirby titles, where the objective is to play through the main game as Meta Knight and win as quickly as possible.

The Goal Game is a Sub-Game of sorts that appears in numerous Kirby titles, starting with Kirby's Adventure. The Goal Game is effectively a mini game that is played at the end of each stage, where bonus points, 1-Ups, or other items can be earned. This typically involves having Kirby use a trampoline, cannon, or simply a jump and timing to land on the best space possible.

The Arena & other Boss Endurance Modes[edit]

While technically Sub-Games, these modes are typically treated with more importance than typical Sub-Games are in the series. Each of these modes pit Kirby or another character against all of the Bosses in the game in question, one after another, with various restrictions usually involving limited-to-no recovery items in-between.