This article is about the character in the anime series. For the Mid-Boss from the games, see Chef Kawasaki.

Chef Kawasaki is a recurring supporting character in the anime series; Kirby: Right Back at Ya!, first appearing in A Blockbuster Battle, though not playing a major role until The Big Taste Test. He owns and runs the only restaurant in Cappy Town, which typically serves east Asian-style cuisine. His cooking is described as awful by most of the cast, but they occasionally eat there anyway when they do not feel like having a meal at home. The only person in town who consistently enjoys Kawasaki's food is Kirby, which goes in part to explain why Kirby and Kawasaki are strong allies most of the time. Despite his reputation, Chef Kawasaki takes his craft seriously, as he was taught by the famous Chef Shiitake, whom he idolizes. Like the rest of the villagers, Chef Kawasaki is not fond of King Dedede, but he does not typically try to challenge the king, especially in the rare cases where Dedede comes to eat at his restaurant.

Chef Kawasaki is among the more emotionally expressive members of the cast, and tends to show it very overtly. His dream is to become a world-famous chef, but this is hampered by his inadequate cooking ability. Despite knowing all the techniques and having access to fresh and high-quality ingredients, his food invariably comes out not tasting good for reasons not apparent to him or anyone else. Sometimes it is suggested that he may accidentally swap out sugar for salt in certain recipes, or other times he may neglect proper sanitation or cook things at an improper temperature or for an improper amount of time. Whatever the case may be, the most likely explanation for Chef Kawasaki's lack of results is that he always tends to forget some crucial step or another in the preparation process. Kirby is the only character who consistently enjoys his food, though that is largely due to Kirby's high tolerance to the things he eats in general. Despite most of the town's opinions on his cooking, Kawasaki insists that it tastes okay to him. He often deflects this scrutiny by making self-deprecating jokes about his own cooking or his reputation, and sometimes even intentionally leans into his poor cooking by using it to punish King Dedede in the episodes A Spice Odyssey and Sweet and Sour Puss.

Generally speaking, Chef Kawasaki is fairly careless and oblivious regarding the things he says and does, which tends to annoy the other Cappy Town residents. He sometimes also foregoes his sense of moral obligation if it means accomplishing his goals, which sometimes ends up putting Kirby in a dangerous situation. Despite this, Kawasaki usually comes around and does the right thing when he needs to, which often means throwing his frying pan to Kirby to help him win a fight. Kawasaki will also often go out of his way to help Kirby, even if he was not otherwise responsible for the trouble. This alliance with Kirby draws the respect of both his old teacher Chef Shiitake and his peer Chef Nagoya, who otherwise would have been disappointed in his lack of results.

In addition to cooking, Chef Kawasaki can also sometimes be seen fishing. He will often bring his catches back to his restaurant to make into sushi, and can demonstrate remarkable skill in this particular craft, as seen in A Princess in Dis-Dress. 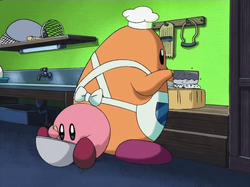 Despite the two sometimes getting into misunderstandings, Chef Kawasaki typically has Kirby's back, since Kirby is the only resident of Dream Land who consistently enjoys Kawasaki's cooking.

Chef Kawasaki is among the most noteworthy of the supporting cast for Kirby: Right Back at Ya!, as he has a prominent role in several episodes, particularly those that revolve around the subject of food and cooking. Despite how bad he is at cooking, he still devotes his life to the craft, and his emotionality makes it clear even to those who despise his food how much it means to him. This situation often draws sympathy from Tiff, who will often go out of her way to try and help Kawasaki improve his business savvy, his cooking, or both, though not often with much success. The most notable examples of Tiff trying to help Kawasaki come from the episodes A Spice Odyssey (where she tries to help him compete against Monsieur Goan), Delivery Dilemma (where she helps Kawasaki set up a delivery service), and A Chow Challenge (where she gives him covert cooking advice to compete with Chef Nagoya).

However, Kawasaki is also notable for being among the most easily swayed by the idea of turning a profit or enhancing his reputation, which makes him among the most susceptible to King Dedede's schemes. In the cases of The Big Taste Test, Dedede's Raw Deal, and Hunger Struck, Chef Kawasaki's involvement in these various schemes ends up either directly or indirectly contributing to putting Kirby in harm's way, whether he realizes it or not. Kawasaki usually gains an opportunity to redeem himself, however, when he helps Kirby out of a jam, even in episodes where he otherwise did not have a significant role. Kawasaki frequently tosses Kirby various things to help him overcome monsters, whether it be his frying pan to grant Kirby the Cook Copy Ability, a tray of ice cubes to grant him Ice, or a plate of curry to imbue Kirby with energy or overwhelming heartburn (both of which are used to defeat monsters). Kawasaki also demonstrates his bravery when he agrees to accompany Meta Knight and his crew aboard the Halberd to defeat eNeMeE in the series finale, even carrying the explosives they use to blow up the fortress.

Despite this prominent showing in the series, Chef Kawasaki spends most episodes as a peripheral character who may only see a moment or two of screen time. Typically, his minor appearances either involve food in some way, have him comment on his bad reputation as a chef, or simply make a remark that highlights his general naivete.

Chef Kawasaki appears in a majority of episodes in Kirby: Right Back at Ya!, though his role is often incidental. For a full list of Chef Kawasaki's episode appearances along with details of his role in each one, see his filmography page.