Waddle Doo is an iconic round orange creature and distant relative of Waddle Dee, sharing many of that creature's characteristics save for the single large eye in place of a face and the ability to fire beams from it. He is most commonly encountered in the Kirby series as an enemy, but he can be recruited as a helper in appropriate games and in some instances is playable aside from that. Waddle Doo attacks primarily by firing his aforementioned eye beam, but will otherwise harm Kirby by collision or by trying to body-slam him, as seen in Kirby 64: The Crystal Shards. Swallowing Waddle Doo will typically yield Kirby the Beam ability, and if holding a parasol, he will yield Kirby the Parasol ability.

Waddle Doo bears a very similar physique to Waddle Dee (and Kirby by extension), and can often be found in the same situations as his more down-to-earth cousins. If not distinguished by his eye, Waddle Doo also differs in his color scheme, bearing a more orange-red (described in Kirby's Dream Buffet as "ketchup") body hue with orange-yellow feet. Given that Waddle Doo's face consists only of a single giant eye with two thin eyelashes on top, he can only meaningfully communicate his emotions using eye-based expressions such as tears, dilation of his pupil, and movements of his eyelid. Despite this, Waddle Doo is capable of speaking, as evidenced in Kirby Battle Royale and Kirby: Right Back at Ya!.

Waddle Doo is often associated with the reoccurring Boss Kracko, who is able to conjure them in most of his appearances and also has a giant singular eye which can fire beams. Another form of Waddle Doo was created when Dark Matter possessed the Waddle Dee in Kirby 64: The Crystal Shards. Waddle Doo also has a much larger Mid-Boss cousin known as King Doo who appears in Kirby's Return to Dream Land and Kirby: Planet Robobot, along with a few other titles.

Waddle Doo first appeared in Kirby's Dream Land. He stands in place and will attempt to fire beams at Kirby. Since there are no Copy Abilities in this title, he provides nothing if swallowed. He is also summoned by Kracko.

Waddle Doo can be found in every stage except for Green Greens. 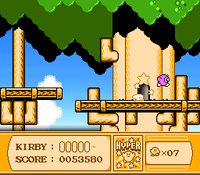 Kirby chasing after an errant Waddle Doo in Kirby's Adventure

In Kirby's Adventure, Waddle Doo is a semi-common enemy who famously bears the Beam ability, as he is the very first ability-providing enemy that Kirby encounters in the first stage of the game. He also appears in Kirby: Nightmare in Dream Land.

In addition to his role as an enemy, Waddle Doo appears as an opponent in both versions of Quick Draw.

In Kirby's Adventure and Kirby: Nightmare in Dream Land, Waddle Doo can be found in the following levels and stages:

Waddle Doo's image appears as part of the roulette machine in Wispy-Woods Land. If all three slots match Waddle Doo's image, any Maxim Tomato and Energy Drinks present on the board will be removed. Waddle Doo is the only enemy represented in Kirby's Pinball Land who does not actually make a personal appearance.

Waddle Doo appears as an enemy on the courses in this game, where he is always seen with a parasol in hand. As such, this is the only game in the series where Waddle Doo exclusively provides the Parasol ability.

Waddle Doo (abbreviated as WADO in this game) is the third and final opponent faced in the 'Lessons' stages. He has no particular patterns or behaviors, and is not particularly tough to defeat. 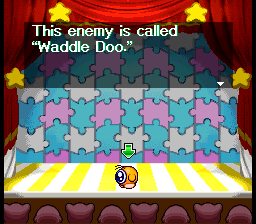 In Kirby Super Star, Waddle Doo is a rather common enemy that attacks using his characteristic beam. Waddle Doo can also serve as a Helper (who is slightly lighter orange than a standard Waddle Doo), created out of the Beam ability. He can also be conjured by Kracko Jr. and Kracko and appears at the beginning of the battle against the former.

Waddle Doo appears as one of the opponents in Samurai Kirby. He also appears as a card in Kirby Card Swipe and as a target in Kirby on the Draw.

In Kirby Super Star Ultra's Helper to Hero, Waddle Doo is one of the playable Helpers, bearing a light green color.

Waddle Doo does not appear as a regular enemy in Kirby 64: The Crystal Shards. Instead, he appears as the form Kirby's Waddle Dee friend takes when he is possessed by Dark Matter. Kirby fights Waddle Doo as a mid-boss in the game after a dramatic cutscene showing Waddle Dee being possessed, and, peculiarly enough, Waddle Doo does not fire beams from his eye in this iteration. Instead, he merely tries to run into and/or body-slam Kirby. Most of his attacks end up with him tripping and hurting himself (though this does not end up actually damaging him).

Waddle Doo returns in Kirby Tilt 'n' Tumble, and serves a similar function of firing beams, though from a top-down format. Given the nature of the game, he does not provide any special abilities upon defeat. Like Waddle Dees, Waddle Doo can be defeated by popping up the Game Boy Color to turn him into a star piece.

Waddle Doo can be found only in Lvl 4-1. 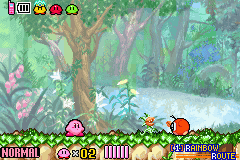 Waddle Doo returns in Kirby & The Amazing Mirror, unaltered from his appearance in Kirby: Nightmare in Dream Land and still providing the Beam Ability as usual.

In Kirby & The Amazing Mirror, Waddle Doo may be found in the following areas and rooms: 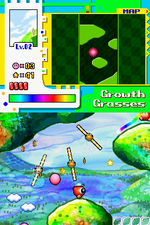 Waddle Doo also appears as one of the objects which can be painted in Paint Panic.

In Kirby: Squeak Squad, Waddle Doo appears as an enemy, with the exact same look and characteristics that he had in Kirby & The Amazing Mirror. Here, Waddle Doo can be possessed by Ghost Kirby, whereupon he can be made to walk, jump, and fire his beam, though this last action requires a little charge-up.

In Kirby: Squeak Squad, Waddle Doo can be found in the following levels and stages: 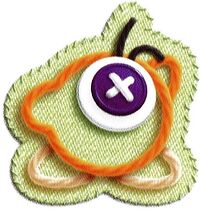 In Kirby's Epic Yarn, yarn versions of Waddle Doos appear as somewhat common enemies, though they are imposters made by Yin-Yarn. Upon spotting Kirby, the yarn Waddle Doo will shoot a laser out of its button eye. It will adjust its hair after shooting the laser.

In Kirby's Extra Epic Yarn, Waddle Doos appear both in the main game and in Stage 3 of the Sub-Game Slash & Bead. Here, they behave as they normally do, though Meta Knight is able to slash them with his sword or defeat them with his Special for a reward of beads.

Waddle Doo can be found in the following stages in Kirby's Epic Yarn and Kirby's Extra Epic Yarn.

Waddle Doo does not appear in the main game of Kirby Mass Attack. However, he does appear as an enemy in the sub-games Strato Patrol EOS (as Parasol Waddle Doos, summoned by Kracko) and Kirby Quest. Captain Waddle Doo from the anime also makes an appearance in Kirby Quest.

An in-game Waddle Doo from Kirby's Return to Dream Land

A similar enemy, known as King Doo appears as a Mid-Boss.

In Kirby's Return to Dream Land, Waddle Doo can be found in the following levels and stages:

In addition to appearing in the games featured in this collection, Waddle Doo also appears as a common enemy in the New Challenge Stages, where he behaves much as he did in Kirby's Return to Dream Land. However, due to the nature of the game, Kirby cannot obtain the Beam ability from him here. 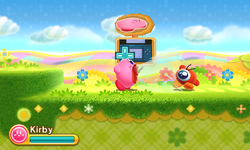 Kirby doing as instructed and inhaling a Waddle Doo in Kirby: Triple Deluxe

Waddle Doo appears again in Kirby: Triple Deluxe, reprising his role from his previous appearances. One of the stage bosses, Kracko, will summon Waddle Doos to attack Kirby.

In Kirby: Triple Deluxe, Waddle Doo can be found in the following levels and stages:

Waddle Doo reappears in Kirby: Planet Robobot, reprising his role from past installments. He now also provides the Beam ability for the Robobot Armor.

Waddle Doo also appears on two stickers. One depicts him as a "doodle", presumably drawn by Kirby, and the other depicts him in ball form from Kirby: Canvas Curse.

In Kirby: Planet Robobot, Waddle Doo can be found in the following levels and stages:

In the Dedede's Cake Royale mode of Kirby Battle Royale, a Waddle Doo operates the check-in desk for tournament battles. He presents Kirby with the battles in his current league, and informs Kirby when he has enough League Points to enter the qualifier rounds.

A Waddle Doo can also be seen in the audience for Crazy Theater, wielding two glow sticks and flailing them with much more gusto than the Waddle Dees in the crowd. 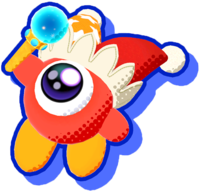 Artwork of a friend Waddle Doo from Kirby Star Allies

Waddle Doo returns as a standard enemy in this title. He can also become a friend, representing the Beam ability. As such, he can provide the Zap element to weapons and help perform moves like Zap Splasher. Notably, when Waddle Doo is recruited as an ally, he no longer shoots the beam from his eye, but uses a wand to match Beam Kirby.

Naturally, Waddle Doo has his own adventure in Guest Star ???? Star Allies Go!, called "Beam Land" (a pun on "Dream Land"). He is also selectable in The Ultimate Choice.

In Kirby Star Allies, Waddle Doo can be found in the following levels and stages:

Waddle Doo does not appear directly in Kirby's Dream Buffet. However, a Costume in his likeness is available for Kirby to wear, which fittingly gives him a large eye and two strands of hair. A Color is also available, which resembles Waddle Doo's color scheme, called "Doo Ketchup". Together, these make Kirby greatly resemble Waddle Doo, making it seem like he is a playable character. Additionally, Waddle Doo appears on three Character Treats; one depicting his artwork from Kirby's Dream Land, another depicting his sprite from Kirby's Adventure, and the third depicting him as part of the Friend Circle treat.

Waddle Doo appears as a Spirit in Super Smash Bros. Ultimate, and is obtainable by defeating him in World of Light, the Spirit Board, or by buying him in the Shop. He is a Novice-level Attack-type primary spirit with one support slot and no additional effects. His level 1 stats are 517 attack and 486 defense, and his level 99 stats are 2,585 attack and 2,434 defense. His spirit battle involves three red Kirbys with Super Scopes over an electrified floor on the Dream Land (64) stage.

Artwork of Waddle Doo from the anime.