Cleaning, also known as Clean or Broom,[1] is one of eight Copy Abilities that Kirby can acquire from his enemies in Kirby's Dream Land 3. It also appears as an ability in Kirby Star Allies. The ability can be obtained from broom-related enemies, and its attacks are also usually associated with cleaning or broom-related activities.

In its most basic form, Cleaning is somewhat unremarkable, only involving Kirby sweeping the ground with a broomstick, throwing up dust that can harm enemies at very close range. Its true potential comes when paired with an Animal Friend, giving Kirby a number of much more potent techniques, including dashing forward with Nago, sweeping in a much larger area with Coo, and even flying with ChuChu. In Kirby Star Allies, Cleaning is upgraded significantly, giving Kirby much more effective broom sweeps and also allowing him to call on many of his animal combinations at will. The Cleaning ability is also infused with the Bluster and Splash Power Effects, able to impart these on allies' weapons. In Kirby: Right Back at Ya! and Kirby Star Allies, Kirby wears a yellow or white bandana with green stars on it when he has this ability.

When Kirby or Gooey possesses the Clean ability in Kirby's Dream Land 3, they may use a broom to clean the area in front of them when the Y button is pressed. Apart from being able to hurt adversaries with the cleaning instrument itself, performing this action causes white dust clouds to be raised in front of Kirby or Gooey, which act as harmful projectiles towards opponents. As such, they can be reflected back by a Dogon.

Like other Copy Abilities, the basic Clean ability can be enhanced by uniting with an Animal Friend, the resulting power depending on the Friend that Kirby teams up with. The following combinations are possible:

While the ability is not present in the game itself, it does appear as two of the collectible Keychains, one being Kirby using the ability alone, while the other is the combination with ChuChu.

An image from the Kirby JP Twitter showing the various Animal Friend cameos in the Cleaning Abilities, and comparing them to the Kirby's Dream Land 3 counterparts.

Clean returns in this title after a 21-year absence from the series, now called Cleaning. When Kirby gains the Cleaning ability, he is given a broom and a white bandanna with green stars on it. The ability gains a number of combo attacks, much like other abilities in the game, with several causing the Animal Friends from Kirby's Dream Land 3 to cameo in the process. Cleaning also gives the Bluster element with its standard sweeps along with 'Clean ChuChu', while the Splash element is provided through the 'Clean Nago' and 'Clean Pitch' moves. Broom Hatter represents the ability as its Friend.

In Kirby: Right Back at Ya!, the Clean ability appears, under the name Cleaning.[2] Unlike in Kirby's Dream Land 3, Kirby's appearance changes when he obtains the power in the anime, causing him to don a yellow bandanna with green stars.

In a similar manner to the Kirby's Dream Land 3 base ability, Cleaning enables Kirby to use a broom to attack; unlike in the game, however, it possesses a blue handle, looks more modern overall and is able to generate colorful stars instead of dust clouds when swung. 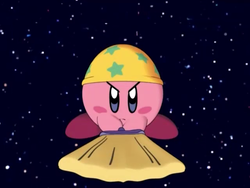 The end of the Cleaning transformation sequence.

The ability first appears in the episode A Novel Approach. Here, Kirby acquires it by absorbing one of the brooms sent at him and his friends by Broom King, a Monster that resembles Haboki. After obtaining it, Kirby uses the ability to brush numerous besoms aside, proceeds to use it as a blunt melee weapon against Broom King itself and eventually sweeps a large cloud of dust back at his adversary with it. Similarly to the Clean + ChuChu combination, Kirby subsequently climbs onto the cleaning instrument and uses it to fly, pursuing Broom King through the air and defeating it with a final sway of his broom. Although he does not use the ability anymore afterwards, Kirby keeps his Cleaning attire and broom until the end of the episode.

Cleaning reappears in A Trashy Tale, where Kirby acquires it from a besom thrown to him by Meta Knight. In this episode, Kirby makes use of the ability to knock the various forms of waste sent at him by Trash Basher out of the way, as well as eventually finish off the trash can monster itself when it has run out of refuse.

After disposing of Trash Basher, Kirby finally demonstrates the ability's literal cleaning powers, using the colorful, sparkling energy generated by his broom to do away with all the garbage that has accumulated in Chief Bookem's house and all over Cappy Town throughout the episode.