Mr. Shine & Mr. Bright are a duo boss in Kirby's Adventure, Kirby's Dream Land 2, Kirby's Avalanche and Kirby: Nightmare in Dream Land. They also make appearances in Kirby's Dream Land 3 (as paintings created and brought to life by Ado) and in Kirby: Canvas Curse (where they cameo as drawings in the Paint Panic Sub-Game); in the latter, however, they are drawn separately.

The two are based on the moon and the sun, except with arms, legs, and facial features. Mr. Shine is the moon, while Mr. Bright is the sun. Their facial expressions vary from scowls to grins, and their yellow or white limbs are thin and flexible, albeit relatively short. 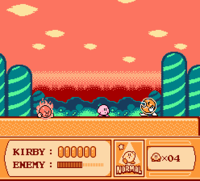 The beginning of the fight in Kirby's Adventure

Mr. Shine & Mr. Bright made their debut in this title, serving as the boss of Butter Building. They fight against Kirby in a tag team style: one hangs in the air while the other one attacks on the ground, using tackles and other moves against Kirby. The one in the air offers various support attacks to their partner. The time of day appears to shift if Mr. Shine appears in the air, as this dims the stage.

To defeat the duo, Kirby can use the Drop Stars that appear from the attacks of the hanging foe to strike at the grounded foe, or by repeatedly using his Copy Ability if possible. Alternatively, Kirby can gain the Cutter ability by swallowing the stars that drop when Mr. Shine is in the air, or gain the Fire ability by swallowing the stars that appear from Mr. Bright's sunbeam attack. After taking enough damage, Mr. Shine and Mr. Bright crash into each other and explode, leaving a Star Rod piece behind in the twilight for Kirby to collect.

Mr. Shine and Mr. Bright appear separately in the uppermost board of Kracko Land. Mr. Bright appears first, and must be hit three times to defeat, worth 900 points for each hit. Once he is defeated, Mr. Shine then appears, who must also be hit three times, though with each hit now being worth 1800 points. Once Mr. Shine goes down, a Warp Star appears which can take Kirby to the boss board against Kracko. 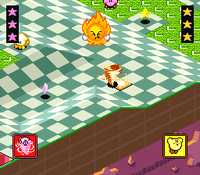 Mr. Bright appearing to change the time of day in Kirby's Dream Course.

The duo boss in Red Canyon

Mr. Shine & Mr. Bright are fought at the end of Red Canyon. Their attack pattern is largely the same as their previous appearance, but they are given a new move, wherein one of them eclipses the other, causing everywhere but the shaded area to flash, hurting Kirby if he's out there. Notably, Kirby can acquire the Burning Copy Ability by inhaling the drop stars that appear when Mr. Bright uses his sunbeam attack.

The duo boss also appears in the Red Canyon Bonus Chance, where Mr. Bright tosses out Mini-Stars and Kirby has to dodge both Mr. Bright's attacks, and Mr. Shine's body bouncing along the floor.

Mr. Shine and Mr. Bright appear in Stage 5 of this title. Mr Shine actually appears on his own in round 4, and needs to be hit 4 times to be defeated, worth 5000 points. In round 5, he appears again as the Boss, and has 6 hit points. Once he is defeated, Mr. Bright appears, who also has 6 HP. Defeating both of them yields 50000 points and clears the stage.

Mr. Shine and Mr. Bright are among the enemies painted by Ado at the end of Cloudy Park. They fight like they usually do, though in a subdued manner. 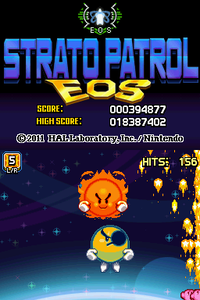 Mr. Shine & Mr. Bright appear in Strato Patrol EOS as the bosses of stage 3. They use very similar attacks to their previous appearances; Mr. Shine rolls across the screen to harass the Kirbys, while Mr. Bright fires beams from his hands and solar waves from his body. If Mr. Bright is defeated first, Mr. Shine will revive him. This means that Mr. Shine should be defeated first if the player is aiming to defeat them quickly; if one is aiming for a high score, however, they should focus on defeating Mr. Bright as many times as possible.

If Kirby defeats Mr. Bright multiple times, the two will eventually merge into one being. This new form can use the attacks of both Mr. Shine and Mr. Bright at a much faster rate, but defeating him will take him out for good.

Mr. Shine & Mr. Bright appears together as a regular Keychain, under their Kirby: Nightmare in Dream Land appearance.

In Kirby and the Rainbow Curse, what appears to be Mr. Bright appears as a cameo in the 19th Secret Diary page, where he is being depicted as sunny in the weather forecast.